Ever go to a hockey game and have a fight break out? How about go to a late season open wheel championship points chase and have a massacre and a bunch of vehicle carnage pop up?

Many who follow and witnessed the last IZOD IndyCar Series championship race probably felt they were treated to both type of events at the race in the streets, the Grand Prix of Baltimore presented by SRT. 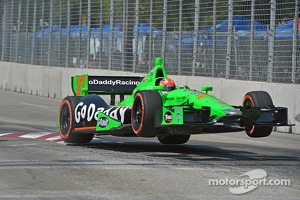 With only four races left in the 19 race season, the bumpy, uneven-surfaced, chicane and tight hairpin element-ed 2.04 mile 12-turn temporary street track delivered a tough championship test for all men, a woman, and Dallara DW12 machine which seemed to be shaping up to deliver an eleventh new winner in a season, tying a record that had been standing for over a decade (2000 and 2001 CART/ChampCar seasons).

In the morning warm-up, Dragon Racing's four-time past ChampCar champion Sebastien Bourdais was very quick after damaging his car by hitting the corner tires in the chicane during qualifications. Bourdais started the race from P22 of a 24 car field and through skillful and aggressive driving managed to work his way through the many YELLOW Flags (six full course cautions with almost every car sustaining some damage) on restarts to lead the race for 19 laps. "SeaBass" ended up on the podium at P3 ... but not without a fight. "We had a fast car. We had a fast car all the way to the end of the race. That car got beat up pretty good, so by the end it was pretty ragged. I am just really happy for the guys. Yeah, it would have been awesome to win and in so many ways I guess we should have or would have. But you know, it’s the podium………another one, and its really important for the group. For the spirits, for Jay, for the sponsors: McAfee, TrueCar, and Chevy. Still pretty happy because when you start nearly dead last and you make it to the podium, pass a bunch of people and make it stick at the end – its pretty sweet." 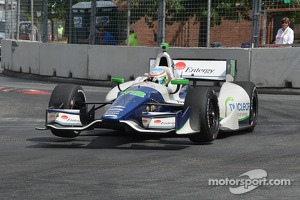 Another triumph performance was delivered by the only female pilot in the 24 car field. After qualifying P17, KV Racing Technology's Simona de Silvestro driving the #78 Nuclear Energy Areva Chevy managed to stay out of trouble and get past some pretty capable drivers, including the Indy 500 winner and team-mate Tony Kanaan finished at P5. "I'm definitely really happy with P5. It was kind of a crazy race. I don't think we had the fastest car out there, but we had a pretty good call on the pits when we got stuck in one of the wrecks. After that we were able to move forward and had some pretty good restarts. The Nuclear Clean Air Energy car was really good at the end, so I'm pretty happy with it for sure. Not a bad way to celebrate my birthday."

What really marked this race was the IZOD IndyCar Series championship fight and the held over controversy from the previous race at Sonoma Raceway about pitboxes and pitbox etiquette. Clear yellow paint and dotted 45 degree outer edge lines defined the smaller pitboxes all throughout pitlane. A new rule was added to the rule book that clarified the movements of pit workers during competition so as to make the racing safer for everyone.

All eyes were on Target Chip Ganassi Racing's Scott Dixon and Penske Racing's Will Power since Dixon had lost points in his effort to chase down Will Power's team-mate, Helio Castroneves, after having to serve a drive-through penalty during the GoPro Grand Prix of Sonoma for hitting a Penske Racing crew member working in Power's pit located just in front of Dixon. With the pitboxes being 2 feet shorter, and the pitbox locations being reversed - Dixon in front of Power, many thought there would be an opportunity for Power to possibly graze a crew member in Dixon's pit.

On the track, however, is where a miscue by Will Power ended both Dixon's chances at gaining championship points and Power's race.

On a race restart, Will Power was sizing up then race leader, Sebastien Bourdais, for a pass not aware that Scott Dixon had the same exact design on Power's car just in front of the #9 Target sponsored Honda Dallara. Dixon popped out to the right, next to the wall, then Power popped out to the right and touched Dixon's front wing sending both cars into the inside trackside wall ending their race and bringing out another of the six full course cautions of the race.

Scott Dixon started the race 38 points behind after gaining a point for capturing the Firestone Fast Six pole award, but lost another 11 points leaving him down 49 points with three races left. Disappointing after starting the #GPoB P1 just to finish P19.

As for the championship points leader, Helio Castroneves started his PPG Team Penske Chevy from a P7 qualifying position but lost many positions and had to adapt to a different pit strategy due to an early race black flag stop and go penalty for a safety violation. He slid his car in his pitbox and hit a crew member.

With Scott Dixon being forced out of the race after getting collected by Will Power, and Ryan Hunter-Reay suffering a power outage in his car - stalling on the track ... Castroneves was able to distanced himself from his top two competitors with a respectable P9 finish.

"Towards the end, I noticed that my main competitors were out," said Castroneves, who is seeking his first series title. “I know it could have been a bigger risk trying to finish further ahead. I felt that I had a target on my back. So I said, ‘I’m just going to take what I get,’ and that’s what I did. Sometimes it’s better to have only a few points instead of having a big accident and not even getting a point. So now we’re 49 ahead, and that’s what we’ve been doing the entire season."

In the end, the survivors came across the stripe after 75 hard fought laps with Frenchman Simon Pagenaud - #77 Schmidt Hamilton HP Motorsports Honda leading the final seven laps (Will Power led the most laps with 31) after aggressively passing Marco Andretti on a race restart to win his second race of the season and overtake Ryan Hunter-Reay for third in the championship points behind Dixon, Tennessean Josef Newgarden - #67 Sarah Fisher Hartman Racing Honda in P2 to notch his best finish in IndyCar as his brakes were fading, and Frenchman Sebastien Bourdais - #7 McAfee Dragon Racing Chevy in P3.

Favorite Tweet? ... Shane Rogers @upshifted - Random Stat: All 5 of the cars with the digit 7 in them, finished in the top 7. #indycar #GPoB.

The next scheduled events in the IZOD IndyCar Series 2013 championship season are a doubleheader weekend at the temporary road circuit near Reliant Stadium (home of the NFL Texans) in Houston on October 5 and 6 - similar to the two-race weekends in Detroit and Toronto this year, the Shell/Pennzoil Grand Prix of Houston could result in another wild, DW12 rubbing affair - and the season finale, MAVTV 500, is again at the superspeedway oval of Auto Club Speedway in Fontana, Calif., on Oct. 19.

Andretti has “thought about” quitting IndyCar if he wins Indy 500