A quick Q&A with French IndyCar driver Simon Pagenaud ahead of the 2014 season.

The metropolitan streets are deserted and dimly lit in the wee hours of the morning. Simon Pagenaud unlocks a warehouse door and opens an envelope that contains his classified mission: evaluate the 2015 Acura TLX prototype.

"It's real James Bond stuff," Pagenaud said of his role in a TV commercial he filmed in Los Angeles late last year.

The star is the car, but the IndyCar Series driver, who enters his third full season with Schmidt Peterson Motorsports is pleased with his supporting role.

"It was impressive to see how precise this industry is with lights and how the go about achieving what they want on the screen," said Pagenaud, who compared the prowess of the production crew to his race car crew. "It was exciting. I have a different respect for acting."

Catching up with Simon Pagenaud: 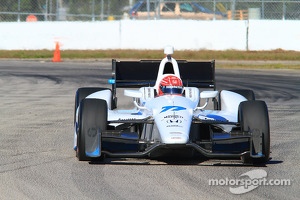 Q. So, did you get to drive the car as part of the commercial?

A. I did the driving backward in the alley, which wasn't easy because I'm not used to driving backward. There was a stunt driver who did a lot of the other stuff. I did a lot of the acting. I think the video was about two minutes and we spent 14 hours on the set. I had a great time with the Acura people. It was good to be involved in some new things, which is a testament to my relationship with Honda and I'm proud of it.

Q. Preseason test days are busy, working through many technical changes. Do you get to focus on your driving?

A. The twin turbo engine changes a lot of things so it's important to test with it and also tune it for everybody basically. It has a different behavior and it's important to that relationship with the HPD engineers and try to understand how to extract the best out of that engine and make the twin turbo work well. It'svery encouraging the work we've done so far.

(At Sebring last week) we're working mostly on drivability - making it more or less aggressive when you step on the power.

Q. To get that seat time, even in a different car like you did at the Rolex 24 At Daytona, is important?

A. I actually had 24 hours to work on my driving, to work on my skills, because you drive and there's nothing you can do to the car. I enjoyed driving the HPD Prototype. It was a great way to kick off the season and a good time.

Q. Will you follow up by competing in the 12 Hours of Sebring?

A. We'll be back in the car before the (IndyCar Series) Open Test the next day at Barber Motorsports Park. It will be interesting. We haven't done much testing yet, and there are a few things we want to improve on the race car to make it easier to drive and faster essentially.

Q. It's Year 3 with Schmidt Peterson Motorsports. How does that familiarity help you moving into the season?

A. I feel really comfortable in this role. I've proven what I can do already, although I want to extract more out of myself. The team is pushing really hard, and people don't see how much work my guys are putting in. I can tell you they're working hard at making this car a championship contender for this year. It's a veryexciting prospect. I'm relaxed and focused and happy to be starting soon.

Q. You'll have another rookie teammate this year, Mikhail Aleshin. How smoothly do you think will his transition be?

A. Mikhail is used to driving powerful cars and used to being in big teams so I think there will be a lot less adjustment for him, although he has to learn how to drive on ovals, which isn't easy, but he's taken a great approach. It won't be easy. There are so many challenges with IndyCar, so many details. He has a lot of talent and he's really smart, and I think he'll fit in well with us. He's already helping us with feedback.