© 2021 Motorsport Network. All rights reserved.
TV Tickets Fashion Giorgio Piola Jobs
Previous / IRL: Indy 500 - Why all bets are off Next / IRL: A. J. Foyt gets his own cereal box
IndyCar News

INDIANAPOLIS - Same drivers, same team, same sponsor, different - read bright - new colors. Team Kool Green is still exactly that, but will be wearing some new paint and graphics on its Reynard-Hondas as its longstanding sponsor, Brown & ...

Team Kool Green is still exactly that, but will be wearing some new paint and graphics on its Reynard-Hondas as its longstanding sponsor, Brown & Williamson Tobacco Corp., tries to breathe some marketing magic on its menthol-flavored cigarettes. 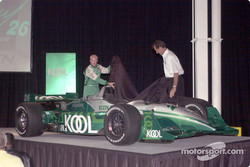 The wraps are off.
Photo by Greg Gage.

Beginning with the next round of the CART FedEx Championship at the Milwaukee Mile, TGK's teams will be showing their new colors. Paul Tracy will continue to carry the familiar bright green of Kool Filter Kings, but Dario Franchitti and crew will adopt a new blue-and-silver livery promoting Brown & Williamson's new Kool Milds brand.

"Our TKG partnership has seen a great deal of consistency," Cremers said. "But there are significant changes focusing on our Kool brands." 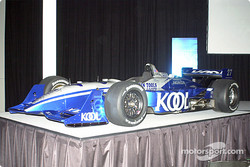 The announcement was made Friday at TGK's headquarters in Indianapolis.

TKG founder and CEO Barry Green saluted Brown & Williamson for supporting his team since 1997, expanding its involvement to two-car sponsorship the following year.

"Over the years, while there have been some changes to the team, Brown & Williamson has been our partner with great consistency," Green said.

"Now he (Franchitti) won't have to worry about being mistaken for me by CART officials ever again."

Franchitti and Tracy finished seventh and 14th, respectively, in last year's CART FedEx Championship. They will start side-by-side in 28th and 29th spots in Sunday's Indianapolis 500. TKG is mounting a three-car effort at the Indy Racing League's signature event with a Motorola/Archipelago-backed entry for Michael Andretti gridded 25th.

IRL: A. J. Foyt gets his own cereal box