Anne Proffit examines why Conor Daly can't get a ride in America.

It was with a good amount of dismay that I read the news that Conor Daly, an accomplished racer in GP3, Indy Lights and at last year’s Indianapolis 500 is putting his emphasis on GP2 as he attempts to make his way to Formula One. Why dismay? Here’s a guy who’s been to every single Verizon IndyCar Series race last year and this, looking for a way into an Indy car. He stated he wanted to remain in the series, but like so many other young, deserving drivers, Conor Daly doesn’t have the funding to race at home. He does, however, have backing that will take him back to the European theater in 2014.

That’s quite a shame to me. I’ve watched Conor race since he was a wee tyke and it’s evident he’s got plenty of talent. What he doesn’t have is money. Sure, you’d think his father would help and I’m sure Derek has assisted Conor through to this point, but he has his own life to lead. Same with his mom Beth. Conor’s an adult now and has to stand on his own two feet without parental support.

He’s pounded the pavement here in the USA looking for work but has been met with stony stares. True, he wrecked one of AJ Foyt’s cars last year at the Brickyard in practice for the 97th Indianapolis 500, but name me one driver that hasn’t hit the wall at Indy? Other than that, Daly’s on-track demeanour has been excellent all around and he’s able to hold his own exceptionally well off the racetrack. He’s a personable young man. So what’s the problem, I wonder? 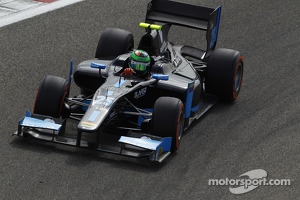 At any rate, Conor Daly has made a commitment to race for Venezuela GP Lazarus in the 2014 GP2 campaign, after completing pre-season testing and finishing 12th in the first of two races at Bahrain; he had a gearbox issue in the second race.

Daly confirmed that this has been “a long winter of uncertainty for me, and we will still have some funding gaps to close” as he works toward this full-time gig in GP2. Now that doors have closed for him at home, “I am committed on my path to Formula One. GP2 is where I want to be right now and the Lazarus team really has a great group of people.”

The Italian team Conor Daly is racing with began its own journey two years ago, formed in 2012 to compete in GP2. Venezuela GP Lazarus just added Luigi Mazzola, ex-Ferrari engineer who’s worked the past 20 years with such luminaries as Michael Schumacher, Alain Prost, Kimi Raikkonen and Felipe Massa. The team was initially impressed by Daly’s talents when he tested for them in 2013 at Malaysia. “He was immediately able to provide valuable feedback that has helped us develop our cars more quickly,” noted Tancredi Pagiaro, team principal.

It seems this Italian has more affinity for what we need in the USA than we do when he confirmed: “America needs a Formula One driver and why should not a good Italian team be able to develop one?” Pagiaro asked.

I’m just perplexed it’s not someone like Chip Ganassi, Roger Penske, Michael Andretti, Kevin Kalkhoven, Jimmy Vasser or even Dale Coyne making statements about preparing Conor Daly for success in the Verizon IndyCar Series and the upcoming Indianapolis 500. He tried to get work here at home first and went back to European-based GP2 when American doors closed for him. And that’s a damn shame.

Al Unser Jr. to serve as driver coach for KV Racing Technology in month of May