The cross-continent, multi-series schedule was Mike Conway's choice because he enjoys nothing more than the pursuit of victory no matter the series or racetrack.

Mike Conway is a part-time Verizon IndyCar Series driver with a full-time schedule of racing and though he'd like nothing more than to bask in glow of a victory in the 40th Toyota Grand Prix of Long Beach with Ed Carpenter Racing this week, he's off for more racing.

The 30-year-old Brit will head to Silverstone in England to compete in one of his other part-time gigs -- A six-hour sports car race for Millennium Racing this weekend -- before jetting back to the States for the April 25-27 Honda Indy Grand Prix of Alabama.

The cross-continent, multi-series schedule was Conway's choice because he enjoys nothing more than the pursuit of victory no matter the series or racetrack. After leaving A.J. Foyt Racing with one race remaining in the 2012 season - by his choice - Conway coaxed five top-10 finishes, including a victory and third place at Detroit, out of seven starts in 2013 with Rahal Letterman Lanigan Racing and Dale Coyne Racing. 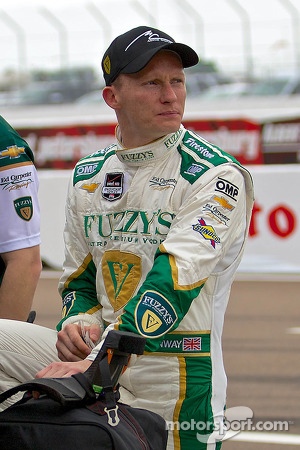 Carpenter, the sole Verizon IndyCar Series team owner/driver, stepped up to hire Conway for this season as he stepped out of the No. 20 Fuzzy's Ultra Premium Vodka car for his own part-time schedule of ovals and to concentrate on solidifying the business side of the 3-year-old team.

Conway placed 16th in the season opener on the streets of St. Petersburg, Fla., and starting 17th for the 80-lap race on the 1.968-mile, 11-turn Long Beach street course didn't do much to raise his confidence. But as he's experienced through his career that began in British Formula Ford, if you're not challenging you're not really driving.

Conway inherited the lead when reigning Verizon IndyCar Series champion Scott Dixon had to pit for a splash of fuel on Lap 78, and he held off Will Power and rookie Carlos Munoz to win by less than a second.

"It says a lot for the ECR crew that I was able to win in my second race with them," Conway said. "Of course, I just love this circuit as well as the overall event. It's a classic and I just can't believe I have now won it twice in the last four years. We did get some breaks in the race as a driver usually does when he wins."

Conway's charge to the front late in the race was similar to his 2011 Long Beach performance as he took advantage of others' mistakes and misfortune along with displaying solid race craft.

"When I won in 2011, I had to come back from 20th in the middle of the race to get up to the leaders," he said. "So I knew that starting 17th it was possible to challenge to get up front. But we had a game plan with our Firestone tires to use the black tires (primary and hard) first and then follow up with two sets of red (softer) sticker tires during our pit stops. The car felt good with the red tires for our final two stints."

Carpenter, who will test in the No. 20 Chevrolet-powered car this week at Texas Motor Speedway before beginning practice May 11 for the Indianapolis 500, sees the race as a statement for the remainder of the 18-race season. Also, the victory came 35 years to the weekend that Fuzzy Zoeller (founder of primary sponsor Fuzzy's Ultra Premium Vodka) won the Masters.

"I have never won a race this early in the season," said Carpenter, who gave the team its first victory in the 2012 season finale at Auto Club Speedway about 50 miles northeast of Long Beach. "So this is very exciting to show that our decision paid off pretty quickly.

"We have made some solid gains with Mike already and this victory will give the team more confidence to cement our beliefs that we can we can win additional races."

Conway will do his part to help claim the entrant championship.

"I've got to say a big thanks to Ed for making it happen, and all the guys at Fuzzy's Racing to put me in this position," he said. "I think it's a great combination. It's great to repay them this soon with a win. I think Ed's going to be awesome on the ovals, so it's great to be part of it."

IndyCar: Askew to sub for injured VeeKay at Road America

More from
Will Power
Video Inside
IMSA

Ferrucci returns to Detroit, where he made his IndyCar debut