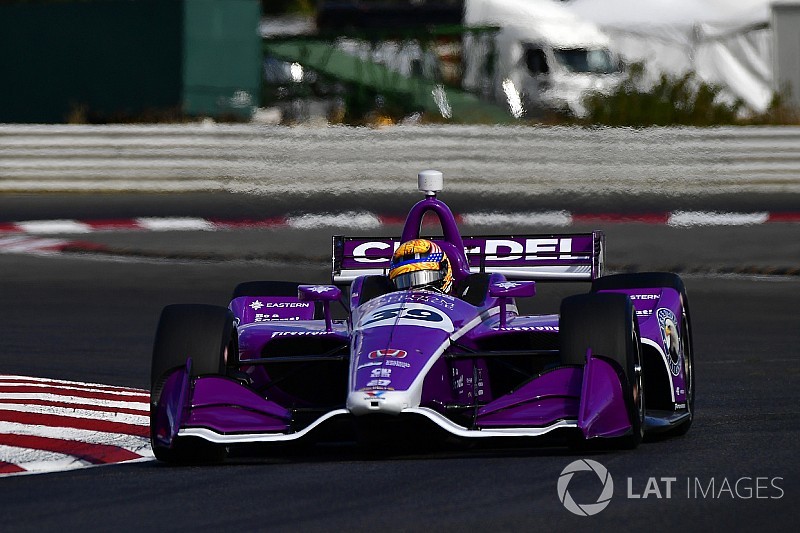 Dale Coyne says he’s so far been impressed with Santino Ferrucci in terms of performance, work with his engineer and behavior within the team, despite the ex-Formula 2 driver's mixed reputation.

Connecticut-born Ferrucci earlier this year lost his ride with the Trident F2 team, and he’s perceived as a controversial choice for Coyne to run in a third car this weekend at Portland International Raceway and in two weeks at Sonoma Raceway.

Ferrucci, who was handed a four-race ban for deliberately crashing into his teammate Arjun Maini at Silverstone, however has retained his place as a junior driver for the Haas F1 team.

For his part, Coyne, who also ran Ferrucci in place of the injured Pietro Fittipaldi in the Detroit races this year, told Motorsport.com he’s encountered no difficulties with the 20-year-old and praised his pace and feedback.

Ferrucci finished the second practice in third place, although several drivers said they had failed to set representative times on the alternate softer Firestones due to red flags and consequent traffic.

Said Coyne: “We weren’t there to witness all the things that went on in other formulas so we can’t judge fairly. We’ve read the same things you’ve probably read on the internet, but anything can be said on the internet – as we keep seeing on all sorts of topics these days.

“All I can say is that Santino hasn’t been that way around us at all. Not Detroit, not here, and not in the other races in between where he’s visited and interacted with us. You know, look at Haas – they didn’t throw him into the weeds, and nor will we.”

Coyne said he’s been impressed with Ferrucci’s ability to adapt to IndyCars, especially as he’s chosen to go in a very different setup direction than de facto team leader Sebastien Bourdais this weekend.

“In Detroit he finished one position behind Sebastien, in the second he was three spots in front,” observed Coyne. “He made mistakes in the race, but whenever he’s in the car, he’s quick. Maybe this will lead to more races next year.

“He’s listening to Sebastien, but he drives the car very differently, so his setup has gone in a different direction. He doesn’t like understeer like Sebastien does; he’s got recent kart experience so he throws it in hard, and deals with the rear.

“He’s working with Rob Ridgely [who frequently race engineers Coyne’s extra cars for the Indy 500] and they get along good. Rob filled in for Michael [Cannon] on the #19 car at Texas when Michael was sick, and he got to know Santino a little bit back then. They work well together.”

Asked if Ferrucci was someone he’d consider partnering Bourdais in 2019, if Fittipaldi were not available, Coyne replied, ‘Yeah, I think so. He’s doing a nice job. But we’re still looking at all of our options for next year.”

This weekend marks the first time since 1999 that Coyne has entered three cars into any race outside of the Indy 500. On the possibility of running three cars full time in 2019, Coyne said: “I don’t think so… but let’s see.”