Coyne eager to retain Ferrucci after another star performance 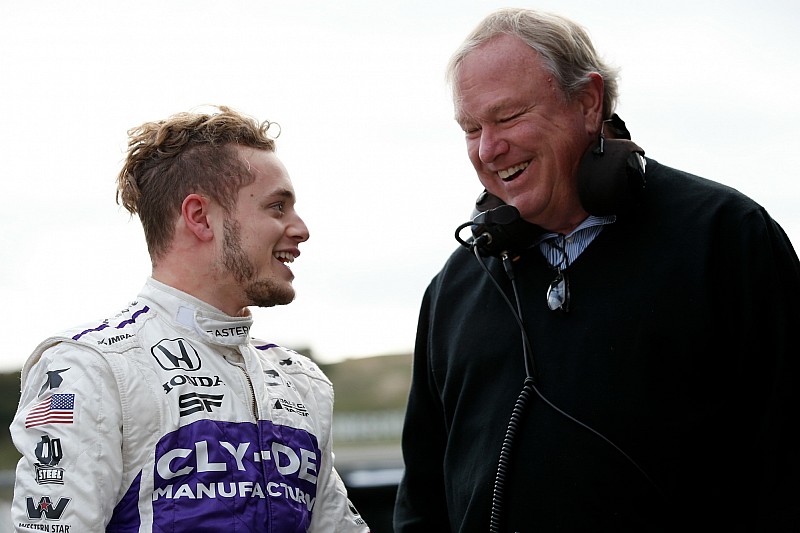 Both team owner Dale Coyne and race engineer Michael Cannon are determined to keep star IndyCar rookie Santino Ferrucci in the squad for 2020 after the young American drove another outstanding race on an oval on which he had no previous experience.

The #19 Dale Coyne Racing-Honda driver qualified sixth, led far more laps than anyone else (97), made several brave passes and appeared to have the measure of all his opposition, including his veteran teammate Sebastien Bourdais who, like Power, got into the marbles and struck the wall soon after a pitstop.

Ironically that Bourdais-caused caution period was to prove Ferrucci’s undoing as it allowed Takuma Sato, Tony Kanaan and Ed Carpenter to pit under yellow without losing their positions at the head of the field. A superfast pitstop from Team Penske for Josef Newgarden under caution and Alexander Rossi not stopping left Ferrucci in sixth at the restart on Lap 205 of the 248-lap race. He deposed of the fuel-saving Rossi on Lap 210, and then closed in on championship leader Newgarden, who put up a determined defense until Ferrucci got through on Lap 235.

After a couple of failed attempts to go around the outside of Carpenter, Ferrucci drifted high and allowed Newgarden back through on Lap 241, but repassed him on Lap 246.

Another wild moment on the final lap saw Ferrucci recover but attract the ire of Newgarden when he came down on the racing line at the final turn, causing the Penske pilot to spin. The DCR driver nevertheless claimed another fourth place, moved to ninth in the overall championship and took the lead of the Rookie of the Year standings.

“I had so much fun leading this race,” said Ferrucci. “Having open air like that and being able to run to a pace, run your lines and not have to think about it and just enjoy it.

“But hats off to our crew. We had a winning racecar. It’s just a little bit unfortunate that we got caught by the yellow.

“Then at the end, I was racing so hard to get back into the top three. I was really trying to bring home some hardware for the boys. Unfortunately, not everything went our way but I’m happy we came home in fourth.”

Although Coyne was left disappointed to not even salvage a podium on a night when his cars had been legitimately running 1-2, he said Ferrucci’s performance was further evidence of why DCR’s current team and driver combo works.

“I’ve been really impressed,” he told Motorsport.com. “Not just Santino but everyone on the team – the crew, the engineers. And Santino just drives it; no major changes, no complaints. Keeps it simple.”

Asked what’s helped Ferrucci adapt so well to ovals, with fourth places at two tracks on which he hadn’t even tested, Coyne replied, “Well, he’s brave, not intimidated by anything, knows how to pedal it and catch it when he goes too far. And he’s learning how to use the tools in the cockpit if he wants to make handling changes on the move.

“He also listens to us in the truck and on the radio. He trusts the setups that Michael [Cannon], Olivier [Boisson] and Craig [Hampson, Bourdais’ race engineer] come up with; he knows they have a lot of experience and what they’re saying is going to work. He’s been very open-minded about learning on the job.”

That being the case, Coyne is loathe to break up the squad for 2020.

“We’ve had a lot of calls from drivers interested in joining us – a lot. And that says something for the way the series is going, too, as well as showing that our team is a good one, very solid. But I think we’ve got something really good going with Santino and we don’t like change for the sake of it.

“I think we’ve helped make him the IndyCar driver that he is, and I think he’s getting the most out of the car we give him. So yeah, I think we should stay together. If you’re making the kind of progress we’ve seen from him and from us, you’d be taking a big risk to go separate ways, right? Honestly, I think he’d be a fool to go anywhere else.”

Cannon, like Ferrucci and Coyne, was frustrated to finish off the podium, but was thrilled with the performance. “A driver and car combination that quick should not have finished fourth,” he shrugged. “He should be on the podium getting a bit of tin. But it is what it is; all the fast driver/car combinations have that kind of thing happen to them at some point in a season, where other cars on a different cycle get lucky with the yellows.”

Although Ferrucci had a slow final stop that left him behind Bourdais, both Coyne and Cannon believe the rookie would have passed the veteran even if the #18 car hadn’t crashed out.

“We had a little bobble in our final pitstop that put us behind Sebastien,” said Cannon, “but that didn’t have a bearing on the result. I think we were well capable of recovering from it at the end of the day. It was the other three cars benefiting from Sebastien’s shunt that gave us too many cars to try and pass in the time available, especially given the tire life and the amount of marbles on the track.”

Cannon also sympathized with colleague Hampson, who last won a race with Bourdais in the 2018 season-opener.

“I feel so sorry for Craig,” said Cannon. “He works so freaking hard and puts so much effort in. He never rests. He was looking at earning either a win or at least a second place with Sebastien and obviously he’s a key part of what myself and Olivier do with the #19 car. We’re a true team. So to see a potential 1-2 finish fall apart like that is a double blow.”

Sato thanks fans, RLLR, media for support after “special” win