Daly excited by pressure of “best shot ever” at Indy glory

Conor Daly says that racing an Andretti Autosport-Honda in May’s Indianapolis 500 will offer him his best chance of victory, but that he can handle the pressure of expectation. 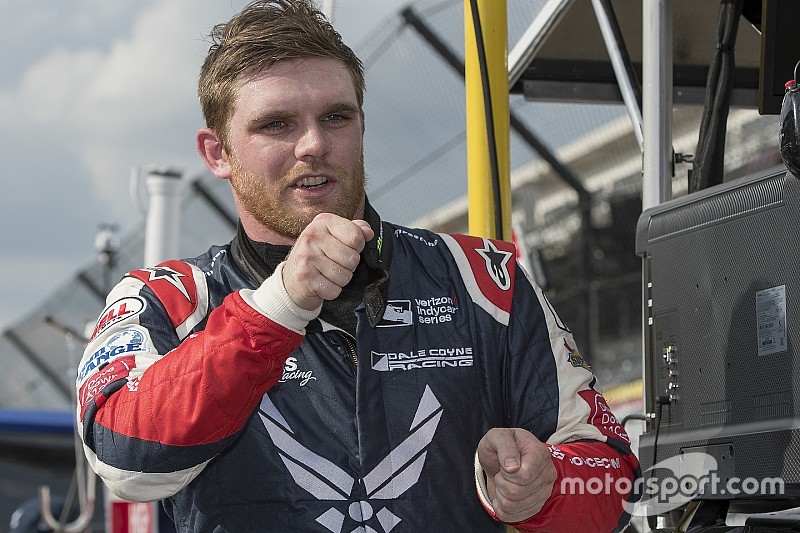 Andretti Autosport has won three of the last five 500s and even its one-off entries, as demonstrated by Townsend Bell, Carlos Munoz and Fernando Alonso, traditionally run at the front of the pack.

Following this morning’s announcement that for a second year the U.S. Air Force will sponsor Daly at Indy, but this time at Andretti Autosport rather than Dale Coyne Racing, Daly told the media that while he acknowledges AA’s record of success at IMS, he’s aiming to turn that pressure into excitement.

“It's a fantastic opportunity,” said Daly. “No one doubts the fact that Andretti has had so much success at the track, at the event, the whole series in general. I have two Indy 500 champions as teammates [Ryan Hunter-Reay and Alexander Rossi], just an incredible wealth of experience. It's going to be awesome, certainly my best shot at the race ever.

“There's added pressure that I put on myself. But realistically the goals never change. As long as you show up as a driver and do everything you can possibly do, you can be happy with your performance. I think we know that the level of equipment will be great. We know that the team will be assembled really strongly.

“There's always going to be pressure. I've always had pressure on me to do something… [but] I'd rather turn pressure into excitement, to get to work, because I think it will be an environment that will be definitely new to me in a very good way.”

Asked what he learned from his five previous experiences in the Memorial Day Weekend classic, he replied, “I think for sure a lot of maturity.

“I remember in 2016 [two-time Indy winner] Montoya came up to me [and said], ‘Man, you're really fast, just be a little more patient.’ That's what my dad was preaching to me as well.

“That's something I think I've learned since then. 2016 is the year we had a really good car. We got caught up in something, it was a shame. I think we could have shown a lot better than what we did. But since then, it has been a struggle.”

Since his Indy 500 run in the Coyne with Thom Burns Racing entry last May, Daly has raced a NASCAR Xfinity car at Road America, and also for the Harding Racing team in three other IndyCar races. These ‘last-minute’ or unexpected deals, he says, are keys to his confidence that he can give his best in May.

“Every time I've been able to get into an IndyCar, I feel ready to be able to deliver, no matter what the level of equipment is,” he mused. “I'm excited to see the high end of the spectrum. We know it will be a good situation. I can't wait to see what it feels like.

“Over the last 18 months, since the end the 2017 season, I've been in a couple different cars, a couple different situations. I've always been sort of thrust into the deep end, I've had to try and just do whatever I could do in a last-minute type situation. I'm used to that.

“But the Indy 500 is a little bit different. Last year we missed the first day of practice. It was definitely a bit of a hectic situation. Showing up to Indy now with probably a lot of information already that we've been able to study. I'm going to try and be at every race with the team to see how it all works.

“I think this sort of situation, I'll feel more comfortable in. I've matured as a driver I think now, and I feel ready to just take advantage of each day one day at a time. We're not going to win the race in the first three days, we know that, not even in qualifying.

“I think it will just be a great situation for my brain, really. Last year, heck, I was just trying to survive, make the race, take all the wing out we possibly could to see what happened. I think it will be a different situation this year.”

Carpenter would choose Daly over one of the F1 exiles