Kanaan ran out of fuel on lap 51 just as he was scheduled to make a pit stop and De Silvestro, despite passing several cars on her final stint, finished 8th. 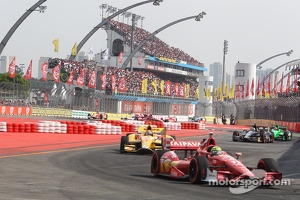 Kanaan quickly moved up through the field leading a total of 12 laps and looked poised for his first podium finish of the season, while De Silvestro did a great job maintaining a top-ten position while conserving fuel for a late-race push that the team hoped would also take her to the podium.

Unfortunately, things didn't work as planned. Kanaan ran out of fuel on lap 51 just as he was scheduled to make a pit stop and De Silvestro, despite passing several cars on her final stint, finished 8th as the yellows didn't work in her favor.

De Silvestro ran a solid race, but felt she had the potential to finish higher. "I think it was a really good race," she said. "We had to save fuel on the strategy we ran and with the yellows we got stuck behind slower traffic. The last stint we could go hard and we passed a lot of cars.

That was a lot of fun. I wish the whole race would have been like that. I think it was good, but I think it would have been better if we had come in and got some more fuel to run harder. The car was on rails on blacks and on reds, so that was a lot of fun. It was a pretty good ending even though I think we had a chance to finish a little higher. I'm happy with my second straight top-ten finish."

Having a miscalculation and always having difficulty finding telemetry at this track, the two combined together resulted in us running out of fuel on track. Obviously it was very disappointing for Tony in front of his home crowd."

Kanaan chose to look on the positive side of the day. "It's hard to find some words to explain the whole situation," he said, "but I must say that we won and lost together. We don't know what exactly happen, but we're looking at this in a positive way; we had the opportunity to win and were competitive throughout the weekend.

I would love to win in my hometown and I have to thank everyone for the kindness I received during the race; it was something indescribable. For sure we know that are going strong to the Indianapolis 500".

Jimmy Vasser, team co-owner, was extremely disappointed for Kanaan and his sponsors and is looking into the cause of the No. 11's fuel issue. "Very, very disappointing for Tony Kanaan in his home Grand Prix while representing the race sponsor Itaipava," Vasser said. "I think the fans had a good show; they knew we were here.

What happened on our fuel calculations...we ran the car out of fuel, there's no doubt about that. But, our alarms didn't go off and our numbers showed that we should have had a gallon in the car at that time.

I've called for a full detailed report of the sequence of events that led to the car running out of fuel. Until I have that from the team when we get back I can't speculate on exactly where the problem happened. But, all-in-all I think they knew we were here.

Vasser goes on to say, "Simona had good pace all weekend; maybe not the race she would like to have had with the way the strategy played out. But, we put it behind us and we go to the biggest event of the year, the Indianapolis 500. I think we're well prepared for that and I'm just looking forward to getting on to the next one."

The team heads back to Indy tonight to regroup and finish preparations for the Indianapolis 500. The Greatest Spectacle in Racing airs live on ABC Sunday, May 26th at 11:00 a.m. ET.