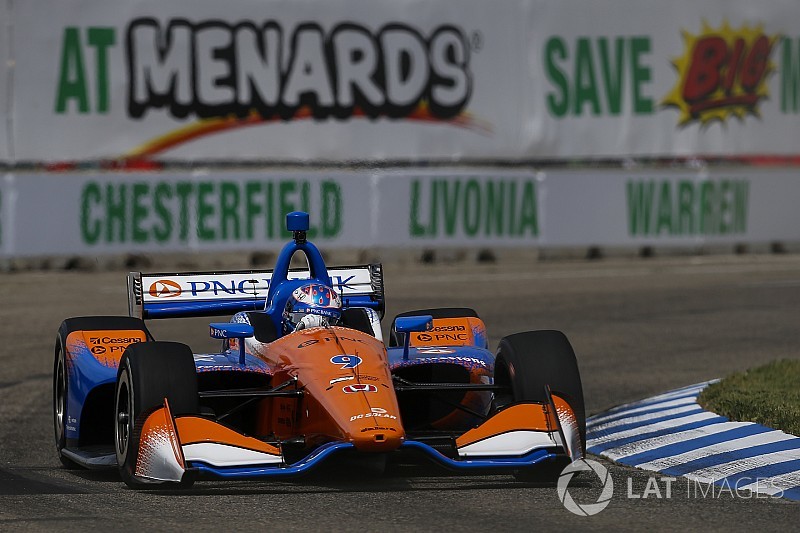 Will Power’s Penske-Chevrolet lost out to the two Rahal Letterman Lanigan Racing-Hondas of Takuma Sato and Graham Rahal (the only driver to start on blacks) while James Hinchcliffe (SPM) and Spencer Pigot (Ed Carpenter Racing-Chevy) completed the top 10.

Behind them, Ed Jones in the second Ganassi car ran ahead of Josef Newgarden in the second Penske-Chevrolet, Tony Kanaan’s AJ Foyt Racing-Chevrolet and Simon Pagenaud (Penske).

Newgarden pitted on Lap 6, and Hinchcliffe stopped a lap later – then received a drive-through penalty for an improper release. Andretti Autosport saw Rossi move forward into third ahead of Wickens but Hunter-Reay drop back to sixth behind Sato. Wickens then pulled into the pits for his first stop, as did Kanaan. On lap 9, it was Hunter-Reay’s turn to pit.

Andretti, couldn’t get away from Dixon and Rossi – and swiftly catching them was Rahal who passed teammate Sato for what was now fourth on Lap 13. Power, in sixth, had fallen 11sec behind the leader, his lap times suggesting a two-stop strategy, but set his fastest lap on Lap 18, as teammate Pagenaud stopped from ninth place.

Sato was next of the Top 10 to blink, stopping on Lap 20, with Rossi finally releasing an impatient Rahal by stopping on Lap 22. Andretti and Power went a lap longer before making their change onto blacks, with Dixon stopping on 24 having led a lap for the first time this year.

Rahal went just one lap longer and that handed the lead to Hunter-Reay, with Dixon third having easily jumped Andretti with a stop almost two seconds longer.

The three-stopping Newgarden pitted again on Lap 26, as Hunter-Reay tried to stretch away from Dixon, who, despite running black tires, was able to keep the red-tired Rahal at bay.

Rossi passed Wickens, persuading SPM to call the Canadian to the pits, and Kanaan followed the same tactics. Hunter-Reay ducked out of the lead at the end of Lap 32, leaving Dixon leading Rahal by 5.5sec. Hunter-Reay emerged in third right ahead of teammates Andretti and Rossi. He’d quickly leave them behind.

Up front, Dixon kept pulling away, on Lap 36 setting a time of 1min15.8sec to go almost 10sec clear of Rahal; by Lap 40 that lead was 13sec. Even more disturbing for Rahal was that Hunter-Reay was right in his slipstream a lap later.

When Rene Binder dropped his Juncos Racing-Chevy down the Turn 7 runoff, Dixon, Rahal, ducked into the pits, and soon everyone else had done the same. The Binder situation might have been resolved under a local yellow, but suddenly there was a full course caution – Rahal had clipped the curb at Turn 13 and it had launched him hard into the outside retaining wall.

So Dixon retained his lead but now had a crocodile of cars behind, chased by Hunter-Reay, Andretti, Rossi, Jones, Sato, Power, Newgarden, Pigot and Wickens filling the Top 10 as they took the restart beginning Lap 54, with 16 laps left.

Sato immediately got around Jones, and Power too considered the pass going into Turn 3. Jones attempted to repass the following lap, but Sato held him off. The top four, meanwhile, had broken away, and Hunter-Reay appeared to be struggling to hold off a feisty Andretti, and Jones was having to watch his mirrors as Power and Newgarden were right there.

On Lap 57, battling for 14th, Kimball dropkicked IndyCar debutant Santino Ferrucci into the tires at Turn 7 – a rather shocking end to his first race in the #19 Dale Coyne Racing-Honda.

The restart with eight to go saw Hunter-Reay having to defend heavily from Andretti in Turn 1, but then Andretti had to defend hard from Rossi passing around the outside of Turn 3. He failed and Rossi moved into a podium position.

Two laps later, Wickens got around Newgarden into eighth and moved onto Power’s tail.

Despite Hunter-Reay staying within 1sec, Dixon held on to score his first win since Road America last July, the 42nd of his career (matching Michael Andretti for third in the all-time winner list). It also moved him into second in the championship standings, ahead of Indy 500 winner Power.

Power did his best to grab sixth from Jones, but the Ganassi driver had more push-to-pass boost left, and that helped keep him a second away, having let the gap fall to half a second. Power in seventh was thus Chevrolet's highest representative.

Wickens, who’d fallen away from Power to the tune of 5sec, had to work hard over the final couple of laps to stay ahead of Newgarden, who was also watching his mirrors for Pigot, while Hinchcliffe finished a rather anonymous 11th following his penalty.