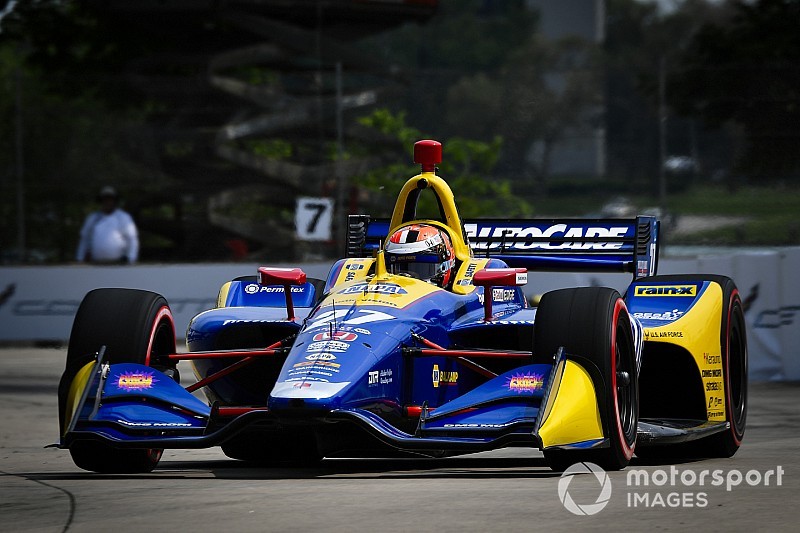 Alexander Rossi produced a brilliantly acrobatic lap to nail his sixth NTT IndyCar Series pole in Detroit, beating Scott Dixon by 0.2sec in Group 2, while Josef Newgarden led the first group and will start on the outside of the front row.

Worries over the durability of the Firestone alternates kept the drivers on primaries for the majority of the 12-minute Group 1 session, with Team Penske-Chevrolet’s Will Power setting the fastest time on the primaries.

However, the Chip Ganassi Racing-Honda of Felix Rosenqvist was the first car to nail a time on the alternates and went 0.45sec faster than Power’s benchmark time.

Power then blew his first attempt on the reds by skating down the Turn 7 escape road, and then got a bad exit off the penultimate turn on his second flyer, improving only marginally on his primary-tired run.

Thus teammate Newgarden topped Group 1 with a 1min14.8272sec ahead of Rosenqvist, Ryan Hunter-Reay and Zach Veach of Andretti Autosport and James Hinchcliffe in the #5 Arrow Schmidt Peterson Motorsports-Honda.

Power was only sixth, therefore consigned to 12th when the qualifying groups were combined.

In Group 2, Dixon got within 0.1sec of Newgarden’s alternate tire using the primaries. Dixon’s first flyer on the reds produced a 1min14.5838sec to guarantee this group would produce the pole-winner but Rossi laid down a stunning 1min14.1989sec.

Dixon, having let his tires cool for a lap, tried to respond but grazed a wall and fell 0.2sec short, so will line up third for this afternoon’s race.

Colton Herta will start fifth for Harding Steinbrenner Racing after turning the third fastest time in Group 2 despite being called back to pits for a pitlane speed violation. His former Indy Lights rival Patricio O’Ward was fourth quickest in group and seventh on the grid for Carlin-Chevy.

Indy 500 winner Simon Pagenaud had a disappointing session, 1.2568sec off Rossi’s top time, and will start on the row behind teammate Power.

Leaders of each group get a point, so Newgarden has drawn level with Pagenaud in the championship, at least until this afternoon’s race starts at 3.50pm ET.