Dixon clung on to score his sixth NTT IndyCar Series victory at the Lexington, OH circuit by less than a tenth of a second from Rosenqvist, struggling to make his alternate red tires last in the final stint after opting for a two-stop strategy.

The five-time series champion pitted for the second time on lap 59 on 90, and after three-stopping Rosenqvist made his final stop on lap 66, Dixon led by nearly 10 seconds before the Swedish rookie began to reel in his more experienced teammate.

Dixon believes that he would have had a straightforward run to victory had he chosen the harder black tires, and not reds, for his last stint.

"With about 15 [laps] to go, I started moaning to the team," recalled Dixon. "I'm like, ‘Man, I think we're going to have to pit again.’ A lot of it, I think, was just bad choices from my front.

"I think after the race, Chip [Ganassi] said that he had decided that we should have gone to blacks. But I said, it looks like the reds are holding on pretty well, but we made adjustments to the first set of sticker reds, had quite a bit of understeer.

"We made those changes for the used second set that already had four laps on it from qualifying, and they just couldn't take it. It was too aggressive.

"Luckily I used them early to try and get past some of those lap traffic cars that did help us later on, I think at least delay Felix getting to us. But ultimately had we gone to the black tires, we would have maintained our eight- or 10-second gap."

Dixon and Rosenqvist made contact on the final lap of the race as the latter tried to make a move up the inside of the Turn 2 right-hander, only for the former to close the door.

"I knew he was going to come in deep there," said Dixon of Rosenqvist's passing attempt. "I thought he was actually going to just wait to get a good exit off of [Turn] 2, and ultimately I think had he just been a little bit more patient there, I think he would have got me probably going into 4.

"But because that kind of messed up his momentum and kind of got him into dirty stuff a little bit, it took him a little time to react after that one. It worked out perfectly for us.

"Again, I think it was just bad choices on my front that put us in that situation, though."

Dixon added however that, despite the contact, he wasn't concerned that his teammate would attempt anything reckless to score a first IndyCar win.

"I think there's a big understanding in any team that the last thing you want to do is take each other out," said Dixon. "And Felix is a rookie here in IndyCar but has raced in many different series and has much broader knowledge of racing than I even do because he's touched so many different kind of formulas.

"Again, I keep saying it, but he's a big talent. He's going to win a lot of races. He was super-fast all weekend." 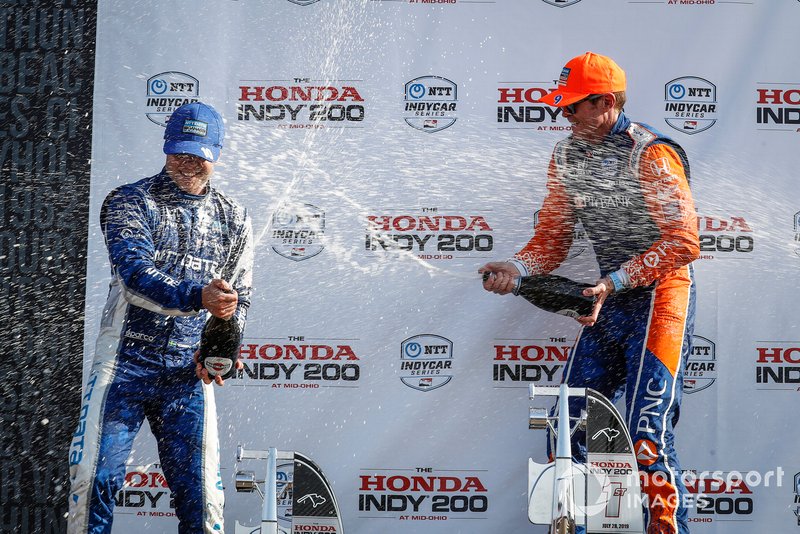