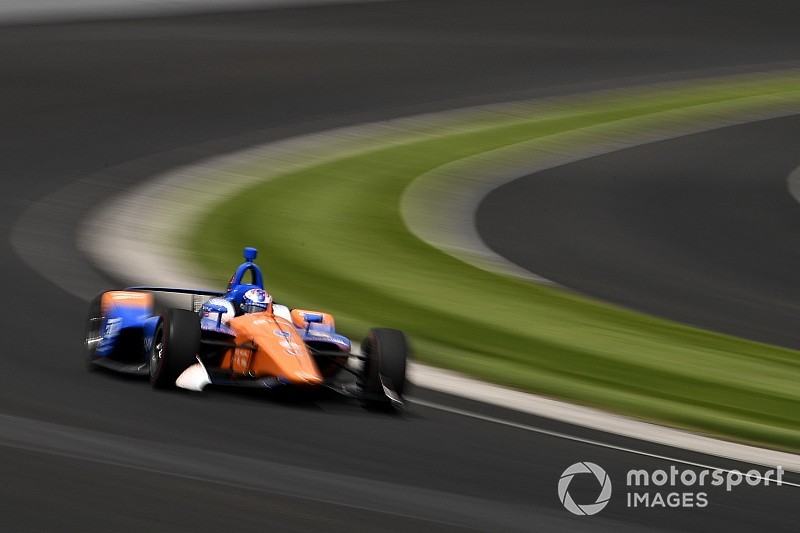 Five-time IndyCar champion and 2008 Indy 500 winner Scott Dixon is expecting a tough fight to reach the front of this year’s Memorial Day Weekend classic, especially if it’s a “straight-up dogfight”, but approves of how difficult the current car is to drive.

The Chip Ganassi Racing-Honda legend, who is third on the all-time Indy car race-winner list behind only AJ Foyt and Mario Andretti, will start only 18th on the grid for the 103rd Running of the Indianapolis 500 presented by Gainbridge, but he is aiming to be in the leading pack long before half-distance.

“We need to move forward fairly quickly; you don’t want to be leaving it until halfway through the race,” he commented. “You want to be up there within the first two or three stints.

“The downside is if you’re starting in a place you don’t want to be. Mistakes can be made easily, it can get three- or four-wide. So hopefully we can move forward. The car seems to be good on long runs.”

Although IndyCar revised the front wings for this year, and gave teams more options with aero pieces, Dixon is expecting the cars to remain difficult to drive as per last year’s race, the first race with the superspeedway iteration of the current universal aerokit – but says he doesn’t have a problem with that.

He said: “With the universal aerokit, the wings are more like trim tabs as opposed to [adjustments for] downforce levels. Everyone is locked into a similar area now. This year they added some aerodynamic pieces but as you can see, most of the teams picked similar things anyway. There’s just less room to have differences between cars.

“But I thought last year was a great race for the sheer fact that you saw the best driver in the best car win. Some of those years when pack racing was happening, it was basically just about whoever could take the biggest risk would have the advantage. I prefer to see someone like Will [Power] drive his arse off and get a victory that he deserved.”

A little later, Dixon commented: “It’s been interesting to hear people complain about how bad their cars are in traffic because I thought this year was a lot better than last year. I think for us, typically, we hope it’s going to be a hot race because it does magnify the car’s issues more… You will get a clearer view of if a car is good or bad.”

The current weather forecast for Sunday is not looking promising – at the very least, locals and experts (and local experts) are expecting the 103rd Running to be broken up by rain, even if it is completed in one day. However, given the vagaries of Indiana weather, and the fact that it can be raining in Indianapolis and clear over the iconic Speedway – or vice-versa – Dixon said that he’s trying to eliminate that worry from his mind. And, as he points out, there is no telling how Race Control may react, since the race can be called as final at any point past the halfway mark or, if the weather forecast looks more promising later on in the day, it can be restarted once the track is dry.

“Last year I think we were supposed to get rain all day and it never rained,” Dixon shrugged. “[Being a weather forecaster] is the only job where you can be wrong every day and still keep the job! Maybe it’s a good plan for me for my next job…

“You can’t focus on that. We have people on the team who will focus on that stuff but there’s no point for me. They’ll tell me if they think [bad weather] is coming.

“But then again, you don’t know how Race Control is going to call it either. We could get halfway and then sit around for three hours, dry the track and then go and finish the race. It’s daylight until 8 or 9 o’clock here. I’ve been in races like that where you’ve had a three-hour delay and you get back out there and you start racing again. You can’t dwell on that too much.”

There is much debate over how much progress Honda has made relative to Chevrolet on superspeedways in terms of outright power, given that again Chevy dominated qualifying, and the engine manufacturers were granted very few areas in which to modify their 2.2-liter V6 twin-turbos last winter. Honda’s strength has been in using less fuel – key in Alexander Rossi’s victory at Pocono last year – and Dixon suggested that may well be one of the keys to his hopes on raceday.

“It comes down to that always awkward stint and a half when there’s a caution and people go that way [waves arms in opposing directions],” he told Motorsport.com. “Last year we saw that. And we kind of did a bit of both, and I don’t know how but it kinda paid off in the end! We were sixth or seventh all day and we ended up third.

“I don’t think there’s a big enough difference on the fuel side, or the performance side, but it’s tough because we’ve seen it for a while now, that the engines are so mature now, there’s no easy fix. We’re seven years on one [engine] architecture…

“There are obvious ways to approach the race differently, to do it differently, and that’s what we’ve got to do. We’ve got to focus on the ways we can fix it rather than moaning about not being on the right side of [the horsepower balance].