The battle for the Drivers' Championship is on the line this weekend in the INDYCAR season finale.

This is a good INDYCAR racing weekend if you like finales.

In Fontana, Calf., the IZOD IndyCar Series marks its 19th and last race of the 2013 season on the 2-mile Auto Club Speedway oval. This race is designated as the finale for series sponsor IZOD, which had a couple of years left on a five-year pact but is leaving after this weekend. It also marks the third rung of the Fuzzy’s Triple Crown (Indianapolis, Pocono, Fontana) and a possible $250,000 bonus to either Indy winner Tony Kanaan or Pocono victor Scott Dixon if they can win on Saturday night.

The championship is up for grabs between two drivers from a pair of perennially battling teams: Two-time titleholder Dixon of Target Chip Ganassi Racing has 25 points in hand over Team Penske’s Helio Castroneves, a three-time Indianapolis 500 race winner but never a champion in his racing career (if you discount his “Dancing with the Stars” mirror ball trophy). Castroneves handily led the point standings from his Texas Motor Speedway win in June to the early October Houston round, where he fell on his sword twice during the street course doubleheader. 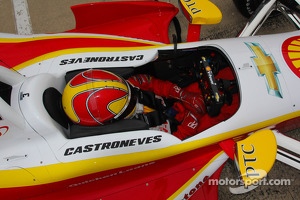 There’s a wrinkle in this battle for the championship. In the current IndyCar universe, racers are subject to using no more than five engines per year – without penalty. Every time an engine is changed prior to the 2000-mile mark, the driver and his team are relegated 10 places back from where they qualify. For a 500-mile race like the MAVTV500 on Saturday night, that’s not really a big issue as pit and race strategy can change everything.

By electing to change engines, both Dixon and Castroneves take the 10-spot penalty and that causes harm to both Honda and Chevrolet, respectively. Sure, they’re both coming to this battle with updated engines for the finale, but this pair of manufacturers are in a dead heat for their own title: in 18 races held to date, Chevy has won nine and Honda has won nine. Saturday night will decide their championship as well.

A quick look at the data shows that 16 cars are eligible to take manufacturers’ points on Saturday night among 25 entries. Of those, all but AJ Allmendinger are on their fifth engine, which means those 15 engines must stay in the car in order to score manufacturers’ points. Allmendinger is returning to Team Penske this weekend for a three-pronged effort to attempt to take the title away from Ganassi, Dixon and Honda. As Roger Penske told Associated Press, “Helio’s got to win the race and that’s a long-shot.”

If Dixon wins the race, it doesn’t matter where Castroneves finishes. In fact, if Dixon finishes fifth, the Brazilian is a loser again. Which would mean Team Penske has lost five in a row, four with Will Power attempting the championship and this one with Castroneves. That’s got to be miserable for Roger Penske, who has lost to Team Target three times already and last year to Andretti Autosport’s Ryan Hunter-Reay.

The entire weekend will go forward without the services of three-time Indy 500 winner and four-time INDYCAR champ Dario Franchitti, who’s had two surgeries since fracturing his right ankle, fracturing two vertebrae and suffering concussion at Houston on he final lap of the second race. With oval standout Alex Tagliani subbing for the Scot, Ganassi has another weapon in his arsenal that could help dislodge any Penske plans for the weekend.

Ah, but back to the engine title: Ganassi is leaving Honda after this year; he’s been with them since 1996, a very long run. Does the engine maker’s victory not matter to Chip Ganassi? I’m thinking Scott Dixon is far more of a priority to him, hence this decision to swap engines. Of course Honda may have wanted Dixon to get the upper hand on the battle and encouraged the switch, too. That will remain one of those mysteries nobody will talk about.

Of the drivers eligible to take the top spot for their engine maker, Honda has only a few, but they could be true contenders: Justin Wilson, Tristan Vautier , Simon Pagenaud, Charlie Kimball and JR Hildebrand. Of that group, all but Vautier and Hildebrand are race winners. Pagenaud and Wilson are third and fourth, respectively in points and both are very good on ovals.

All of these meanderings are moot until the sun sets in Fontana Saturday night. Hopefully there will be a good crowd on hand to enjoy the battle and even more hopefully, this will be a clean, hard-fought race. While I am always a bit skittish when working an event on the track where Greg Moore died in 1999, I’m hoping this INDYCAR race will join last year’s finale as a race to be remembered for its winners, not its whiners.

Bourdais makes the move to KVSH Racing in 2014

Viso out, Munoz in at Andretti Autosport