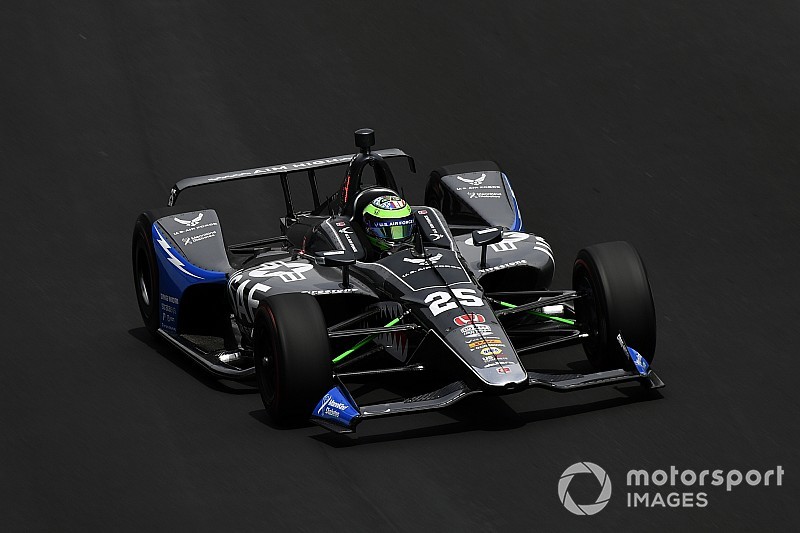 Conor Daly led an Andretti Autosport-Honda 1-2 when he got a strong tow in his final run of the day and clocked a 231.704mph lap to edge teammate Marco Andretti who had led the day’s times for almost the whole day.

With the BorgWarner turbos turned up to 1.4-bar, as they will be for qualifying this weekend, the fastest laps of the week so far were turned today, Daly beating Andretti by 0.85mph. Daly was only 22nd on the no-tow speeds, however, while Andretti was seventh.

Fastest cars without the aid of a tow were two of the Ed Carpenter Racing-Chevrolets, those of Ed Jones (230.106mph) and Carpenter himself 229.879. They were 10th and sixth overall respectively, beaten by teammate Spencer Pigot who was fourth behind Takuma Sato’s Rahal Letterman Lanigan Racing-Honda, but a strange anomaly meant that Pigot never got a strong tow-free lap and ended up 36th and last on the no-tow rankings!

Ryan Hunter-Reay was fifth overall but only 24th on the no-tows, while Simon Pagenaud, Josef Newgarden and Will Power were seventh, ninth and 11th overall for Team Penske-Chevrolet and ninth, fifth and fourth in the no-tows.

Charlie Kimball was 25th in the no-tows but eighth overall in his Carlin-Chevrolet, while Alexander Rossi was the fastest Honda in the no-tow ranks in third with a good 229mph quali-sim even in the heat of the mid-afternoon.

Due to having more available tire sets having missed 1.5 days, Fernando Alonso turned 77 laps, more than anyone but Ben Hanley, but the McLaren Racing-Chevrolet was 24th overall and only 31st on the no-tow rankings.

Aside from Kyle Kaiser’s shunt this morning, there appeared to be only one other near-miss when Graham Rahal understeered out of Turn 1 and brushed the wall on the short chute down to Turn 2.