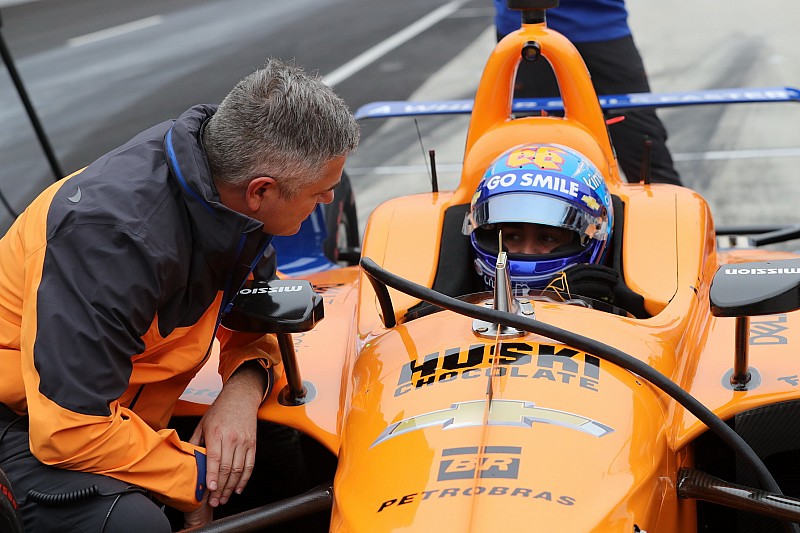 McLaren sporting director Gil de Ferran has publicly apologized to fans, partners and Fernando Alonso for the team’s failure to qualify for the 103rd Running of the Indianapolis 500.

McLaren decided to go it alone in its 2019 attempt at the Indianapolis 500, and while it had a technical partnership with Carlin, to the extent that it had a Carlin/John Cummiskey-built car as its back-up, the operation was manned mostly by in-house McLaren staff.

This was in contrast to the squad’s 2017 entry, also with Alonso, which was almost entirely run as a sixth Andretti Autosport entry.

Alonso switched from the McLaren UK-prepped Dallara to the US-built version after crashing early on Wednesday afternoon. The spare was allegedly ready to run in the last 90 minutes of practice on Thursday, but the track was then closed for adverse weather.

So Alonso didn’t hit the track again until Fast Friday, when he was 24th in overall times but only 30th in the speeds set without a tow, and in qualifying on Saturday, when the top 30 cars on the 33-car grid were decided, he finished the session 31st out of 36 entries.

De Ferran told the media: “This has been a very emotional and difficult experience, I think, not only for me but for the whole team. I want to take this opportunity to apologize and thank the fans, not only here in the U.S. but globally, who have been following our progress. I read a lot of nice things and some great messages all over the place. So thank you, and I'm sorry we won't be in the Indy 500.

“I want to also apologize and thank our team. The guys been have been working for several months, and particularly this last month or so has been a tremendous effort, and to try to come here and do the best we can, they've worked all hours in the day.

“I want to apologize and thank our partners who have been fantastic, and incredibly supportive through this journey. I thank also the whole IndyCar community, frankly, who welcomed us with open arms. All the way from the officials, safety people, all the other teams, everyone in and around IndyCar, it was nothing but a warm feeling and a lot of support.

“And I think last but not least, I want to thank this man here on my left [Alonso]. I want to apologize to you because we didn't give you a car that was fast enough. You know, you drove like the champion that we know you are. Particularly these last three days, it’s been incredibly tense and very difficult, and we couldn't have asked anything more from you, Fernando. So I'm sorry, man. You're an amazing driver.

“So you know, this is in my 35 years of racing – actually a few more – the most painful experience I've ever had. There's a mixture of emotions going on inside of me, we are racers. We respect this place, you know. This is one of the toughest challenges in racing. I want to come back tomorrow, you know? I want to fight. I want to come back tomorrow and fight. This is incredibly painful.”

Asked if he intended to buy McLaren into the 500, de Ferran echoed Zak Brown’s comments, stating: “We will not do that. We want to earn our place in the field.”

On the subject of what lessons had been learned should McLaren return, the 2001 and ’02 CART Indy car champion and 2003 Indy 500 winner commented: “To be honest, I don't really want to get into the detail of that. But we're very humble about everything that went on over here, and I think at this time I just want to say that we did learn a lot of lessons.

“We have to really look inwards and look at everything that we learned, cement those lessons and move forward. And like I said, I consider myself a racer, a fighter. I want to apply those lessons starting tomorrow.”

Brown has been open about his eagerness to see McLaren return full-time to the NTT IndyCar Series for the first time since 1979, which many observers at IMS believe would allow the marque to avoid similarly desperate disappointment next May.

Asked if this week’s nightmare would affect possible plans for McLaren’s full-time involvement in IndyCar, de Ferran said: “You try to do the best you can, drawing up plans and everything… We've certainly learned a lot of lessons here that will carry that forward, that possibility, still in consideration. But no decision has been made.”

McLaren will not buy an entry for the Indy 500

Alonso: “I prefer to be here, even 34th, than being at home”