Santino Ferrucci has tweeted a warning that although he was sorry to cause Josef Newgarden to spin on the last turn of the last lap of the Gateway race, he will not be “pulling over” to let him through. 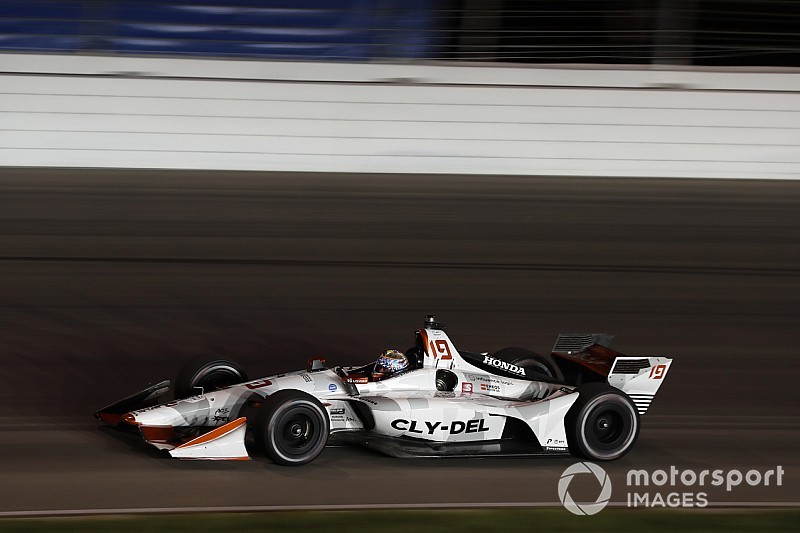 After leading 97 laps at the 1.25-mile World Wide Technology Raceway, Ferrucci’s Dale Coyne Racing-Honda was relegated to sixth for the start of the final stint due to an untimely caution period.

Ferrucci got past Newgarden’s title rival Alexander Rossi for fifth on Lap 210 as the Andretti Autosport driver desperately tried to save fuel. After being rebuffed a couple of times, Ferrucci then got past Newgarden’s Team Penske-Chevrolet on Lap 235, but had to cede fourth place again when an attempted outside pass on Ed Carpenter lost him momentum.

However, Ferrucci came back at the Penske driver and repassed him on Lap 246, before suffering a wild moment up in the gray at Turns 3 and 4 on the final lap. Wiggling back down onto the racing line just as Newgarden arrived on the scene with far more momentum forced the championship leader down to the grass to avoid a clash, after which he spun and lost two places on the run to the line.

Newgarden was angry afterward, spoke to Ferrucci, and then explained to NBCSN: “Look, it’s important to know he’s a rookie. What he did in my opinion is dangerous.

“He came over to talk to me afterward and said he was loose, that’s why he was down there, but I’ve been in the exact same position tonight, I know what it’s like to get up in the marbles. He got up there a couple of times.

“He came directly back down on the racing line to try and block at the end, and there was no reason to. I gave him the [fourth] position twice because I was suffering [tire] vibrations all night and my car was getting quite difficult to drive at the end of that stint. So I let him go two times during the night.

“But he’s got to learn that this is big-time auto-racing; if you do a move like that on an oval, particularly a high-speed oval, you will cause a very serious wreck. And he’s just gotta know that. I really drilled into him that you cannot come directly to the racing line. That was his instinct – to come right back to the racing line.

“You know, he’s a racer, you’re gonna have instincts like that, but you cannot do that in oval racing. It’s absolutely not OK. It’s a lesson. I hope he learns that and he gets that in his head.”

Ferrucci, retweeting this clip from IndyCar’s account, today responded: “Ok 2 things. First, I told him I was sorry and I was getting out of the marbles so I didn’t hit the wall myself. Second, Last lap last corner! I’m not PULLING OVER to let Josef by! I’m a damn racer, I have a championship I’m competing for too.”

Ferrucci is referring to the Rookie of the Year standings in which his second consecutive fourth-place finish has helped give him a narrow lead over Chip Ganassi Racing’s Felix Rosenqvist, as well as ninth overall on the points table.

Coyne eager to retain Ferrucci after another star performance