Firestone Tire Performance Recap: Firestone Racing brought the same tire specification to Indianapolis that produced record excitement and lead changes in 2012 – and the tires contributed to even more record-setting highlights today. Race standards were set for the number of different drivers to lead the race, the number of lead changes and the final average speed; all indicators of the stellar tire performance by the Firestone Firehawks. The final leader was Tony Kanaan, who collected his first Indy 500 victory. It is the 64th win at Indianapolis for Firestone, more than all other tire manufacturers combined. 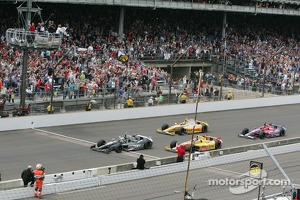 From race winner Tony Kanaan, #11 Hydroxycut/KV Racing Technology Dallara/Chevrolet/ Firestone: “I am so proud to win the Indy 500 with Firestone tires. Since I came to America in ’96, I haven’t driven for another tire manufacturer, which I’m extremely proud of. People forget how dangerous this sport is and how important it is to believe in the tires that we have, and that they are one of the most important parts of the race car. Firestone does a fantastic job, I can’t thank you guys enough.”

From winning car co-owner Jimmy Vasser, KV Racing Technology: “I couldn’t win this race on my own so I guess I had to hire the right guy to do it for me. When you’ve got a restart with three (laps) to go and you’ve got Tony Kanaan behind the wheel, you know you’re looking good. The Firestone tires were fantastic, we didn’t have any issues and we had so much grip that it allowed us to really trim the car out on that last stop. I’m so happy for Tony; he’s been close so many times. To win it as an owner is the next best thing. We are part of the Firestone family. I won all my races on Firestones, won my championship on Firestones. This is going to be one of the greatest memories of my life.”

From Al Speyer, Executive Director, Firestone Racing: “Awesome! It was easily the best Indy 500 I can remember, with new records being set all around, and an extremely popular winner in Tony Kanaan. We’re always happy when it’s a good, safe race and we saw that again today with only five caution periods and minor accidents. We’re especially proud of the fact that all of the drivers in the field compete very hard and race throughout the 500 miles inches apart, which clearly demonstrates the confidence they have in their tires. We’ll now look ahead to Detroit next weekend and the rest of the season, and already start planning for Firestone’s 65th win at Indy in 2014.”