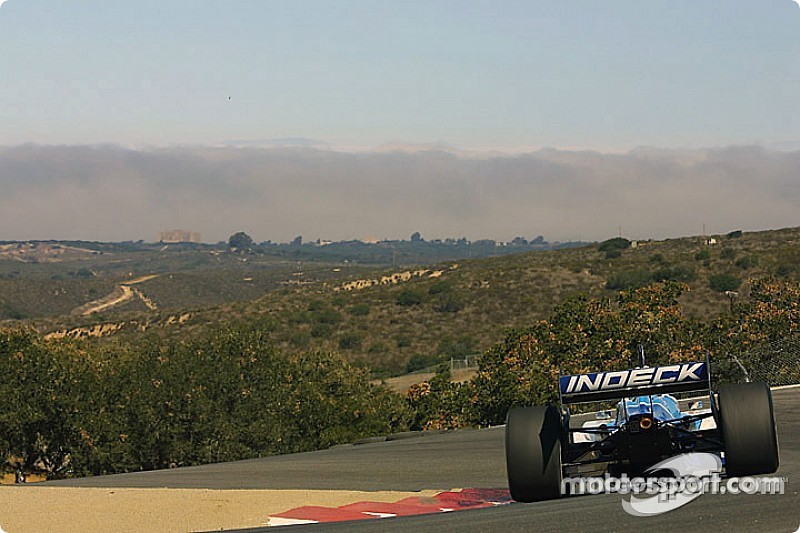 The final round of the 2019 NTT IndyCar Series, to be held at WeatherTech Raceway Laguna Seca, will be sponsored by Firestone.

Firestone, which is about to begin its 25th season as an Indy car tire supplier and 20th straight as the sole supplier, will thus sponsor the opening round of the season on the streets (and a runway) of St. Petersburg, FL, and the season finale which will be named the Firestone Grand Prix of Monterey.

Bridgestone Americas, Inc. and the County of Monterey, CA. revealed it was a two-year agreement, although for now WeatherTech Raceway Laguna Seca can only be confirmed as IndyCar’s last race for 2019. The Sept. 20-22 event will be the first for Indy cars on the 11-turn, 2.238-mile road course since 2004, when Patrick Carpentier won (pictured above) for Forsythe Racing.

“Firestone is a time-tested brand with a rich tradition in open-wheel racing, making it the perfect match for IndyCar’s return to this iconic road course,” said Lisa Boggs, director of motorsports at Bridgestone Americas. “With this new sponsorship, Firestone now will help deliver great events for fans when the NTT IndyCar Series season goes green in St. Petersburg and crosses the finish line in Monterey – while continuing to provide world-class tire technology for every lap in between.”

WeatherTech Raceway Laguna Seca, situated on the Monterey Peninsula, effectively replaces on the schedule Sonoma Raceway, which held an IndyCar race every year from 2005 through 2018.

Most IndyCar teams will be testing at WTRLS on Feb. 8th just four days before Spring Training at Circuit of The Americas.