The racing world sends off 72 year old Gary Bettenhausen, a veteran of the Indy 500.

He started in the Indianapolis 500 21 times with a best finish of 3rd in 1980, but the checkered flag has fallen for the final time for Gary Bettenhausen.

He drove for Team Penske in the early 1970s and led the most laps in 1972 before overheating took him out of contention. He finished 5th the next year in the cursed 1973 race.

In 1974 he suffered a massive accident driving silver crown cars that severely damaged his left arm and left it partially paralyzed. He never fully recovered from that injury during the rest of his driving career. Despite the injury, however, he won the 1980 and 1983 Silver Crown USAC dirt championships. 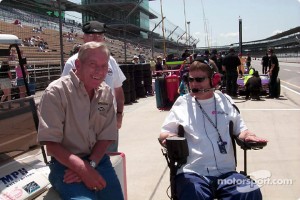 In 1980, he drove a five year old Wildcat from 32nd on the grid to 3rd place after rebuilding the engine and fuel system the night before the race with his chief mechanic in the garage area overnight. Later in the 1980s he had another flash of brilliance by qualifying a 1986 March for 1987’s Indianapolis 500 in 15th place with less than fifty miles of practice on the car. He finished 5th, staying in the race as others dropped out around him.

During the latter phase of his career he was an annual competitor at Indianapolis with the Buick engine program and, after starting in 1990, John Menard. He was the fastest qualifier for the 1991 Indianapolis 500, starting 12th but finishing 22nd.

The next year he started 5th but finished 17th, having been taken out of the race after being collected in Jeff Andretti’s debris following Andretti’s savage turn two accident.