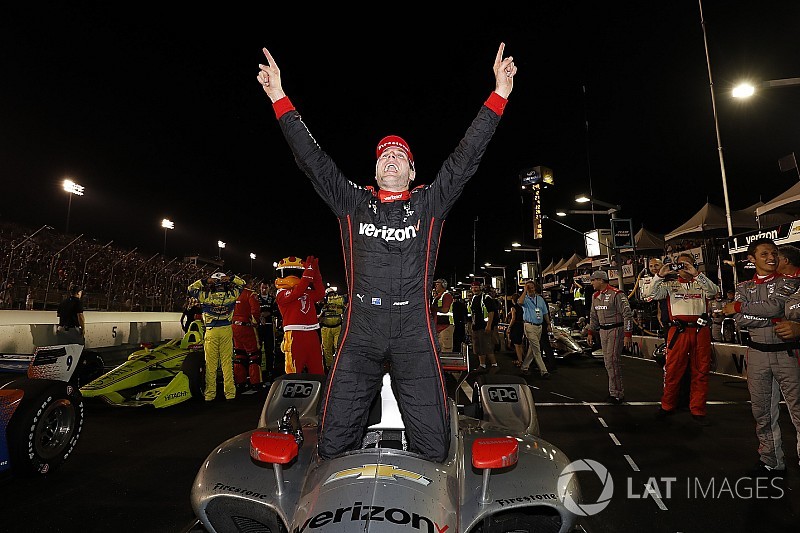 Will Power produced his third win of the season in storming fashion after a great fight with Scott Dixon around the 1.25-mile oval just outside St. Louis, while the points leader finished third after falling behind Alexander Rossi who made one fewer pitstop.

Scott Dixon’s Chip Ganassi Racing-Honda made a good start from pole, but Alexander Rossi’s Andretti Autosport machine made a poor one, and Will Power – perhaps mindful of how Team Penske-Chevrolet teammate Josef Newgarden zapped him around the outside at Lap 1 Turn 1 last year – pulled the same stunt to zoom around the outside of Newgarden and Rossi to claim second. The third Penske of Simon Pagenaud moved into fifth, while Marco Andretti rocketed up from 10th to claim sixth ahead of Andretti Autosport teammate Ryan Hunter-Reay and the sole Schmidt Peterson-Honda of James Hinchcliffe.

However, there was an incident in the middle of the pack, Sebastien Bourdais losing control of his Dale Coyne Racing with Vasser-Sullivan machine, and swerving up into the wall exiting Turn 2.

The race would restart on Lap 7, and Newgarden got around Rossi for third who tried to retaliate but couldn’t make it happen. Further back Andretti lost out as the green flag fell once more, and Hunter-Reay moved up to fifth ahead of Pagenaud, Ed Jones in the second Ganassi car. Andretti was relegated to eighth ahead of Hinchcliffe and the fourth Andretti car of Zach Veach (up from 16th).

Up front, Dixon had a 1.1sec lead after 20 of the 248 laps, he and Power the only drivers who’d managed to get through the 177mph-lap barrier. Rossi probably could have done the same, but he was bottled up behind Newgarden who had already fallen over four seconds behind the lead pair.

It was heartwarming to see Gabby Chaves, on his return to Harding Racing-Chevy, running as high as 13th, behind the two Rahal Letterman Lanigan Racing-Hondas in these opening stages. He was ahead of both Ed Carpenter Racing and both AJ Foyt Racing cars, running the same engines.

Dixon had the first of the backmarkers – the Carlin-Chevy of erstwhile teammate Max Chilton – in his sights by Lap 32, but had a cushion of 1.7sec over Power in order to cautiously make his way through, and in fact it was Power who lost more, dropping to 2.3sec behind. Pietro Fittipaldi’s Coyne car, battling with the other Carlin car of Charlie Kimball, was less accommodating for the leader, and now Power was able to close to within 0.5sec of Dixon.

On Lap 49, Rossi had momentum on Newgarden off Turn 4 and coming onto the pitstraight he quickly flicked to the left and was pulling alongside the Penske before Josef could close the door. Into Turn 1, the Andretti car was ahead.

Rossi’s 175mph laps in relatively clear air meant he was able to start reeling in the leaders, who were still stuck behind backmarkers.

Meanwhile Andretti and Kanaan made the first scheduled stops on Lap 58, Newgarden, Rossi and Dixon followed suit the following lap, while Power led until he stopped on Lap 62. He emerged alongside Dixon, but with the Ganassi driver on warmer tires, it was no contest, and the four-time champ resumed the lead. The Andretti Autosport #27 crew kept Rossi ahead of Newgarden, but their counterparts at #28 couldn’t quite keep Hunter-Reay ahead of Pagenaud, and so the 2016 champ made it three Penskes in the top five.

Once Power was up to speed, he was able to remain about a second behind Dixon, while Rossi was a similar gap behind the #12 Penske. Newgarden was not looking so happy, 3.6sec behind Rossi, albeit 4.4sec ahead of Pagenaud, who in turn was a couple of seconds ahead of Hunter-Reay.

By Lap 85, Dixon was catching traffic again – Carpenter – and had Power and Rossi stacked behind him, as he simply couldn’t get past and instead took the opportunity to save fuel. The trio was thus relegated to 170mph, and that was allowing Newgarden to come back into the frame… although his speed was limited too, by backmarkers between himself and Rossi ahead. Carpenter pitted on Lap 109 – as did Chaves who’d been up to 11th – and immediately that allowed the leaders to speed up to 172mph. Chaves, sadly, having suffered a wheelgun issue in that stop, would stop again just a couple of laps later, with a peculiar feeling from the handling of his car.

The second round of stops among the leaders saw Hunter-Reay pitting on Lap 116, Pagenaud on 117, but two laps later, there was drama when Power tried to pass Dixon around the outside of Turn 1. It didn’t work, the Penske driver slid up the track and Rossi easily pulled past him into second. Next time by, Dixon stopped, as did Power, while Rossi went two laps longer. That wasn’t enough to get the Andretti driver ahead of Dixon, but it did keep him ahead of Power who in fact lost third to the earlier-stopping Pagenaud.

Thus Dixon resumed in the lead, 3.1sec ahead of Rossi, who had Pagenaud, Power and Hunter-Reay chasing him. Newgarden, who’d been wrong-footed by Power’s attempts to gather up his car after his failed challenge on Dixon, had thus lost out in this close contest and fallen to sixth, ahead of Jones, Veach, Andretti and Kanaan.

On Lap 143, Pagenaud made a slight error through Turns 3 and 4, and suddenly Power had the momentum on him to pass down the pitstraight and gain third, and Pagenaud tumbled down to ninth.

Power was now like a champagne cork out of a bottle, rocketing onto the tail of Rossi and diving down the inside of the Andretti car at Turn 1 on Lap 146. Rossi then managed to catch the mother-and-father of all saves to keep himself off the wall, but he did lose third to teammate Hunter-Reay. Meanwhile on Lap 149, Power homed in on Dixon and this time went to the inside along the pitstraight to take the lead into Turn 1 on Lap 150, rapidly pulling a four-second advantage on the erstwhile leader.

Further back, Newgarden in fifth was having to keep an eye on his mirrors for Jones who in turn had Veach within half a second of his tail.

The second caution of the night flew on Lap 173, when Hunter-Reay’s third place turned to ashes, his power apparently cutting out, and leaving him trickling back to the pits at virtually walking pace, and still needing a tow-in to his pit box.

Pitlane opened on Lap 177 and the top seven stopped, with the order remaining Power, Dixon, Rossi and Newgarden, but Veach’s crew did a great job to get the #26 Andretti Autosport car up into fifth ahead of Jones, Pagenaud, Sato, Pigot and Rahal.

On Lap 183, it was an uneventful restart at the front, but Veach got a run on Newgarden and grabbed fourth place, while Pigot got around Sato to claim eighth. On Lap 195, Jones went down the inside of Newgarden at Turn 1 to snatch fifth, and a lap later Jones had taken Veach for fourth.

The pace of the leaders – 167-170mph – suggested they were trying to make it on three stops initially, but Jones clearly wasn’t. He zoomed past Rossi for third and closed on Dixon. Veach – who then passed title-contending teammate Rossi – was also in the ‘cut loose and go’ category.

Eventually it appeared that Roger Penske also let Power off the leash, and decided he’d commit to another stop. He pulled away from Dixon, amassing a 6sec lead. Rossi, meanwhile, appeared to be sticking to the plan to not stop again. He let Pagenaud and Pigot – who’d had not only a fuel stop but a fuel top-up under the previous yellow – pass him, and Newgarden eventually did the same.

Veach, Pigot, and Newgarden passed Jones, and the #10 Ganassi car stopped on Lap 225.

Power pitted on Lap 231 for a splash and go, without new tires, but he emerged behind Rossi. Between them was Andretti, but he didn’t pull anything tricky to protect his teammate, and soon enough Power was past them both. As the cars ahead stopped, Power reassumed the lead on Lap 240, while Rossi’s economy drive had paid off, jumping him ahead of Dixon who also got held up by Fittipaldi on his in-lap and encountered traffic between himself and Rossi.

Dixon ran out of laps to make it happen, crossing the line 1.5sec behind Rossi, while Rossi was 1.3 behind Power who scored his 35th career victory and third of the season.

Pagenaud came home fourth, ahead of excellent performances by Veach and Pigot, while Newgarden eventually beat Jones for seventh. Sato and Rahal completed the top 10.

Wickens breathing without assistance and speaking

Victorious Power sure he's in contention for IndyCar title