The Davey Hamilton and Sam Schmidt partnership was so successful last year, they have agreed to do it again for 2013. This year Pagenaud will have Tristan Vautier as a teammate.

INDIANAPOLIS - After a highly successful rookie campaign that saw Simon Pagenaud threaten for race wins and finish fifth in the IZOD IndyCar Series Championship, Davey Hamilton and Sam Schmidt will join forces once again in 2013 to field Pagenaud in the No. 77 Schmidt Hamilton HP Motorsports Dallara/Honda/Firestone car. 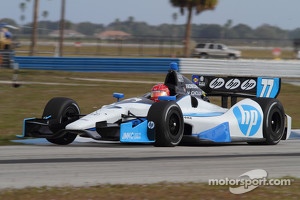 As a one-car team in 2012 the Schmidt Hamilton Motorsports partnership yielded strong results with Pagenaud landing on the podium four times.

During the off-season Sam Schmidt added equity owner Ric Peterson to form Schmidt Peterson Motorsports (SPM), which resulted in the addition of a second IZOD IndyCar Series entry and teammate for Pagenaud.

"I'm happy that Sam and I are going to continue our partnership with Simon driving the #77 car," Davey Hamilton said. "We had a great season last year and Ric Peterson joining Sam should make the entire team even stronger. Without Ric there would have been no way to sign Tristan (Vautier) and provide Simon with a teammate."

The second car, driven by rookie Tristan Vautier, will increase the data available to Pagenaud's engineers and elevate both programs.

"After seeing Simon run neck-and-neck with some of the strongest cars in the IZOD IndyCar Series last year, we are hungrier than ever to start winning races," Sam Schmidt said. "With Davey and HP on board again in 2013, we're one step closer to accomplishing our goals. Being aligned with a technology giant like HP is an honor and truly elevates our team."

Hamilton's skill set and experience with oval racing is another added benefit for Pagenaud.

"We think Simon really benefits from Davey's input at the oval tracks on the IndyCar schedule since Simon is still relatively new to them," SPM equity owner Ric Peterson said. "Working together in 2013 will give us continuity and an opportunity to build on the success of 2012."

Pagenaud's #77 car will continue to sport the light blue and white Hewlett-Packard colors.

"HP has been a great partner for me over the years and I'm looking forward to new and exciting accomplishments on track with them," Hamilton said.

Allmendinger’s Road to Recovery may land him back with Penske