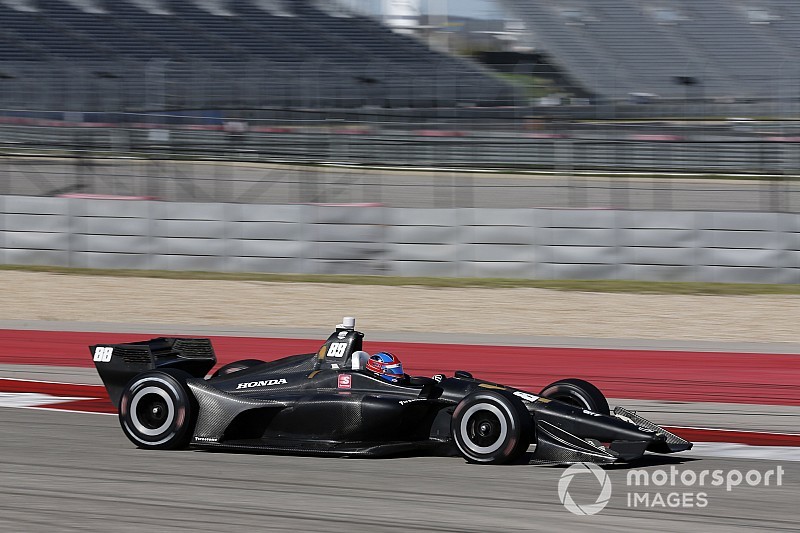 The Harding Steinbrenner Racing-Honda team had been surrounded in controversy since Indy Lights champion Patricio O’Ward split from the team after just one race, following his discovery his ride for 2019 was not full time.

When fellow rookie and Indy Lights runner-up Herta – who is guaranteed a fulltime seat with HSR – ended the first day of Spring Training at Circuit of The Americas almost half a second quicker than second placed Will Power of Team Penske-Chevrolet, rumors swirled about whether the car was in legal specification.

The following day, Herta topped session 3, and only traffic in session 4 prevented him from a clean sweep of the 11 hours of track time at COTA.

With tech inspection during the test not compulsory, one obvious theory was that the HSR entry was running underweight – a well-known pre-season ruse for a team trying to attract sponsors with eye-catching performances.

When Herta was spotted easily able to closely track fellow competitors even through long-duration corners without significant front-end washout, another theory emerged – that his car was running a much lower ride-height than will be legal on a race weekend, thereby creating increased downforce from the underside of the car.

However, Gosselin says that Harding-Steinbrenner – which is now using Andretti Autosport engineers as they did in last year’s final round of the season – enabled Herta to produce his brilliant pace on merit.

Asked by Motorsport.com if Herta’s laps were legitimate, Gosselin replied: “Oh yeah,” although when asked if he was surprised at the size of the #88 car’s advantage, he laughed, “I think a lot of people were.

“Colton’s a new driver to the series, just one previous race in IndyCar. Whatever anyone thinks about the team, the driver is a big part of a car’s success and you don’t know anyone’s potential when they just join. [Marcus] Ericsson – how good is he going to be? [Felix] Rosenqvist – how’s he going to be?

“So until people come in and mix it up week in, week out, you don’t really have a feel for how they’ll perform.”

On the subject of whether HSR staff – Nathan O’Rourke, Marco Andretti’s ex-race engineer, and Andy Listes – had shared their setups with Andretti Autosport overnight between the Tuesday and Wednesday tests, Gosselin replied in the affirmative.

“Well they’re our engineers down there, they’re proper Andretti Autosport employees, that’s how this deal’s working. Andy has been with us for something like 10 years, Nathan’s been here six or seven years. They’re super-smart guys, and yes, it’s an open book between us all. It’s meant to be that way.”

Hunter-Reay finished the final session of the test in third, and fourth in the combined times across two days. While Gosselin was left reasonably satisfied he admitted some aspects were inconclusive.

“Alex [Rossi] had been here before doing tire testing but it was more of an uphill climb for us to find a setup, learn the track, learn the tire.

“And it was tough for us to get a lap together, between traffic, red flags, and some of our own problems here and there. Over two days, we only had one run on new tires that didn’t have an interruption of some sort.

“In that regard, it was the weirdest two-day test Ryan and I ever had – finding it so hard to just get in a new-tire run. Even at the end, 10mins to go, we tried to do that and out came the red for a spinner.”

For the first time since IndyCar’s latest turbo era began in 2012, Honda will be attempting to defend a Manufacturers’ title, and Gosselin said he had been impressed by what he had seen from the 2019-spec units built by HPD in Santa Clarita, CA.

“It seems good – the driveability and all that stuff was strong, it seemed apparent to us. They’ve done a good job.”

Asked if he felt HPD still had an edge, Gosselin replied: “Well, let’s wait until we get to Indy [where Chevrolet looked stronger last year]. That’s the one we’re all worried about, because if you’re not on it from the beginning, it’s really hard to dig your way out of it.

“But we can hope, right? We can just do the best that we can do, and HPD will do the same.”

Gallery: The best photos from IndyCar testing at COTA