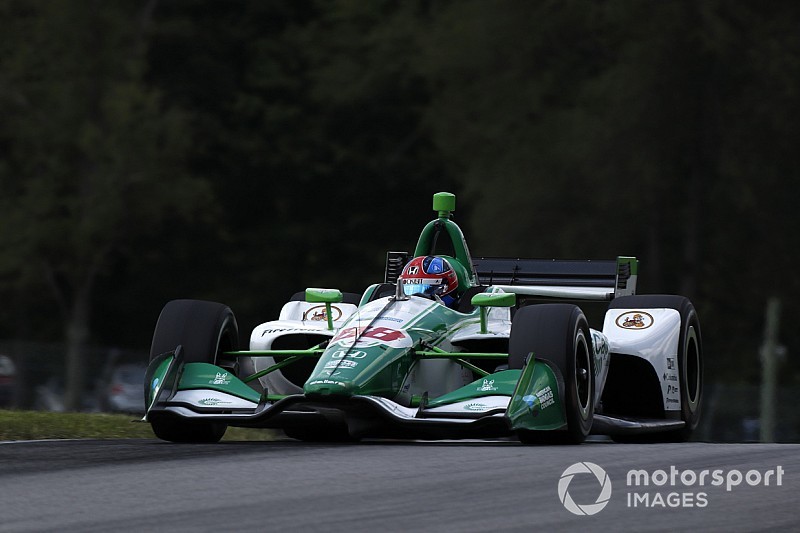 Herta’s 65.705sec lap on primary tires was faster than he lapped on the softer alternates yesterday, and beat Pigot by just 0.0577sec while heading a total of seven Americans in the Top 10.

Behind Pigot, Rossi’s Andretti Autosport-Honda showed an encouraging leap forward on fresh primaries, lapping 0.17sec off top spot ahead of James Hinchcliffe who continues to shine this weekend in the Arrow Schmidt Peterson Motorsports-Honda.

Santino Ferrucci headed the session for much of the time in the Dale Coyne Racing-Honda, and finished up just a couple of hundredths quicker than local hero Graham Rahal whose Rahal Letterman Lanigan Racing-Honda made a big step forward from yesterday.

Josef Newgarden in his repaired #2 Team Penske-Chevy was the fastest of his team, although teammate Will Power in 10th appeared to be testing the durability of the primaries with longer runs and still managed to set his fastest time on his final lap.

Ryan Hunter-Reay was eighth for Andretti Autosport, ahead of Sebastien Bourdais in the second Coyne (with Vasser-Sullivan) machine.

Series returnee RC Enerson spun his Carlin-Chevrolet out of Turn 9 and needed rescuing with the aid of a red flag, while Felix Rosenqvist dug his own way out of the Turn 4 sandtrap after a tortuous route back on track, but the Chip Ganassi Racing Honda driver finished the session in 20th.