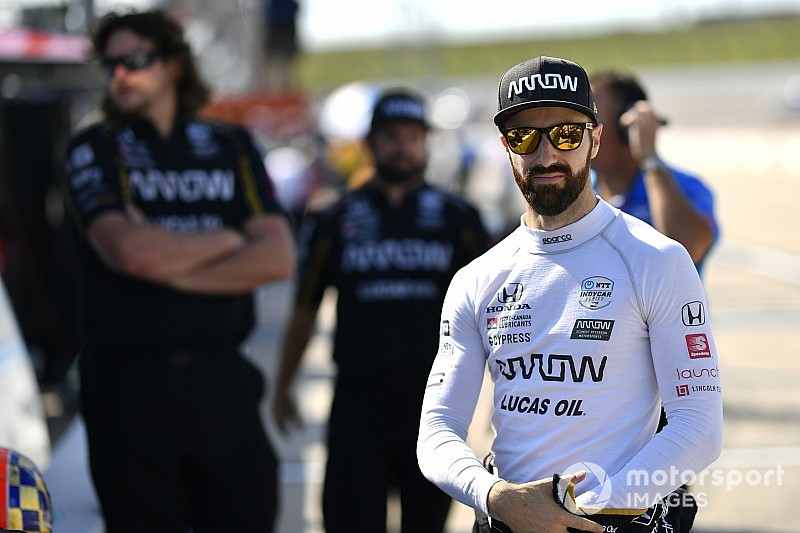 Arrow Schmidt Peterson Motorsport-Honda driver James Hinchcliffe has admitted that it’s shocking to consider that it took until the 12th round of the NTT IndyCar Series season to land a top-three finish.

The 2018 Iowa winner started fifth and remained in the hunt all night, eventually prevailed in a skirmish with Dale Coyne Racing’s super-brave rookie Santino Ferrucci and took the final restart in third place. He then passed Simon Pagenaud’s Penske-Chevrolet but had to cede second place to Scott Dixon whose Chip Ganassi Racing-Honda was on much newer tires.

“I think kind of best of the rest after Josef is probably where we were,” said Hinchcliffe. “That first stint, the #5 car was a little off. We were just kind of learning, feeling out the track, seeing what the setup really was like.

“Big credit to the guys. Every time we came into the pits, we made it a little bit better. Adjusting tire pressures, wing, whatever. Working with the tools in the car, every stint we took a step forward. We were picking guys off slowly. Fell back to seventh.

“To get Simon on that last restart, running second … A shame Seb[astien Bourdais] was involved. He definitely stopped us from getting after Josef. Obviously Scott, with the brilliant call with tires, came up and got around us. But we were starting to come back and a couple more laps, it would have been a good little battle.”

The Canadian who currently lies ninth in the points standings admitted that the result was a relief for all involved at Arrow SPM, particularly those on his car. (Rookie teammate Marcus Ericsson finished runner-up in the second Detroit race).

“For the No. 5 guys, it's been a tough year,” Hinchcliffe said. “A lot of rough luck on Sundays. We're happy to be back on the podium here in Iowa, where we've had success before. Hopefully we can carry this momentum into Mid-Ohio…

“It's kind of shocking actually that it's the first podium of the year. It just kind of sums up our year. We’ve had good racecars on Sundays, had bad luck. A mistake or two of our own.

“We've been there or thereabouts. Fighting for the odd win, fighting for a couple podiums, just had unlucky breaks. To kind of have a clean evening, not have anything work against us, it's nice to be back up here. I think that we've had we've had some races we probably should have been on the podium.

“That's racing. We’ve just got to keep doing what we're doing as a team and hopefully see a few more podiums before the end of the season.”