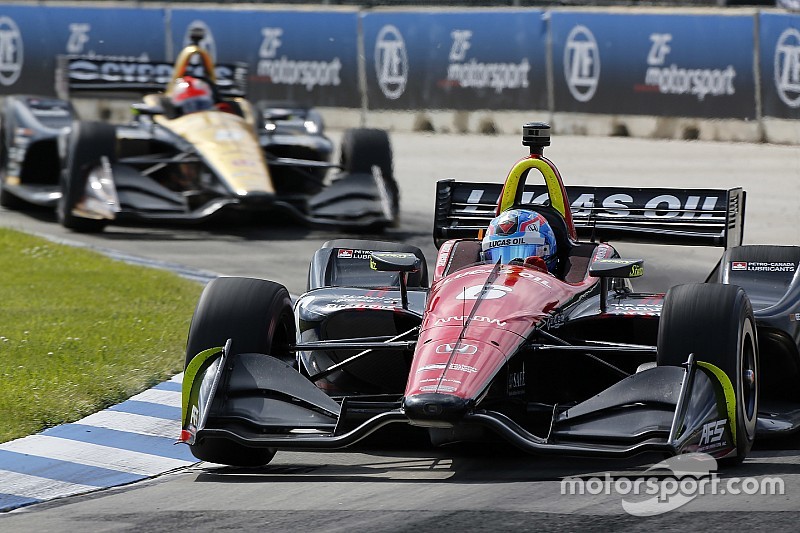 James Hinchcliffe says that Robert Wickens’ input into the Schmidt Peterson Motorsports team in his rookie IndyCar season will remain relevant this year, despite his injured friend’s absence from the cockpit.

Wickens, who enjoyed a standout rookie campaign in which he scored several podium finishes, then suffered a horrendous shunt at Pocono Raceway that left him with a spinal cord injury.

But while the 29-year-old continues to battle back to fitness, his longtime friend and rival from karting days Hinchcliffe is positive that the legacy of Wickens’ first 14 races with SPM-Honda will still help the team.

“IndyCar’s 2018 spec aerokits haven’t changed for this coming season and there are no major changes to the tires,” he told Motorsport.com, “so no doubt, Robbie’s input will still be felt.

“He helped push the direction of the team, particularly with the roadcourse setups, and found a really good direction. Without changes to the cars, those setups will still be relevant and can pay dividends in 2019. And it’s absolutely our hope he’ll still be involved in the engineering side in some capacity and give us input.”

One of the reasons for Schmidt Peterson looking consistently strong in 2018 was said to be the huge degree of commonality between what Hinchcliffe and Wickens wanted from their cars, despite their driving-style differences. Hinchcliffe says he’s been pleased to find that what he and new teammate – Formula 1 exile Marcus Ericsson – are seeking from their cars is also reassuringly similar, a fact he confirmed in yesterday’s 11-car test at Sebring.

“I wasn’t there for Marcus’s first run in December,” he said, “but I heard we were pretty close, based on what the engineers saw from him.

“But even so, I was surprised to see just how close we were, now we’ve had our first chance to run together on the same day. In the afternoon, we tried different directions but with similar components, and our feedback was almost identical.

“Sure, it was only Day 1 in our work together but I’m cautiously optimistic we’re on the same path.”

Although Ericsson finished the day eighth fastest, 0.63sec slower than his veteran teammate, Hinchcliffe said that was irrelevant.

“Marcus really hit his stride at the end of the day, and the final lap times don’t do him justice because of track conditions,” he observed. “He was able to go really quick when everyone else was having to slow down, so I’d say he had a great day.”

Ericsson will run the #7 car this year as team owners Sam Schmidt and Ric Peterson do not consider him a replacement for Wickens. Instead, the #6 is being kept vacant until whenever Wickens feels ready to try an IndyCar again.

Hinchcliffe, who has six IndyCar victories to his credit, said that although Sebring lap times aren’t necessarily relevant, he was happy to be fastest in yesterday’s test considering how productive it had also been in trying multiple setups.

“Certainly it’s not a bad way to pick up driving duties in 2019,” he remarked. “I haven’t been in an IndyCar since last September in Sonoma, so it’s reassuring to know I hadn’t forgotten how to turn left and right or how to use the gas and brake…

“But seriously, it was a very productive day. Our program was about knocking off some big-ticket test items that we wouldn’t normally get to on a race weekend. They’re too big to risk trying in a 45-min practice session on a race weekend

“But I’m proud of the guys that we kept our focus. Even when the car was really quick in the morning, we were prepared to completely abandon that setup in order to keep checking off items on the test list. We didn’t get side-tracked by the temptation of pursuing Sebring lap times, which ultimately don’t mean a lot.”

That said, Hinchcliffe didn’t deny that his best times – he set fastest time in the morning and afternoon sessions – were the result of qualifying simulations.

“Yeah, on the new-tire runs we chased the ultimate time,” he said, “because you’ve got to get yourself and the team tuned up for qualifying sessions.

“We’ve only got a few more test days at Laguna Seca and Spring Training at COTA before we head off to St. Petersburg [for the opening round of the season], so it’s important to be prepared for everything a race weekend throws at you.

“You try to run these tests like a race weekend as much as possible. You make setup changes in a timely manner and conduct yourself on pitlane as if you had only 45 minutes of running time, like in our practice sessions. That’s a good refresher.”

In terms of priorities however, Hinchcliffe said his and the #5 SPM-Honda team’s focus was improving rear-end stability – something that Josef Newgarden and Penske pursued when they tested there last December.

“That’s something we struggled with all last year,” said Hinchcliffe, “so we went to Sebring with big changes to apply and try. As I said, some of them worked better than expected, some of them didn’t work at all, but that’s why we go testing.

“It’s obviously only Day 1, so the things we liked at Sebring need to be corroborated at other tracks, but if it all goes according to plan, then what we’ve done is open our window in terms of setup options going forward.

“I felt last year we sometimes felt backed into a corner and had to sorta ‘make do’ but if what we found at Sebring works elsewhere too, then we should have a lot more adjustability in the car which will obviously serve us well.”