Honda shows off its Indy 500 challenger 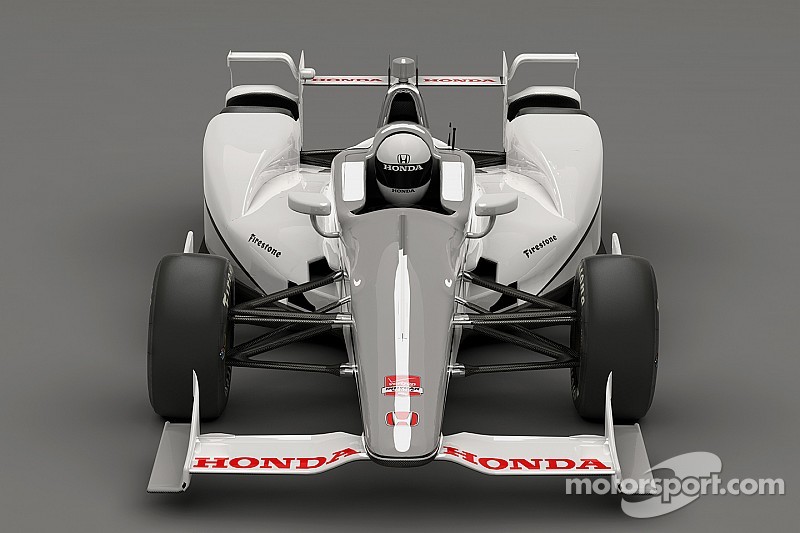 Honda is first out of the box, unveiling its completed Super Speedway aero kit in advance of Sunday’s initial test for Honda and Chevrolet’s individual renderings on the DW12 Dallara chassis used by all Verizon IndyCar Series teams.

Honda has debuted its Super Speedway aerodynamic upgrades and components for use in the 99th Indianapolis 500, set for May 24 at Indianapolis Motor Speedway. Produced by Honda Performance Development (HPD), Hondas racing group for North America, the kit includes components fitted to the existing DW12 Dallara IndyCar chassis and, Honda hopes, will give the 17 Honda Indy 500 entrants the ability to maximize performance at Indy and other large ovals on the 2015 schedule that are over one mile in length.

“We’re excited to unveil our Super Speedway aero kit, the newest element in this era of enhanced manufacturer competition,” said Art St. Cyr, president of HPD. “Coupled to our proven Honda Indy V-6 engines, these aero kits are the products of thousands of hours of research, development and testing, as we seek to give our drivers and teams the tools they need to win the race that Honda holds as its most important goal each season: The Indianapolis 500.”

HPD has used extensive Computer-Aided Design (CAD) and Computational Fluid Dynamics (CFD) technology in designing and constructing components for the Super Speedway aero kit; the components have been validated using Driver-In-Loop (DIL) Simulators. Honda believes this process minimized waste at the prototype stage of the project, allowing aerodynamic direction to be determined prior to the building of full-size components.

The engine maker then employed full scale wind tunnel testing to confirm actual aerodynamic performance characteristics and to create aero maps to be used during on-track testing. The final proof-of-concept correlation then took place with on-track testing prior to the start of aero kit production earlier this year.

As with the road/street course aero kits used in the first four contests of the 16-race Verizon IndyCar Series season, the Super Speedway kits offer Honda’s drivers and teams a range of configurations to tune the cars to their desired characteristics for Indianapolis, where fine-tuning is essential to gain the desired results.

That’s why, with the single Open Test day on May 3rd (this coming Sunday) and following the start of official practice for the 99th Indianapolis 500, all teams will be on-track to test and tune their aerodynamic settings, leading up to qualifying the following weekend.

Cheating the air is an art at Indianapolis. Honda is hoping its choices for aerodynamic configurations will help the manufacturer attain its third Indy 500 victory since Chevrolet re-entered the series in 2012. Honda won that year with the now-retired Dario Franchitti earning his third Indy 500 victory and last year, with Ryan Hunter-Reay attaining his first Indy 500 win.