Hunter-Reay released from hospital, in doubt for race 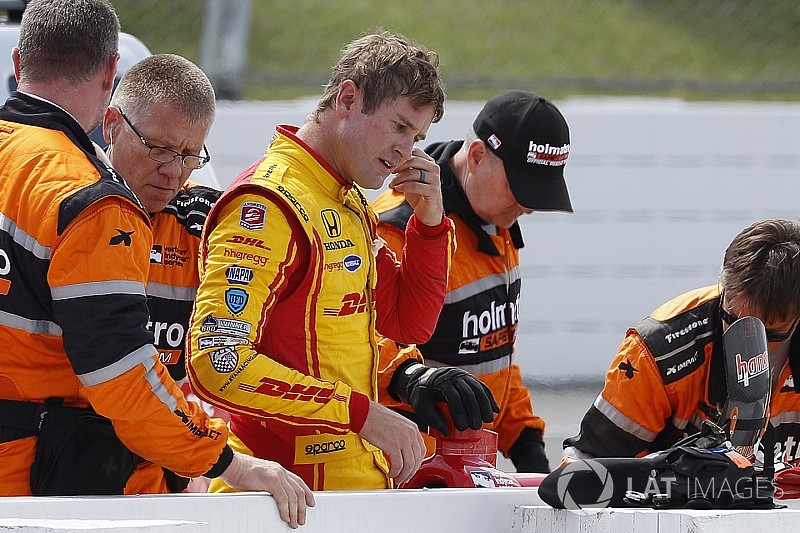 The Andretti Autosport driver was released from Lehigh Valley Hospital - Cedar Crest in Allentown on Saturday evening, having been taken there by road for checks after a heavy impact with the wall during qualifying.

But an IndyCar statement said Hunter-Reay, who suffered hip and knee injuries, was not yet cleared to drive and would be re-evaluated on Sunday morning.

Hunter-Reay tweeted on Saturday night that the impact had measured 138G. He expects to "wake up sore" on Sunday but hopes he can still race.

"During qualifying today, out of nowhere, the car stepped out on me," Hunter-Reay said. "It was a bit of a wiggle, which I caught.

"The second time it happened, it came with no warning - which is a bit confusing.

"I hit my hip pretty bad as well as my knee, so the doctors thought it would be best to go in for further evaluation.

"After a CT scan and MRI, I am able to go and get a good night's sleep."

If he is cleared to race, Hunter-Reay believes he can still take victory.

"I know the entire Andretti Autosport team worked hard to get the car put back together and with 500 miles, there is still a chance to win from the back of the field," he added.

Hunter-Reay's accident was one of three big impacts at Pocono on Saturday, with Ed Carpenter crashing in practice and Helio Castroneves doing so shortly before Hunter-Reay in qualifying.

Carpenter, who missed qualifying, and Castroneves were both able to run in Saturday evening's final practice session in their repaired cars.

Hunter-Reay cleared to drive at Pocono after 139G shunt