Hunter-Reay still thinking about wins that got away 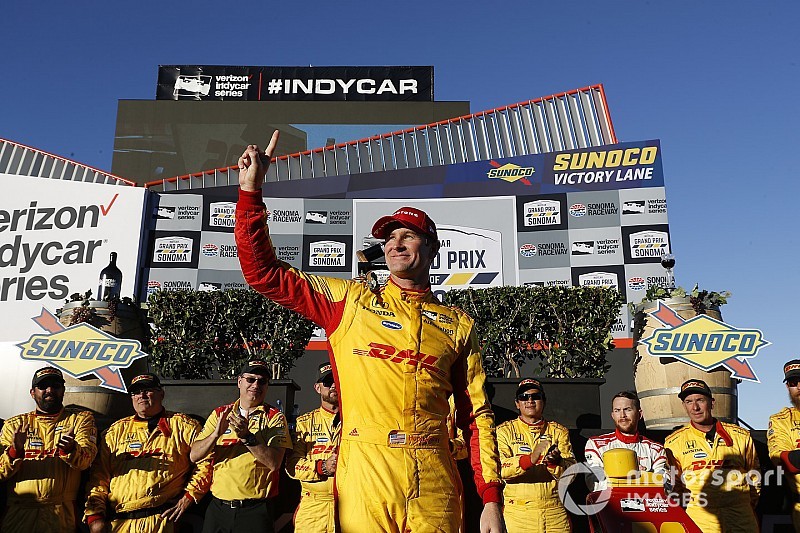 Ryan Hunter-Reay, who produced one of the most dominant victories of the IndyCar season at Sonoma on Sunday, admits that he still thinks about the potential triumphs that eluded him.

The 37-year-old, who won the 2012 IndyCar Series championship and the 2014 Indy 500, suffered a victory drought between August 2015 and June 2018, largely a result of underperformance with the Honda manufacturer aerokit, and also bad luck.

He ended that losing streak with a scorching performance in the second race in Detroit, while yesterday at Sonoma he led 80 of the 85 laps from pole position to score the 18th win of his Indy car career that stretches back to 2003.

“I'd love to get into the 20s, no doubt about it,” said Hunter-Reay who has completed his ninth year with Andretti Autosport. “I start thinking about numbers and race wins, I can't help but think about all the ones that slipped away. Every racecar driver is like that. You think of the ones that should have been.

“I guess it comes with it when you concentrate on winning races like we did this weekend. That's what we're going to do. Every year I can think about six races that got away from us and why. Had they not, we would be right there fighting in the championship. Should have, could have, would have…”

Hunter-Reay attributed his latest triumph to being able to get out into the lead immediately from the seventh pole of his career, thereby avoiding the dirty air in the wake of rival cars.

“You control the race from there,” he said. “I think clean air was a big deal today. Just having that extra little bit of downforce on the car. We were about 1500 pounds shy in downforce [due to the 2018 spec aerokit] from where we were last year, which is massive.

Hunter-Reay said that the mid-race restart with eventual champion Scott Dixon on his tail, was the only time he felt threatened, aware that Dixon wanted to win IndyCar’s final Grand Prix of Sonoma as well as the title.

“I know Scott. He wants to win every weekend,” smiled Hunter-Reay. “He knows I can race him clean. He races me clean. I thought we were going to have a little tussle. He was on the Firestone [alternate] reds, they come up quicker in temp. But as soon as we settled into a pace, I was able to pull away and open it up.

“My only tense moment of the race was catching the lapped traffic at the end when I had burned up the rears a little bit maintaining the gap to Scott and Will [Power]. When I started catching those guys, that was at the time my tires were at their worst. With the dirty air, sliding around a little bit, it started becoming a little interesting at the end.

“I [also] had a big moment in Turn 2 where I lost the rear and had a huge correction. It was one of those that almost could have went around. From there, it was mistake-free. Just put my head down.”

Hunter-Reay praised teammate Alexander Rossi for his title-challenging year, and also Dixon for a fifth championship.

“Alex did a great job this season,” he commented, “absolutely opened a lot of eyes. I know he has a bright future here, a lot more race wins ahead of him. I'm certain he's a future champion.

“But congratulations to Scott. Five-time champion. To do that in this era of racing with reliability the way it is, the evenness and competitiveness of teams, is unbelievable. It's amazing to think of what he's accomplished.

“It's great to share the track with him. Even better to beat him at times!”

Why Scott Dixon is a five-time IndyCar champion