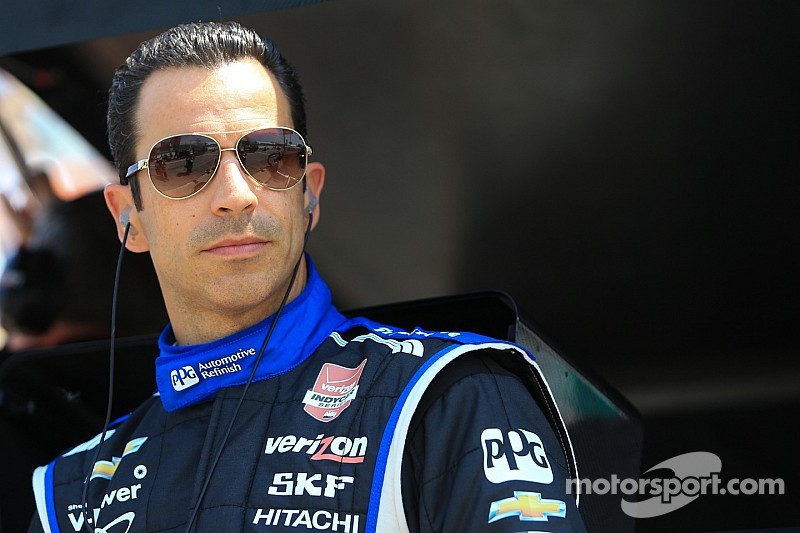 'It stings a little bit,' he admits.

FONTANA, Calif.--Helio Castroneves  has 29 wins including three in the Indy 500 in his Verizon IndyCar career. The missing piece to what should a place in several motor racing Halls of Fame is an IndyCar  championship. He finished second this season for the fourth time.

Did he climb out of his Team Penske Dallara-Chevrolet upset? No. The good-natured 39-year-old Brazilian took it in stride.

“It’s another second,” he said, laughing. "Talking about the team, obviously, it’s great. In the end of the day, it’s a great season for Team Penske.”

It certainly stings a little bit.

Castroneves knew he had to win the MAVTV 500 in the season finale Saturday at Auto Club Speedway to have any chance of overtaking teammate Will Power for the championship. He applied pressure on Power, who has been known to buckle under it on ovals during his career, by leading 41 laps.

But Power raced Castroneves side-by-side following the races only restart on lap 187 and took the lead two laps later. Power was still running in the top five and ahead of his title rival when Castroneves pitted on lap 120. He did it incorrectly and was assessed a drive-through penalty by IndyCar, putting him out of contention for an unlikely race win and ending his championship hopes.

Castroneves entered the pit lane off the back straight in turn three and went over the white line onto the track between three and four.

“I actually went over the line on the apron in between turns three and four,” he explained. “So, that's a penalty. And then if you cross over, that's the right penalty. Unfortunately, when you touch the wheel with the line, the car pulls away and I was two wheels over actually.”

Castroneves went a lap down and finished 14th.

Not stellar, but 'pretty good'

“It was an interesting night,” he said. “The AAA Shell car was actually pretty good.  Not stellar, maybe (not) the fastest guy out there, but we were able to manage pretty well, stay in the top five, top three, I think.  Pit stops, we were doing great.

“In fact, at one point they put us in the lead and I was just cruising.  The yellow came. When we had the pit stop from the lead, went to third and it was just chaotic.  After that pit stop, my car changed a little bit-‑ I was getting a lot of understeer.  And in the last pit stop, I thought the only chance for me to get it (win and keep championship hopes alive) is to do another mega in and out.   So that's (penalty) what put us one lap down.  And after that it was just bring it home.  And another great successful season for Team Penske.

“I'm proud of the team.  I'm happy.  I'm tired.  And, well, it's another second place we collect in our trophy collection.”

Castroneves finally admitted some pain to being second again in the championship.

“It stings a little bit,” he said. “But that's what motivates me.  Because it's good.  It's good to be upset when you finish second in a championship, which gives me another reason to come back stronger next year and fix it, what we can fix to win a championship.

“But I'm happy that we're still pushing as hard as we can.  And it certainly stings a little bit.”