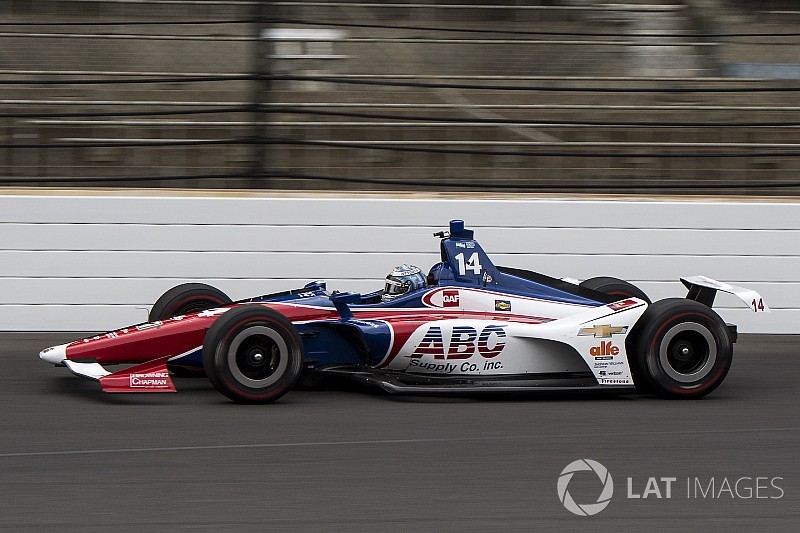 Tony Kanaan put the #14 AJ Foyt Racing-Chevrolet on top in the final practice session for the Indianapolis 500, but Danica Patrick was able to complete only 15 laps after suffering an ECU problem.

With several drivers turning more than 40 laps and Graham Rahal making 51, Patrick managed by far the fewest, but could draw just a little consolation from eighth fastest.

Kanaan, meanwhile, turned 38 and on his 19th tour of the iconic 2.5-mile oval, he set a best of 227.791mph – more than 2mph faster than second fastest driver, his erstwhile teammate at Chip Ganassi Racing-Honda, Scott Dixon.

Marco Andretti was third fastest for Andretti Autosport-Honda, ahead of Sebastien Bourdais’ Dale Coyne Racing-Honda and the Carlin-Chevy of Charlie Kimball.

Defending Indy 500 winner Takuma Sato was P6 for Rahal Letterman Lanigan Racing-Honda ahead of the fastest of the Team Penske-Chevys, that of Will Power.

Patrick ended up a tad quicker than teammate Spencer Pigot in ninth, while Ed Jones Racing ensured both Ganassi entries were in the top 10.

Unlike in most previous Carb Days, pitstop practice was kept to a minimum, as most teams and drivers focused on resolving handling issues in the increasing temperatures. Sunday’s weather forecast suggests it will be 93°F ambient.

The Pit Stop Challenge will begin at 1.30pm.