Christopher DeHarde reveals his predictions for the 2014 Indianapolis 500.

Highest finisher from the front row: I’m going to say Will Power. Ed Carpenter did well last year, but bad strategy hurt him in the end. I think Hinchcliffe did well in qualifying, but given his injury, four laps is not going to tax the mental reflexes as long as 200 laps will.

Biggest gainer in the field: I’m going to say Buddy Lazier. He had the 14th fastest car on Carb Day and starting last, he could surprise some people. Now, he has to run hard after it, because in 2008, he ran near the back of the lead lap and ended up finishing five laps down. But if he runs hard, he could be most improved. 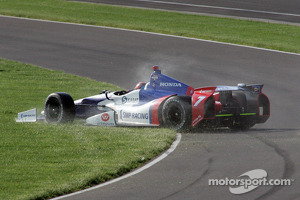 Biggest loss in the field: I think Mikhail Aleshin will lose the most amount of spots in the race. Being new to ovals, he may go from being one of the drivers that will hit the wall, to be a driver that hits the wall. But, he might surprise some people and stay in it, who knows.

Driver with the most to race for: Oriol Servia. A perennial journeyman, he’s had some good runs recently at the Speedway, but has been left out in the cold. With a good result, he could bring in enough funding for a few more races this season.

Winner: Will Power, Ryan Hunter-Reay or Helio Castroneves. Power won the last oval race, Hunter-Reay finished second last year, and Helio wants to get into the 4 timers club and bring the Pennzoil car its fourth win.

33rd place finisher: I’m thinking either Carlos Huertas or possibly James Davison. Huertas has never raced on an oval, and the last time Davison ran on an oval that I could see was 2009 in Indy Lights. They might be in over their heads today.

Highest finishing rookie: Jack Hawksworth. Being with a winning team and having a seasoned Indy 500 driver owning the car you drive being there to help you out will certainly give Hawksworth an advantage. Sage Karam would have gotten this spot, but that would depend on strategy. Don’t count him out, though.

Kurt Busch ready to double down

More from
Will Power
IndyCar