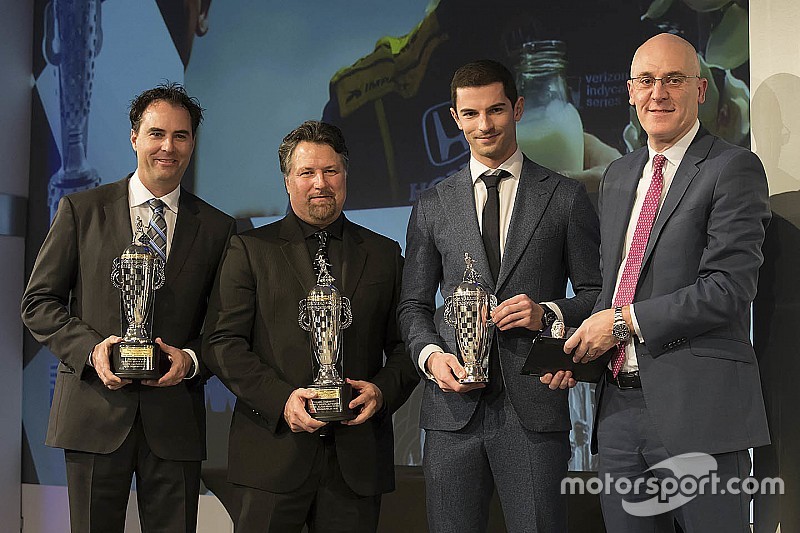 BorgWarner, whose trophy has been presented to the winner of the Indy 500 since 1936 has, in addition, been crafting ‘Baby Borgs’ for the winners since 1988. These are set a on a marble base and carry a copy of the same sterling silver effigy of the winner that is applied to the 5’ 4” original trophy which weighs 110lbs, is valued at $3.5m and is on permanent display at the Indianapolis Motor Speedway Museum.

As part of the NAIAS Show in Detroit last night, Rossi, Andretti and Herta received their Baby Borgs from BorgWarner president and CEO, James R. Verrier.

Andretti, who is famous for his near-misses at winning Indy as a driver, has now won four “500s” as a team owner, including two of the last three. He told Motorsport.com that despite the preamble to last year's Month of May being dominated by discussions of domed skid plates and whether Honda could trouble Chevrolet, he recalled he had confidence that the HPD units would be strong at IMS from the final pre-May test at the Speedway.

“We ended that test with happy drivers, and we were feeling pretty good at that point,” said Andretti whose four-car team of Ryan Hunter-Reay, Marco Andretti, Carlos Munoz and Rossi was bolstered at Indy by a fifth entry driven by Townsend Bell. “But we still didn’t know where we’d be horsepower-wise until we got there for the Month of May. Honda did a tremendous job to give us the power to run up front and be able to have a big month. Hats off to them, for sure.”

Despite having the absolute pace to run at the front, Andretti says there were too many scenarios for any team to have all bases covered in terms of whether the race would be decided by a flat-out sprint to the finish or, as in Rossi’s case, it was trying to complete one fewer pitstop than his rivals and eke out the fuel to the finish.

“Those decisions have to be made on the fly,” he said. “You just have no idea how the yellows are going to fall so you go in with the plan to try and run up front all day long. If you can do that, then 1) you’re in a position to win, and 2) it’s normally safer there, there’s less chance for bad things to happen.

Andretti admits his heart sank when when Hunter-Reay and Bell collided on pitlane, not far into the second half of the race.

“I couldn’t believe it,” he said. “I thought it was all over, I really did. Because at that point our next best car was 20th or something, so that was a real low moment. But just goes to show you should never give up. We knew we had three good cars left in the race and two of them came home 1-2. Pretty darn good.”

Rossi and Munoz finished first and second barely four seconds apart, with Rossi using extreme fuel-save tactics that saw his engine cough and die as he exited Turn 2 on the final lap, so that he coasted across the finish line at barely more than 130mph. Munoz, on the other hand, had taken a splash-’n’-dash and then charged, but just came up short.

“I think Bryan [Herta] saw our other car was going one way on tactics, and so he went the other,” Andretti replied. “That is the beauty of having multiple cars – multiple fast cars – and it ended up working out perfectly.”

Andretti says he hopes that NAPA Auto Parts, which came on board Rossi’s #98 car as primary sponsor in the build up to the ‘500’, would be encouraged to return.

“Obviously NAPA were really happy with the result and the return that they got,” he said, “and I know there are a lot of people within the company who really want to stay involved. We’ll see.

“This event being held in January is proof just how much a sponsor benefits from being involved with the winning car. It’s eight months of coverage. When you win Indy, the publicity doesn’t just stop after Memorial Day Weekend. You keep yourself in the news for the rest of the year and that definitely does not hurt when it comes to attracting new sponsors.”

Rossi told Motorsport.com that, despite his rookie status at Indy last year, and despite his pre-2016 focus on European racing, the publicity surrounding his triumph had helped him understand the significance of his achievement.

“I wouldn’t say this Baby Borg moment is greater than what the last seven months have been,” he remarked. “Since that day, I’ve only been gaining in appreciation of the magnitude of what we achieved . So I don’t want to say this is bigger than the other things that have occurred.

“What I would say is that this Baby Borg is a bit more personal for me because it’s something that I get to take home and can enjoy on my time. Whereas my likeness being unveiled on the big Borg-Warner Trophy was more about me becoming a part of motorsport history – very cool in its own right, but in a different way.”

Rossi said despite the adulation lingering, he and the team were entirely focused on the 2017 season.

“To be honest, I’ve been thinking about 2017 since the Monday morning after Sonoma [last season’s finale]. It’s no secret that no one on the team was happy with how the rest of 2016 went and we’ve all been making efforts to change that for this season.

“That’s why it was huge for me to get a new deal together with the team so soon into the off-season. It provided the team with continuity and direction, so we could focus purely on performance rather than all the other things that go along with off-season uncertainty. I just hope that it means we’ve dotted our Is and crossed our Ts so we can win more than one race next year.”

Rossi said he hoped that should he win another Indy 500, it will be less nerve-wracking and more straightforward than last year’s event.

“We were quick,” he remarked of a race in which he set fastest lap. “We won the race in a very strange way, but [without two slow pitstops that twice dropped him outside the Top 20] we had just as good an opportunity to win it on pure pace. So going into this year, I’d say the odds of winning the “500” again are just as good, but I’ll go back hoping for a much more straightforward Sunday and actually showing the performance that we had in the previous two weeks. I’ll have a lot more knowledge and understanding and use that to my advantage. I’d like to start the race in the top five and remain there, and not fall all the way back to 30th, and not spend half an hour trying to figure out how to get the car to the finish on X amount of fuel. That’s one way to win it, but for sure I wouldn’t want to do it again that way…” [Read Rossi’s full recollection here ]

Herta: Victory was due to Rossi being a ‘high-functioning’ driver

Herta famously won 2011’s 100th anniversary Indy 500, with Dan Wheldon at the wheel, while his BHA team was partnered with Schmidt Peterson Motorsport. Five years later, in partnership with Andretti Autosport, his squad won the 100th running. However, he refrained from drawing comparisons between winning with a seasoned IndyCar veteran and former 500 winner like Wheldon, and winning with a rookie, such as Rossi.

“It’s great, but they were won in very different ways and both were amazing in very different ways,” Herta told Motorsport.com. “Something I haven’t seen picked up on, but there was someone else who was common to both those victories and that’s Rob Edwards. He was team manager for Schmidt in 2011, and now he’s team manager at Andretti Autosport. He’s a guy who was absolutely integral to both those successes.”

Talking about his decision to put Rossi on an alternate strategy – and a severe one – compared with his opposition in last May’s Indy 500, Herta said only, “It’s a very thin line between genius and idiot!”

However, he said his late pre-2016 season decision to partner with Andretti had included thoughts of his team’s Indy 500 prospects.

“You try and win every single race, but I knew how good Michael’s team traditionally performed at the Speedway, so I was definitely excited about that prospect. I wouldn’t say that we expected to win, but we definitely went out there trying to win, trying to be in the mix. To be honest, I think that’s why we did what we did tactically; rather than take a safe top-six finish, we tried to win it.

“We already had discovered that Alex is a very high-functioning driver. What I mean by that, is that he’s able to drive quickly while retaining that mental capacity to think and adapt to what’s going on. That’s hard for some drivers. His ability to go quick while figuring out fuel mileage and ways to save fuel is what gave us the belief that he could sort those things out, and what made it work.

“Most rookies when they come to IndyCar have at least done ovals in Indy Lights. Alex was a true, true rookie so what he was able to achieve and how he was able to adapt is really quite phenomenal.”