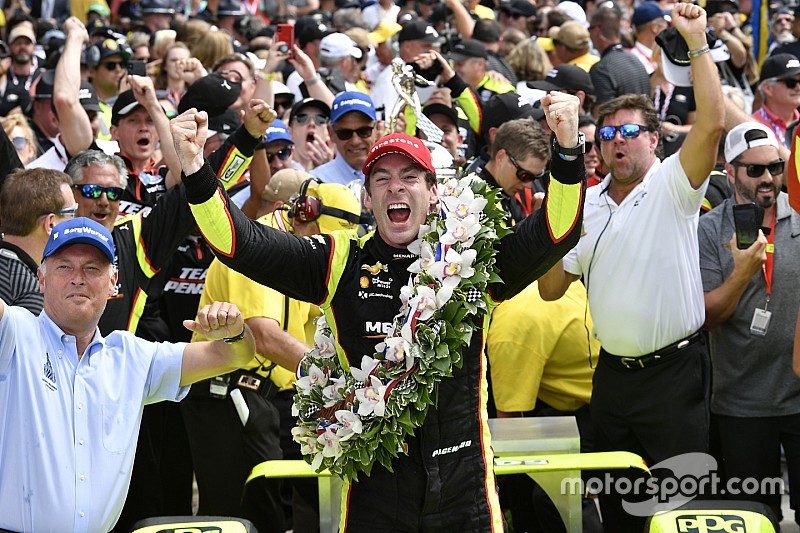 Team Penske-Chevrolet’s Simon Pagenaud won a titanic scrap with the Andretti Autosport-Honda of Alexander Rossi over the final 14 laps to win the 103rd Running of the Indianapolis 500, and earn a place on the Borg-Warner Trophy.

Pagenaud who started from pole, led 116 laps and following a late-race restart after a five-car shunt, he passed leader Rossi, who twice retaliated successfully, but the Penske driver powered past on the run down to Turn 3 on the penultimate lap and thereafter held his rival at bay.

Takuma Sato made decisive moves past Ed Carpenter and Josef Newgarden in the closing stages to claim third, while Carpenter slipped behind 2018 winner Will Power who overcame a penalty to claim fifth place.

As well as eliminating Chip Ganassi Racing’s Felix Rosenqvist, that incident also caused damage to the Swede’s teammate Scott Dixon, who had to pit for repairs and trailed home 17th.

Polesitter Simon Pagenaud of Team Penske-Chevrolet made a strong start as Ed Carpenter tucked in behind and Will Power went around the outside of three cars to move from sixth and into third ahead of other ECR’s Spencer Pigot, Josef Newgarden (Penske), Colton Herta (Harding Steinbrenner Racing-Honda), Alexander Rossi (Andretti Autosport), Ed Jones (ECR), Sebastien Bourdais (Dale Coyne Racing with Vasser-Sullivan) and Conor Daly (Andretti) as the Top 10. The big loser was Marco Andretti who fell from 14th.

Pigot had tried to repass Power for third, but instead the pair came under threat from Newgarden. However, Power hung on around the outside of Newgarden, which cost them time and Newgarden was passed by Pigot once more.

Colton Herta was almost immediately in trouble, and he would grind to a halt at Turn 3 on Lap 4 with the car stuck in gear. When the pits opened as a result of the caution, Andretti, Sage Karam (Dreyer & Reinbold Racing) and Felix Rosenqvist (Chip Ganassi Racing) would all pit.

On the restart on Lap 10, Power charged around Carpenter into second but the local boy wouldn’t let the two Penskes go. Behind, Bourdais and Rossi passed Jones to grab sixth and seventh, and on Lap 14, Rossi was into sixth and had the fastest lap so far, in the 221mph zone.

Rossi could gain on the understeering Newgarden out of Turn 2, but even in the draft down the back straight, he couldn’t get close enough to even think of making a pass.

Paying the price of running into “solid” air, Pagenaud was the first who needed to pit, on Lap 32, and such was the closeness of the pack at this stage he emerged last, in 32nd. Newgarden pitted two laps later and got two turns of front wing. Power pitted from the lead on Lap 35 and took half a turn of front wing, Carpenter stopped on Lap 36 and suddenly all the dominoes started to fall.

Castroneves made contact with James Davison’s car on pitlane, as the DCR with Byrd and Belardi suddenly slowed as he missed his pit and and he was clouted by the Brazilian’s front wing. Castroneves would receive a drive-thru penalty.

Off-strategy Rosenqvist pitted on Lap 42, leaving Pagenaud back in the lead, now 2.5sec ahead of Power who had one second over Carpenter.

In fourth having stopped slightly earlier than all but Pagenaud was Newgarden, now leading Bourdais and Rossi, with Pigot and Jones in seventh and eighth, Daly ninth and Ericsson 10th, ahead of Dixon and Kanaan. Rossi would demote Bourdais to sixth just before quarter-distance.

DragonSpeed’s Ben Hanley slowly came into the pits with a right halfshaft issue, a disappointing end to a very impressive Month of May from the team who had taken part in just two other IndyCar races.

On Lap 62, Carpenter drafted past Power along the back straight to take second into Turn 3. That same lap, Oriol Servia was the first of the on-strategy cars to stop, but then Pagenaud stopped on Lap 64 with a 2sec lead, with Power stopping on Lap 68. But Power slid into his pitbox and ran long, striking one of his crew members, elongating his regular stop from eight to 12 seconds. He would rejoin in eighth, but Race Control ordered him to take the restart from the rear of the field.

Dixon had cycled to the front and had saved so much fuel that he didn’t need to stop until Lap 72.

Sadly the fairytale of Juncos Racing ended on Lap 73, when Kyle Kaiser spun on the short chute between Turns 3 and 4 and struck the outside wall. When pitlane opened, Sato, Hinchcliffe and Rosenqvist pitted.

The restart saw Pagenaud, Carpenter, Newgarden, Rossi, Bourdais as the order, and although Pagenaud burst away initially, Carpenter regained the lost ground within a lap and a half as Pagenaud was ordered by his team to try and save a couple of laps of fuel. However, Carpenter didn’t want to go around him, and this stasis artificially condensed the field, with Newgarden in third leading Rossi, Bourdais, Pigot, Daly, Dixon, Ericsson, Rahal, Hunter-Reay and Ferrucci.

Lap 99 saw Pagenaud stop for a third time, and Carpenter stopped on Lap 101, and that triggered the field into doing the same, Newgarden taking two more turns of front wing – six since the start of the race – while the leading Hondas went a little longer. Rossi went until Lap 106 – but the stop was a little long and he lost a position to Bourdais as he rejoined – while Dixon managed to extend it to Lap 111.

Rossi had made up for his lost time in the pits and rocketed past Bourdais, Newgarden and Carpenter, and started filling Pagenaud’s mirrors from Lap 111, this battle now for the lead since the off-sequence cars pitted. Behind them, Carpenter led Newgarden, Bourdais, Daly, Dixon, Ericsson, Ferrucci, Hunter-Reay, Rahal and Rosenqvist.

Pagenaud turned his fastest lap of 223.918 on Lap 128 just before he pulled in for his fourth pitstop, with Carpenter stopping on 133, Newgarden on 135. Rossi pitted on 136 but had a disastrous stop when his fuel nozzle wouldn’t slot home and the fuel took forever. What saved his race from turning to ashes was a caution flag. Ericsson, running in a fine eighth place, spun as he tried to slow coming into the pitlane and made contact with his nose on the pitwall. Out came the caution as the Arrow SPM car needed retrieval from its broadside position across pitlane.

Those who hadn’t stopped – including Dixon, Ferrucci, Rosenqvist, Kanaan, Veach, Hinchcliffe and Jones – were now in trouble as of course the field bunched up before the pits were re-opened. Kanaan and Leist of AJ Foyt Racing were moved to the back for the restart for taking service in a closed pit.

The restart would see Pagenaud leading Carpenter, Newgarden, Bourdais, Rossi, Daly, Hunter-Reay, Rahal, Dixon and Rosenqvist, and it would come on Lap 148.

Rossi lost momentum on the restart, but he had to regain ground using the grass down the backstraight to hang onto sixth. At the front, Newgarden got around Carpenter and on Lap 151, the IndyCar points leader went down the inside of teammate Pagenaud to grab the lead. A furious Rossi struggled to pass the lapped Oriol Servia and gave him some interesting hand gestures down the front straight as he finally got a run on him.

On Lap 158, Rossi moved into fifth with a pass on Bourdais into Turn 1 and he set his sights on temporary teammate Daly, having the best Indy 500 of his career.

Newgarden, having reached the lead, was now down to 217mph laps but Pagenaud still needed to save fuel to make it on only one more stop and so he tucked in behind him. Carpenter stayed in third, but behind him Rossi was into fourth past Daly.

Pagenaud passed Newgarden to take the lead for a couple of turns before pitting on Lap 168. That triggered the sequence of everyone pitting and Rossi’s earlier stop allowed him to blow past Newgarden and jump Carpenter.

Rossi had just taken Pagenaud for second – although the virtual lead, since Pigot had yet to make his fifth stop – lead down the back straight on Lap 178, when out came the caution. Rahal was trying to pass Bourdais for sixth down the back straight, when Bourdais squeezed the RLLR car toward the grass and Rahal spun and tapped Bourdais. The subsequent crash, which caused a red flag, also eliminated Veach, Rosenqvist, and poor Charlie Kimball who had been running in the top dozen. Ferrucci spectacularly – and Hunter-Reay, Harvey and Hinchcliffe more moderately – threaded the needle and got through the smoke and carnage unscathed. Dixon was less fortunate, climbing over the front-wing of Kimball’s stricken Carlin car and apparently damaging his own.

The cars returned to pitlane to wait out the red flag which took 18 minutes. Pigot pitted under a closed pits (under yellow) as he was so desperately short of fuel. The lapped runners were given the wavearound, Dixon got a new front wing under yellow, so the restart would see Rossi, Pagenaud, Carpenter, Newgarden, Sato (having benefited from an earlier wavearound), Daly, Ferrucci, Hunter-Reay, Power, Hinchcliffe and Dixon as the Top 11.

Pagenaud blasted past Rossi on the restart around the outside of Turn 1, while Power moved straight up to sixth, and Sato moved past Carpenter after some breathless side-by-side moments.

Rossi got back past Pagenaud next time by, but Pagenaud returned the favor, as Sato moved around Newgarden to take third.

Pagenaud held Rossi at bay, while Power got around Carpenter for fifth on Lap 196.

Rossi finally nailed the outside pass on Pagenaud on Lap 198 to take the lead, but on Lap 199 down the back straight, Pagenaud went around the outside of Rossi and then held on to rebuff the American’s best efforts over the final lap to cross the yard of bricks 0.2086sec ahead of the Andretti Autosport driver.

Penske confirms Indy 500 winner Pagenaud will stay on in 2020