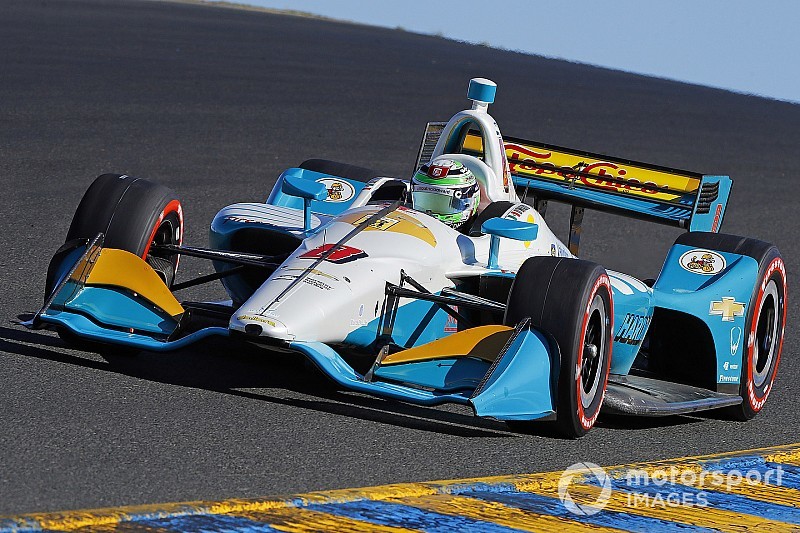 Called up by Harding Racing-Chevrolet for the IndyCar finale at Sonoma two weeks after clinching the feeder series crown, 19-year-old Mexican O'Ward put the team into the Firestone Fast Six pole shootout for the first time and qualified fifth. Despite struggling with tire management in the race, he still finished ninth.

New talent has been a theme of IndyCar in recent years, with Josef Newgarden winning the 2017 championship in his first season at Penske and ex-Formula 1 driver Alexander Rossi emerging as Dixon's closest title rival this year, and the newly crowned five-time champion sees O'Ward's debut as further evidence of this.

"It is a sport of evolution, right? We're in the mix of that," said Dixon, who made his Indy car debut at the age of 20 and won his third-ever race. "I'm 38. I'm not the young buck I was when I came into the sport!

"The evolution is happening. There are these young people coming through, and we saw that in full force with O'Ward. To come off his Indy Lights championship, to smack it right into the Firestone Fast Six, when all of us have been competing in the car all year and know it well, shows the youth and talent coming through.

O'Ward felt his Sonoma performance was vindication for Lights, which struggled with only seven fulltime entries in 2018.

"I feel really good because a lot of people started complaining about us this year," he said. "'Oh, there's seven cars, blah, blah, blah'. It doesn't matter, it only takes two cars to have a competition. I think we proved that the level was good.

"I'm really happy that I could show some speed [this weekend] because the Road to Indy is very competitive and it really helped me prepare for IndyCar.”

Harding, which was boosted last weekend by Andretti Autosport engineers, data and equipment, qualified in the top six for the first time, while O’Ward’s Indy Lights title rival Colton Herta, in a second Harding car, came only a couple of tenths shy of reaching Q2 (top 12).

O’Ward admitted to "begging" Harding to let him pit as he wore the softer red tires too quickly in the first stint, and fell down the order, but felt he learned quickly, not only about the compounds but also about racecraft with the “big cars”.

"It's really hard when you haven't really done a stint on tires that you don't really know," said O'Ward. "The tires didn't last with me so long. I just got shuffled back.

"After my first pitstop, I stayed for a whole stint behind [Tony] Kanaan. I could not pass him. Then after the second pitstop, I just decided to send it. Once I got by him, it was a lot easier for me to know how to get around other people.

"When I came here my optimistic expectation was a top-10 finish. I achieved it. The more races I do, I'll start to get the hang of how things are. I would expect myself to be way stronger the next time."

O’Ward and Herta are expected to be confirmed in a two-car Harding Racing entry for 2019, with George Steinbrenner III – who has backed Herta this year – joining forces with the second-year team.

Hunter-Reay still thinking about wins that got away