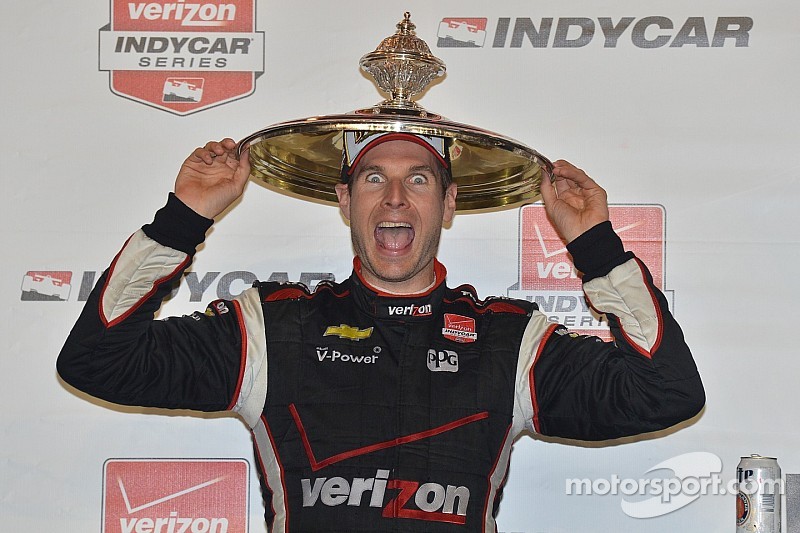 FONTANA, Calif.—Will Power drove a cool and calculating 500 miles at the Auto Club Speedway to win his first Verizon IndyCar World Championship on Saturday night by finishinig ninth in the MAVTV 500. Tony Kanaan won the 250-lap fast-paced race for his first victory of the season, the 17th of his career and first with Target Chip Ganassi Racing.

For Power, the championship put three frustrating years and two nervous weeks to rest. He’d been runner-up for three straight seasons from 2010 to 2012, a period when he dominated on road and street courses and fell short on ovals. The 33-year-old Australian was fourth in the championship last year, but won the race at Fontana in what was a critical confidence boost.

Power started 21st and drove patiently and steadily through the field. He came out in fifth following the race’s only caution, from laps 175 to 186, and drove into the lead three laps later. Power had his only competition for the IndyCar title, Team Penske teammate Helio Castroneves, behind him and the championship in sight.

“It was one of the hardest races I ever drove,” Power said. “It went on and on and I started making up positions. The car wasn’t good. When I took the lead, I thought ‘We have a chance’ to win the championship. When Helio got the drive through penalty, I thought, ‘We’ve got it.’”

Castroneves was penalized with 30 laps remaining for a pit-lane entrance penalty. Drivers had to enter the pits from turn three and stay inside the white line and Castroneves drifted above it.

Power’s Chevrolet-powered Dallara lost some of its good handling following the pit stop under caution and he began fading from the front once he knew Castroneves had gone a lap down. He drove carefully to the checkered flag.

“It’s surreal,” Power said. “My hands are numb on the from holding [the wheel] too tight. The last 14 days have been the worst of my life. I’ve been stressing, not sleeping. I can’t believe I’m champion.”

First for Penske since 2006

“Will, obviously, did a terrific job,” Penske said. “We couldn’t ask for anything more. We got what we wanted, the championship. Will has been the best road racer in the series. When I saw him operate at Milwaukee this year, he showed me what he’s got (on ovals).

“He’s got the monkey off his back now.”

Power led 229 of 250 laps at the 1-mile Milwaukee oval for his third and final victory of the season. He also won on the street courses at St. Petersburg, Fla., and Belle Isle in Detroit.

Scott Dixon finished second and Ed Carpenter was third. Simon Pagenaud began the race with an outside chance to overtake Power and Castroneves, but he struggled with the handling on his Dallara-Honda from the start and finished 20th, seven laps down.

Kanaan started seventh in the Dallara-Chevy and led the final 54 laps. He finished 3.6 seconds in front of Dixon.

Kanaan: A 'lot of emotion'

“Chip (owner Ganassi) gave me the opportunity to drive for him and what an awesome feeling it is to win,” Kanaan said. “There was a lot of emotion in the car. The No. 10 car has a lot of history. I’m dedicating his win to Dario (Franchitti), who would still be driving it if he hadn’t retired.”

Kanaan had three third-place finishes and a second place in the six races leading up to the MAVTF 500.

“We’ve had some close calls,” Kanaan said. “It shows the potential for next year. We’ve turned the team around.”

Dixon also drove consistently at the front and took advantage of mistakes by Carpenter, Castroneves and Hunter-Reay to take second. The three-time IndyCar champion from New Zealand led only five laps.

Carpenter, the only owner/driver in the series, climbed from 14th on the grid to take the lead on lap 100. He dropped into second behind Hunter-Reay before pitting six laps later and was penalized for exceeding the 60 miles per hour speed limit with a drive-through He emerged 13th, but managed to stay on the lead lap. Carpenter won at Fontana in 2012 and was second a year ago.

Hunter-Reay charged into the lead for 21 laps, from 120 to 140, before pitting and was running hard in the top five when he spun exiting turn four. His Dallara-Honda went through the grass, but was not damaged. Hunter-Reay finished one lap down in 16th.

Juan Pablo Montoya led the most laps, 85, but was never able to get back to the lead after being passed by Hunter-Reay. The Colombian finished fourth. Canadian James Hinchcliffe bounced back from a pit-lane speeding violation with about 100 laps to go to finish fifth.

Power will receive $1 million for winning the championship. He would likely tell you finally winning a title was priceless.

The race, which ended at 12:53 a.m. ET, was on a record pace until the lone caution flag, for a one-car spin by Ryan Hunter-Reay. Chevrolet had already clinched its third engine manufacturer's championship, and ended up with the first four finishers at Fontana, and the top four finshers in the championship.