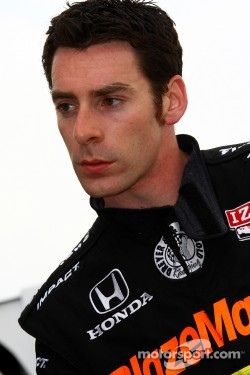 Pagenaud, 27, brings a wealth of experience driving several types of high-horsepower cars in his career. In 2011 alone, he was a factory Honda driver in the 12 Hours of Sebring and a factory Peugeot driver in the 24 Hours of Le Mans 24, finishing second in both events. In addition to the sports car racing he did, Pagenaud also raced V8 Supercars, Rally cars and had three IndyCar Series starts in 2011 filling in for injured drivers Ana Beatriz (Barber Motorsports Park), Justin Wilson (Mid-Ohio Sports Car Course) and Simona de Silvestro (Infineon Raceway).

“I am delighted to be joining the IZOD Indy Car Series full-time with Sam Schmidt Motorsports and Honda,” Pagenaud said. “The series represents the most competitive racing in the world right now, and I am really looking forward to the challenge of racing in a single-seater again. I have to thank Sam Schmidt Motorsports for giving me the opportunity and to continue with the Honda engineers at HPD. It is the best situation I could wish for.”

Like many racers, Pagenaud started his career racing karts near his home in Montmorillon, France. He moved steadily through karts and formula cars in Europe from 1994 to 2005. At the end of that run, he made the decision to steer his career path through the United States. In 2006, he made the move to Indianapolis and his career took off.

“America has been a lucky charm to me, really,” Pagenaud said. “The start of it was 2006, when I won the Champ Car Atlantic Championship with Walker Racing, which allowed me to enter the Champ Car Series in 2007.”

His rookie year in Champ Car was also his last as the series dissolved when Indy car racing was unified under the Indy Racing League banner. Pagenaud finished eighth in his rookie season. Though he was out of an Indy car seat, his stock quickly rose when he became a factory driver for Honda Performance Development.

“We are very fortunate to land a driver of Simon’s caliber for the 2012 IZOD IndyCar Series season,” Schmidt said. “As all the teams work to develop the new cars and engines, his diverse experience will be invaluable to us. Simon has a strong relationship with Honda and its engineers, which is also a huge asset. This is a big day for Sam Schmidt Motorsports.”

The 2012 season will be a reunion for Pagenaud and members of the SSM IndyCar team. Edwards, the team manager, held that same position with Walker Racing when that team won the 2006 Atlantic championship with Pagenaud. In addition to Edwards, several current SSM crew members worked with Pagenaud at Walker Racing as well.

“I am thrilled to be renewing my relationship with Simon after working together in 2006 when he won the Atlantic championship and then graduated to Champ Car in 2007,” Edwards said. “He has continued to develop since then and is clearly deserving of a full-time ride in the IZOD IndyCar Series. We are excited that he will have that opportunity with Sam Schmidt Motorsports in 2012 and look forward to a successful rookie season with him.”

The SSM IndyCar team begins its third season in 2012, though it will be only the second year of ownership by Schmidt. The successful Firestone Indy Lights team owner purchased the assets of FAZZT Race Team, with team manager Edwards, in the spring of 2011 to create his own IndyCar operation. Edwards had built FAZZT around a core of veteran crew members and engineers, and the experience paid off under Schmidt’s ownership. In only its second season, the team won the prestigious Indianapolis 500-Mile Race pole position in 2011. In addition, Schmidt’s Indy Lights team won its fifth series championship with driver Josef Newgarden and its 46th overall race win.

“I know 2012 will be a big challenge with the new Dallara chassis and being on a new team but, quite frankly, that is what is so interesting,” Pagenaud said. “To fulfill a lifelong dream to race an Indy car and to compete in the Indianapolis 500 is a special time in my life. I can't wait for the start of the season in St Petersburg. I also want to especially thank Sam Schmidt for giving me the opportunity to drive for his team and for my friends at HPD.”

Pagenaud’s car number and sponsorship package will be announced at a later date.

Will Baltimore host an event in 2012?