Pappas said the cars’ behavior once out of control and the damage caused by the impacts had been – with one exception – as intended.

“They didn’t go upside down, so that’s a very positive result,” he told Motorsport.com. “They all climbed the wall and they try to get upside down but they didn’t and so we’re pleased with the results of that.”

Asked if that was a result of the holes in the floor in front of the sidepod openings, Pappas said, “I’m sure that’s part of the explanation. You’ve got a big surface under there so it could act like a Frisbee, so reducing the pressure reduces the lift.”

He also said he saw no reason for reintroduction of the beam wing, added to the previous generation of cars, that featured pop-up flaps for when the car was running backward at high-speed – similar to the top-surface flaps seen on NASCAR cars – to slow the cars and try keep them ‘on the deck.’

“They would disappear the first moment the cars hit the wall backward anyway,” he said. “They never were structural – so no, we don’t want to go back that route. I think what we’ve got is performing the way we expected it to do, after simulations, analyses and design work.

“Again we’re really happy with how the cars withstood impacts. The structure that we added to the front of the underwings has held up really well when you look at the crashed cars. It has done what it needed to do.”

Regarding the right-rear wheel assembly that got torn off Rosenqvist’s car, Pappas commented: “It’s going to tear up some stuff, hitting a wall at 220mph, so you’ve got to hope for the best at that point. But what we commit to is doing all the engineering we can to try and get the best results across the widest range of impact angles.”

The one reservation Pappas had was over the nosecones, which are tethered, but which in the case of O’Ward and Kaiser still got ripped off.

“That has us a little concerned,” admitted Pappas, “we hadn’t seen that before because they are tethered. So the Dallara engineers are looking at that closer. The way those two cars hit, it completely destroyed the structure of the nosecone, so we’re looking at the whole assembly to see if there’s something we can do.

“The nose acts like the rear attenuator – it absorbs up to a certain G-load and then crush at a certain level.” 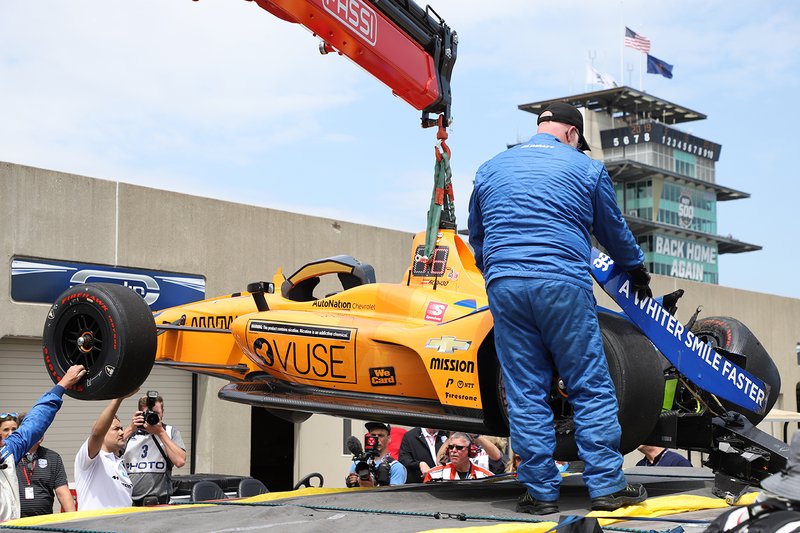 The crashed car of Fernando Alonso