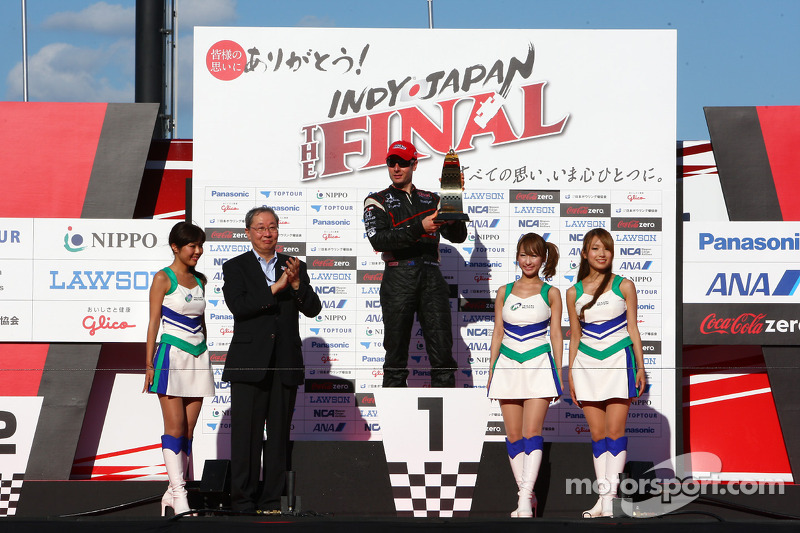 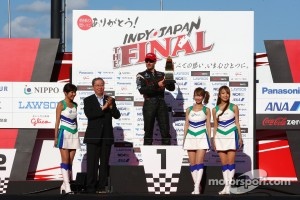 1. Power honored to win Andretti Trophy again: It was Respect for the Aged Day in Japan - a national holiday - and Will Power did his part.

"Mario (Andretti) is the ultimate driver to me," Power said of the legendary Indy car driver who's 41 years his senior. "Even now that he's older, he still gets in a race car and wrings its neck. He just amazes me."

Andretti, who relishes his role as the driver of the "Fast Seat in Sports" two-seater a select IZOD IndyCar Series races, would appreciate the compliment from the driver who for the second consecutive year earned the road/street course trophy named in his honor. Andretti amassed 52 open-wheel racing victories under USAC (33) and CART (19) sanction, including the 1969 Indianapolis 500. Among other statistical accolades is a streak of 16 seasons with at least one victory.

The Mario Andretti Road Trophy is award to the driver whose point production is highest on the 10 road/street courses during the season. Power, driver of the No. 12 Verizon Team Penske car, wrapped up the title in the Indy Japan with a runner-up finish.

"To win an award with his name on it is a real honor," Power continued. "Now two years in a row I'm very happy about it. I think in order to win the championship you almost have to win it."

Of Power's six victories this season, five have been on streets/roads, including back-to-back wins at Infineon and Baltimore to pump up his overall championship point total. Entering the Indy Japan on the 2.983-mile, 14-turn road course five points arrears of Dario Franchitti, he emerged with an 11-point advantage heading into the final two races of the season (on the Kentucky Speedway and Las Vegas Motor Speedway ovals).

Additionally, 19 of Power's road/street course points have been courtesy of bonuses for seven pole starts (seven points) and leading the most laps in six of the 10 (12 points) races.

"It's great to win it two years in a row," he said. "It was a good weekend all around to wrap that up and also gain the points lead. Not that I'm thinking about points. All I'm thinking about is beating the 10 car every race we got left."

2. Kentucky test sets stage for final two races: The driver who has won the race at Kentucky Speedway has gone on to win the IZOD IndyCar Series championship three times (Buddy Lazier, 2000; Sam Hornish Jr., 2006; Scott Dixon, 2008) in the past decade.

By all accounts then, Will Power and Dario Franchitti should make the most of a scheduled eight-hour test Sept. 23 at the 1.5-mile oval. Neither has won at the track.

The title contenders, who are separated by 11 points heading into the Oct. 2 race, are among the 11 drivers who will participate in the testing, which will welcome spectators at the Administration building above Turn 3. Of course, tickets to the race weekend will be available for purchase.

"Ovals, that's what I enjoy the most racing, mile-and-a-half racing," Power said after claiming second place and the Mario Andretti Road Trophy in the Indy Japan on Sept. 18. "Chicagoland last year, Texas this year, even Kentucky last year we were really strong, we just didn't end up with the result. I'm pretty focused on that this year."

Power earned his first oval victory at the 1.5-mile, high-banked Texas Motor Speedway in June. Last September at Kentucky Speedway, Power started from the front row in the No. 12 Verizon Team Penske car and finished eighth. Franchitti advanced six positions relative to his starting positions in the No. 10 Dixie entry for Target Chip Ganassi Racing and secured fifth place to slice Power's advantage in the championship from 23 to 17 points with two oval races remaining.

This year, the order is the same and the gap is 11 points.

"It was a good day for us points-wise in the championship but I'm really not worried about points right now," Power said before being sprayed with champagne in Victory Circle at Twin Ring Motegi. "I just need to keep finishing in front of the 10 car the rest of the way and we'll be fine. We'll keep chipping away like we have been."

There have been nine different winners in the 11 IZOD IndyCar Series races at Kentucky Speedway, with Power's Team Penske teammates, Helio Castroneves and Ryan Briscoe, winning the past two years. In 2010, there were 11 lead changes among seven drivers.

Dillon Battistini, who has four Firestone Indy Lights victories in 19 starts over three seasons, will take his IZOD IndyCar Series oval rookie test in the No. 34 Conquest Racing car.

Mann, who has been medically cleared to drive following a practice crash at New Hampshire Motor Speedway in August, will seek to make her second series start. Cunningham, the '05 Firestone Indy Lights champion, last competed in the Firestone Twin 275s in June at Texas Motor Speedway.

3. Inside the numbers - Motegi: Some numbers to note from the Indy Japan: The Final at Twin Ring Motegi, the 15th event of the 2011 IZOD IndyCar Series season.

6 - Finishing position for Sebastien Bourdais, who finished sixth for the fourth time in the last six races.

7 - Consecutive races led by Will Power, who led the only one lap not led by Scott Dixon at Motegi.

12 - Positions gained by JR Hildebrand, Danica Patrick and Simona De Silvestro, who finished seventh, 11th and 14, respectively, most of any driver in the field.

49 - Consecutive races running at the finish for Danica Patrick, extending her series record.

4. Tagliani helps team heal with fourth-place finish: It was a common theme among IZOD IndyCar Series drivers that racing in Japan was more than just a race. They were there to provide entertainment, escape and support for the people of Japan, especially those from the region just north of the Twin Ring Motegi motorsports facility, who have endured much since the devastating earthquake and tsunami in March.

After starting 15th, the oldest regular driver in the IZOD IndyCar Series drove an inspiring race to finish fourth in the Indy Japan 300 at the Twin Ring Motegi in Tochigi, Japan. The result matched Tagliani's fourth-place finish in June at Texas, the highest for an SSM entry in the IndyCar series this year.

"It was a good race for the Sam Schmidt Bowers and Wilkins team and it was a great team effort," said Tagliani. "We lost a team member this week, Chris Griffis, team manager of the Indy Lights team. He was very close to Sam and ran the operation for Sam for everything before the IndyCar team was started. We know how close Sam and Chris were and how devastated Sam is, so it's great that we could give him a finish like this to be excited about."

5. Boyd suggested for prestigious award: USF2000 driver Wayne Boyd could find himself among the nominees for the BRDC McLaren Autosport Award in 2011 with the assistance of race fans.

Boyd, a multiple race-winner in USF2000 in 2011, has been suggested as one of the nominees for the prize, which is given to a top young-driver from the United Kingdom.

"Need everyone to do me a massive favor," Boyd wrote on Facebook. "Autosport have suggested me as a possible nominee for the BRDC McLaren Autosport Award this year and I need your votes!!! Email my name to autosport.editorial@haymarket.com with the subject "nominations". Please take 2mins of your time, would be greatly appreciated and get everyone else you know to do it to, thanks."

Winning the McLaren Autosport BRDC Awards can be the difference between success and failure for an aspiring British racing driver.

An expert panel selects just six potential stars to take part in a two-day shoot-out in a selection of single-seater, touring and sports cars. The winner is awarded a test drive in a McLaren Formula One car, a £50,000 cash prize, and membership of the British Racing Drivers' Club.