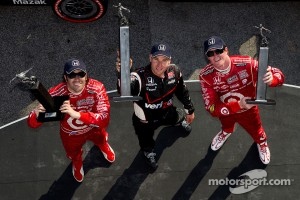 1. Title contenders not feeling championship pressure at Kentucky: Will Power is in a familiar spot with two IZOD IndyCar Series races remaining. What's different is the championship front-runner's mind-set, which developed through the down-to-the-wire chase in 2010 to now be consistent with the two other title contenders.

Power is focused on the body of work of Verizon Team Penske - the qualifying and race set-ups, error-free pit stops, race management and, of course, the results - and not the competition.

Entering the penultimate race of the 2010 season, the Verizon Team Penske driver led Dario Franchitti of Target Chip Ganassi Racing by 17 points. The gap was whittled to 12 points with one to go, and Power fell five points shy of his first title following contact in the season finale that netted 25th place on the Homestead-Miami Speedway oval.

This year it's an 11-point margin with races on the 1.5-mile Kentucky Speedway (Oct. 2) and Las Vegas Motor Speedway (Oct. 16) on deck. Franchitti's teammate, two-time series champion Scott Dixon, is still in the hunt 59 points arrears. Every IZOD IndyCar Series championship has been decided in the finale since 2006.

"The person who has the most pressure on them is the person who puts it on themselves," said Power, who has one oval victory (Texas2 in June) among the 15 in his Indy car career. "It's taxing if you think about it, but you just think about the job at hand. Someone had to tell me I'm in the lead. In the last five races, I haven't thought about points at all. I've just gone out and done my job as best I possibly could.

"Everything else is out of my control. I can't control what other people do and I can't control what happens during a race with other competitors or Race Control. I reckon you have to have gone through it one or two times to understand how you need to be mentally. Last year was definitely that. It's definitely different this year - a lot thought on what I'm doing and not on what other people are doing.

"To me, it's just another two races. The key is to finish ahead of the 10 car in both of them. It's as simple as that."

Not so simple in practice, obviously, with Franchitti accumulating half of his 30 Indy car victories (15) on ovals. There's also the wild card of 29 cars entered for the Kentucky Indy 300 and more than 30 expected to compete in the IZOD INDYCAR World Championships Presented by Honda at Las Vegas Motor Speedway. Last year at Kentucky, Power started on the front row and finished eighth.

"I feel very comfortable on mile-and-a-half ovals; it's definitely my strength on oval racing," Power continued. "If we can have the speed we had last year, considering what the tires are this year, I'd be very happy. I think last year we had the car to win. A little mistake on the out lap cost us probably six or seven positions. We have it; we just have to do the job."

"Pressure is part of this job," said Franchitti, who has oval victories at Texas and Milwaukee this season. "It's been part of this job I think since I sat in a go-kart when I was 10 years old, so I know what I have to do. I put the pressure on myself. The members of Team Target know what they have to do; they put the pressure on themselves as well.

"It's going to be an interesting couple of weeks. You're not racing one or two guys; you're racing the whole field, especially on the one-and-half-mile track. We'll do the same thing as we've done the last three or four years, which is ultimately go out and there do our best and see how it ends up."

"We've definitely let some of that lead go through my mistake last week, some bad luck and some other stuff but I think the difference with last year is the first time I was ahead of Will was at the end of the last race," Franchitti said. "He's now ahead of me. It's very doable so we'll see if we can get it done.

"In 2009, between Ryan Briscoe, Scott and myself, (the points lead) literally changed every week. So you learn to almost ignore these things and just focus on doing the job and putting the championship out of your mind. If you do a good job, you win the championship."

Dixon, whose approach also has been sharpened by championship battles, could be the spoiler. He won at Kentucky Speedway from the pole in 2008, and acknowledges having the least amount of pressure.

"Will has learned a lot, especially on the ovals, which is going to make this championship even tougher," said Dixon, who tested along with the other two title contenders at the track Sept. 23. "It's never easy, and you're never really out of it until you're mathematically out of it. When you have a bad day, you try to get the most points you can. Dario has had a very consistent season.

"For me, I've been in the last five championship battles all the way down to the bitter end and it's exciting. Maybe not for the driver, who would want to run away with it. Anything can take it away from you. It can be frustrating, but everybody knows it's racing and it's a team sport and everything has to be covered 100 percent. I think it's exciting."

2. Carpenter looks to improve on finish in Bluegrass State: When you've been the runner-up the past two years, there's nowhere to go but up. That's Ed Carpenter's outlook and motivation entering the Kentucky Indy 300 in the No. 67 Dollar General car for Sarah Fisher Racing.

The 30-year-old Indianapolis resident started from the pole in 2010 in a car that was a collaborative effort between Panther Racing and Vision Racing. He led 11 laps and watched Helio Castroneves climb the fence after 200 laps on the 1.5-mile Kentucky Speedway oval. In '09, Carpenter led 34 laps and advanced 12 positions relative to his starting spot to hand Vision Racing its highest finish.

"We had good cars here with Vision and last year pairing up what Vision had with some of the things Panther had just really worked well for all of us," said Carpenter, who tested on the oval Sept. 23. "The team executed and built a good car and we were able to get the pole."

Carpenter said there aren't any secrets to running up front and challenging for the victory, though there are some wild cards.

"The field is really tight so it comes down to the team being prepared and getting all the little things right," he said. "With some of these bigger fields (29 entries for the Oct. 2 race), you'll be racing with some guys who aren't used to racing these types of tracks and you can definitely get yourself in trouble. There are a lot of fast cars so it's not as easy to drive through the field as it might have been. This place is bumpy, it's always been bumpy, so that's a different element than some of the other mile and a halfs.

"You want to be up front and to do that it takes good execution from qualifying through the pit stops. You can't leave anything on the table."

Carpenter, who qualified eighth at Indianapolis and fifth at Texas in his first two starts of the season, will make his 10th start for Sarah Fisher Racing. Eleventh (three times) is his highest finish of the season.

"I've really enjoyed working with the team," he said. "We would have liked to have gotten better results; we shot ourselves in the foot a couple of times. I just want to make the most of these last two races and deliver some strong finishes for the team and Dollar General."

3. Cunningham hopes to emulate past success: Wade Cunningham returns to competition for the first time since Texas in June in the No. 17 Air Ride Pallet entry for AFS/Sam Schmidt Motorsports.

It will be Cunningham's first IZOD IndyCar Series start at Kentucky Speedway, where he won the Firestone Indy Lights race at Kentucky in 2009 and recorded podium finishes in 2005-07.

"We had four hours of testing on the 23rd," he said. "That knocked the rust off."

"The learning curve was just so steep and I had so much to learn," said Meira, who will be making his 130th start. "It was the first time I raced on an oval, the first time I did pit stops, my first time for wheel-to-wheel racing, so I had a lot to learn. We had 25 cars and I ended up finishing 13th, which was good and the reason is I learned a lot."

"This is an exciting new chapter of my career to join Jensen MotorSport, which has proven to be one of the top North American open-wheel racing teams," said Prados. "With a mix of road courses, street circuits, and ovals, Indy car racing provides a very interesting challenge for race engineers."

A native of Valencia Spain, Prados has a University degree in Mechanical Engineering, and extensive engineering experience with top teams in various European formula championships.

"With a new specification tire being introduced for the 2012 championship, this off-season will be a race of a different kind as teams work to optimize new set-ups," said Eric Jensen. "We expect the addition of the highly skilled engineer Raul Prados to pay big dividends for our competitiveness as Raul integrates his technical knowledge and processes from his GP2 experience including SIM programs and computer-based models."

Prados will begin working with the team at the season-finale at Las Vegas Motor Speedway. In addition to his duties in Firestone Indy Lights, he will work with Jensen MotorSport's stable of development drivers, iincluding American driver Ryan Tveter, during winter testing programs and the USF2000 winter series races in Florida at the Sebring and Palm Beach circuits in February 2012.