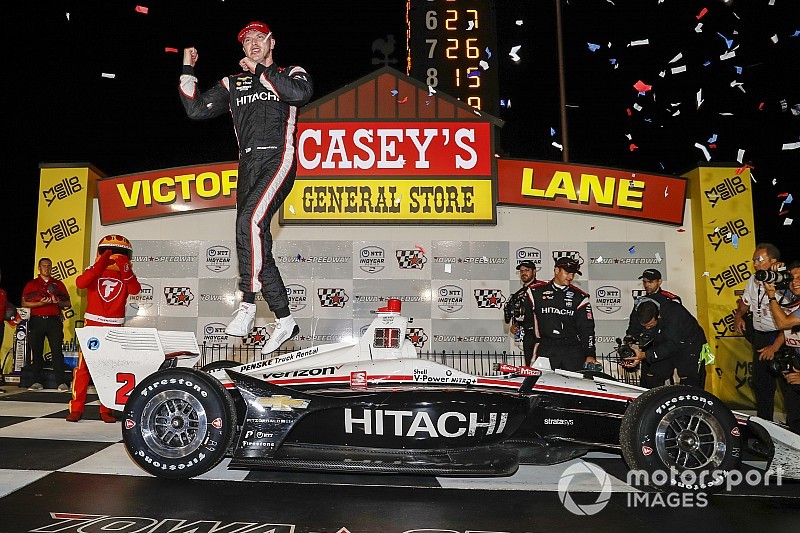 Team Penske-Chevrolet’s Josef Newgarden claimed his fourth win of the IndyCar season at Iowa to stretch his championship lead over Alexander Rossi, while Chip Ganassi Racing-Honda’s Scott Dixon charged from a lap down to claim second place after a late pitstop.

Will Power took the lead at the start with Takuma Sato also moving his Rahal Letterman Lanigan Racing-Honda around the outside of Simon Pagenaud by the end of the first racing lap with Josef Newgarden tucking into fourth ahead of prime title rival Rossi in the Andretti Autosport-Honda.

Santino Ferrucci moved the Dale Coyne Racing-Honda up into sixth from 12th on the grid, but on Lap 12 had to cede the spot to 2018 Iowa winner James Hinchcliffe in the Arrow Schmidt Peterson Motorports-Honda.

Pagenaud got back around Sato for second place on Lap 13, and Newgarden also demoted the #30 RLLR-Honda before the caution flag came out for Sage Karam spinning the Carlin-Chevy down to the infield as Felix Rosenqvist's Chip Ganassi-Racing Honda passed him to move into 16th. The Swedish rookie suffered a broken wing and a front-right puncture.

At the restart, Power held off teammates Pagenaud and Newgarden, Josef slipping inside Simon almost immediately to grab second, while Carpenter moved into ninth ahead of Dixon, and soon Scott would be knocked out of the top 10 by Herta and also passed by Conor Daly’s Carlin car.

Just a couple of laps later, Hunter-Reay – leader of the pack that stopped early – passed the Ganassi car to take 12th.

Power’s lead, which had reached 2.2sec, dwindled rapidly as he came to lap the battling Andretti Karam. Newgarden pounced and passed Power for the lead but a couple laps later the full-course caution emerged for sprinkles of rain.

Then out came the red and the cars headed back to pitlane on Lap 56 in the order Newgarden, Power, Pagenaud, Sato, Rossi, Ferrucci, Hinchcliffe, Ericsson, Carpenter and Pigot.

The race didn’t restart but under yellow IndyCar allowed the teams to pit, Newgarden emerging ahead of Power and Pagenaud, while Rossi’s crew jumped him ahead of Sato into fourth, the #5 Arrow SPM doing the same for Hinchcliffe ahead of Ferrucci. Ericsson ran eighth, Pigot ninth and Herta was 10th, but Carpenter dropped down to 14th.

Dixon’s crew had sent him the opposite way, having been down to 16th before the red flag, the Ganassi #9 crew got him back out in 11th having also added two turns of front wing.

Finally the race restarted on Lap 66 and Sato immediately got around Rossi and Ferrucci went around the outside of Hinchcliffe. Indeed, Ferrucci kept going and passed Rossi around the outside to grab fifth, but Rossi hung tough on the inside for lap after lap until Dale Coyne’s rookie pulled clear.

Further back, behind the two Arrow SPM cars and Pigot, Herta had been jumped by Dixon on the restart but got back ahead within 15 laps and left him to the mercy of Carpenter who wasted little time in passing the Ganassi machine.

Approaching Lap 100 of the 300 scheduled laps, Newgarden’s lead over Power was around half a second, with Pagenaud 3sec down but 2sec ahead of Sato who was having to keep an eye on his mirrors for the Ferrucci vs. Rossi battle just a couple of tenths behind. As they finally caught the RLLR car, Sato had to back off and let the pair past.

Finally Rossi got ahead of Ferrucci to claim fourth on Lap 112 and started pulling away from the rookie who would soon fall behind Hinchcliffe. The ECR cars of Pigot and Carpenter moved ahead of Ericsson into seventh and eighth, and Pigot also deposed Ferrucci.

Sato, who had fallen out of the Top 10 pitted on Lap 121, and immediately started trying to get his laps back, using his fresh tires to zoom past Rossi and Pagenaud. Carpenter moved past Ferrucci for seventh on Lap 137 but that became sixth when Pagenaud ducked into the pits. Pigot and Ferrucci followed suit next time by, and then Carpenter did the same.

Newgarden ducked out of the lead and pitted on Lap 142, and then Power, Hinchcliffe and Rossi stopped on 143.

Once everyone had stopped, Newgarden was back in front but now early-stopper Sato was in second, 3.4sec behind the leader and under intense pressure from Power, who passed him on Lap 148. Pagenaud, trying to complete a Penske 1-2-3, then ran up the track in traffic and had a wobbly moment that dropped him to sixth behind the charging ECR cars of Pigot and Carpenter.

Newgarden was by now coming up to lap the eighth-placed car of his closest championship rival, Rossi, who was trying to close on Hinchcliffe - who in turn was pressing Pagenaud for sixth place. Naturally, Rossi was in no mood to give up that lap but he had to give it up on Lap 182.

Sato, who had stopped early last time, stopped early this time too and had pulled in on Lap 180, leaving Pigot in third, 13.6sec behind Power, who was 2.5sec adrift of Newgarden. Then out came the yellow on Lap 187 as Sato, drifting up into the gray, was smacked into a spin by the understeering Carlin car of Karam, which was eliminated by the damage.

Under yellow, everyone pitted, and the field emerged with Newgarden still leading Power, with Pigot third ahead of Pagenaud, Carpenter and Hinchcliffe. That gave their rivals the chance to get a lap back on their rivals, Rossi emerging in seventh ahead of Rahal, Herta, and the impressive Daly.

The Lap 200 restart saw Newgarden retain his lead ahead of Power, while Pagenaud got around Pigot for third and Hinchcliffe passed Carpenter. Ferrucci passed seven cars – some lapped – when they got bunched up by Andretti, who was dreadfully slow and was running seven laps down. He would give up his struggle a couple laps later.

Newgarden pulled out a 1.5sec lead on Power by Lap 220, Pagenaud running 2.8sec further back but 1.3sec clear of the Pigot vs Hinchcliffe battle. Rossi in seventh, however, had fallen 3.5sec behind sixth-placed Carpenter and was starting to struggle to stay clear of Rahal and Zach Veach.

As had happened most but not all of the night, Power started losing out to Newgarden in traffic and dropped to 5sec behind by Lap 237, even briefly coming under threat from Pagenaud. However, Simon’s own issues in traffic would soon see him leading a train of Pigot, Hinchcliffe, Carpenter and Rossi.

Meanwhile, Ericsson moved up to 10th just before he dived into the pits on Lap 245. When he emerged he was so fast it prompted several cars to do the same.

Power slewed wide under braking for the pitspeed limiter and lost time trying to keep it from hitting the attenuator at the end of the pit wall, and that was enough to drop him behind Pagenaud who had pitted 5sec behind.

Power was given a stop-and-hold penalty for an improper pit entry and fell to 13th and one lap down. As he served it, out came the caution flag for Carpenter who had lost his car exiting Turn 2 in Hunter-Reay’s dirty air.

Meanwhile Dixon, who hadn’t stopped and had found himself running third, and when he stopped under yellow, Rossi and Herta did the same, with little to lose. They would emerge in sixth, seventh and ninth respectively. Up front, Newgarden led Pagenaud ahead of Hinchcliffe, Pigot and Rahal with a sick-sounding Honda.

Newgarden burst into the lead when the green flew with 24 laps to go, while Hinchcliffe worked his way around Pagenaud to put the Arrow SPM car into third. Dixon on his fresh tires also passed Pigot to move into fourth and with 15 to go, Dixon passed Pagenaud for third and homed in on Hinchcliffe. Two laps later, he was past the Arrow SPM car albeit 2.3sec behind Newgarden.

That was as far as the champion’s charge could go. Newgarden finished 2.8sec up the road, but in terms of salvaging a strong result, Dixon and the Ganassi tacticians had again proven remarkable.

Hinchcliffe scored his first podium of the season, just half a second behind Dixon, and four seconds ahead of Pagenaud.

Pigot got his best result of the season with Rossi claiming sixth ahead of teammate Veach. Rahal’s HPD unit held together long enough for him to claim eighth, while Bourdais took ninth and Kanaan scored a top-10 finish for Foyt.

Power, who had already ruined his evening, then made a poor final restart from 12th and came home only 15th.

Newgarden's championship lead over Rossi is up to 29 points, with Pagenaud third, 58 behind. Dixon is the final driver within 100 points of Newgarden, 99 back.