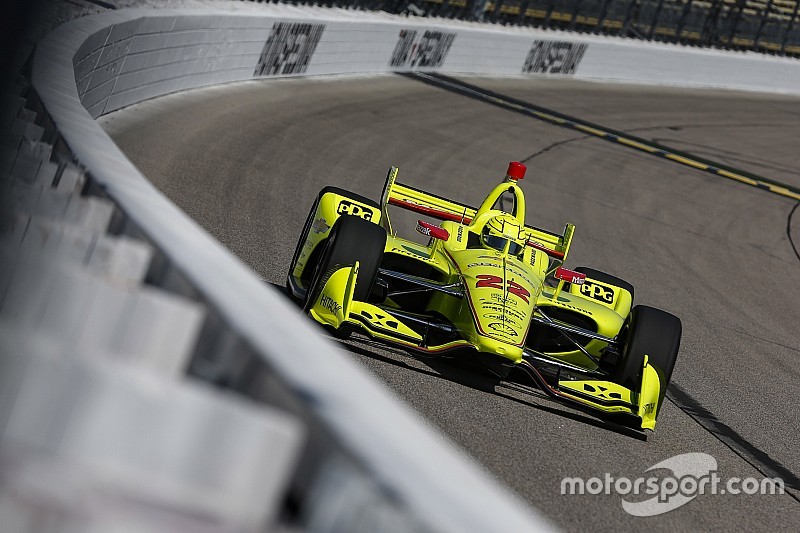 Simon Pagenaud led Team Penske-Chevrolet teammate Josef Newgarden in evening practice at Iowa Speedway as the teams tried race setups in conditions similar to those they’ll encounter in the first third of the race tomorrow evening.

Poleman Pagenaud's best time came on fresh tires at the start of his first stint – the fourth of the 84 laps he turned in total – and he sounded less happy with his car over in the second half of the session.

Nonetheless, he retained top spot with that 174.462mph lap although Newgarden ran him close with a 173.775.

The driver who made most progress compared with his qualifying effort was owner/driver Ed Carpenter who will roll off only 17th tomorrow evening for the Iowa 300, but was third-fastest this evening and seemed able to compete on the level with the Penskes over long runs.

Scott Dixon made a late surge to send his Chip Ganassi Racing car into fourth, fastest of the Honda runners, ahead of the highly impressive Carlin-Chevy of Conor Daly.

Late in the session Harding Steinbrenner Racing’s Colton Herta improved to sixth, top rookie and faster than any of the sister cars from the Andretti Autosport stable.

Marcus Ericsson had a couple of alarming moments in his #7 Arrow Schmidt Peterson Motorsports-Honda – one when he got loose following another car and slithered up into the gray, and the second moments later when he again flirted with the wall as his tires still weren’t clean from the first incident.

Nonetheless, the ex-F1 driver, who qualified 10th, continued to impress with seventh-fastest time, ahead of the third Penske of Will Power.

Ryan Hunter-Reay and Alexander Rossi completed the top 10 for Andretti Autosport ahead of Spencer Pigot in the second Ed Carpenter-Chevy.