IRL: A. J. Foyt gets his own cereal box

Besides his four victories at Indianapolis, Foyt is the only seven-time Indy-style national champion and the only driver in history to win the Indianapolis 500, Daytona 500 and Le Mans 24 Hours. Foyt retired in 1993 as the all-time leader in Indy-style victories, with 67. 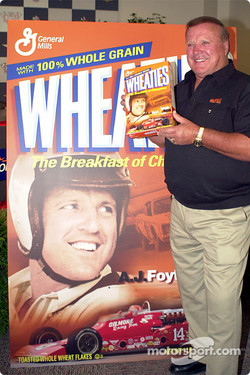 "Every race car driver dreams about winning the big race," Foyt said. "I was fortunate enough to win my share of big races, including the Indy 500 four times. Now to be back in Indy to unveil this Wheaties box is very special. Wheaties is the Breakfast of Champions, and I am honored to be counted among those champions."

The soon-to-be-released 18-ounce package will be available throughout Indiana, Michigan and the southeast United States starting in June. For Foyt fans outside the distribution area, a limited number of packages can be purchased for a limited time by calling (952) 814-2900.

Foyt, now an owner of a two-car Indy Racing League team, continues the long tradition of motorsports stars being featured on Wheaties boxes. Three-time Indianapolis 500 winner Wilbur Shaw was the first driver on a Wheaties box, in 1936.

"A.J. Foyt's incredible career makes him one of the greatest drivers of all time," said Brian Kittelson, Wheaties marketing manager. "We are thrilled to welcome him into the Wheaties family."