Will there always be an Indianapolis 500? Presumably so, but this year no one knows definitively when, since weather prognosticators are signaling rain possibilities from Thursday at least as far as Tuesday. Remember 1986 when Bob Rahal waited a ...

Will there always be an Indianapolis 500? Presumably so, but this year no one knows definitively when, since weather prognosticators are signaling rain possibilities from Thursday at least as far as Tuesday. Remember 1986 when Bob Rahal waited a week to win? Once the race gets rolling, there's a better than even chance that some contestants will be taken out before the end of the first lap. This occurred in 1930, 1933, 1936, 1941, and 1949; but the multiple first lap pileups did not start until 1957 when Speedway CEO Tony George's father Elmer plowed into Eddie Russo on the backstretch during the pace lap. That incident initiated a series of botched starts that are still as much the rule as the exception.

Since then, initial lap single and multi-car crashes have become one of the track's least attractive traditions, as for example in 1958, 1959, 1966, 1970, 1973, 1982, 1986, 1988, 1991, 1992, 1993, 1995, and 2001. This happens partly because (as photographs reveal) there has not been an orderly Indianapolis green flag form-up since 1950, and because some drivers still disbelieve the old bromide that races aren't won on the first lap. This year will be no different, since time trailing is patently useless except to determine who races and who doesn't. Once the track goes green there will not be one row in proper alignment. 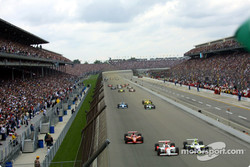 The start.
Photo by indyracing.com/Ron McQueeney.

The Indy Racing League's whipcracking Brian Barnhart has been saying that the 86th Indianapolis 500 could go any of 25 ways, and he's probably correct. As a rule, the race usually goes to a contestant to whom nobody's been paying any particular attention. Of the six 2002 starters who have won Indianapolis before, Al Unser Jr. and Arie Luyendyk have triumphed twice at and, if they're not too long in the tooth, might find a way to do it again. Eddie Cheever, Helio Castroneves, Buddy Lazier and Kenny Brack have all scored once at the Brickyard and, if running Indy is anything like peddling a bicycle, could pull it off a second time. If this were a thoroughbred race, however, we wouldn't put too much on the noses of Sarah Fisher, Rick Treadway, Richie Hearn, Alex Barron, Shigeaki Hattori, Greg Ray, George Mack, Mark Dismore, or even South African rookie hot shoe Tomas Scheckter whose modest intention this May was to win the pole and the race.

What makes the 86th look so compelling is the influx of CART-identified quick draws like Tony Kanaan, Max Papis, Paul Tracy, and Dario Franchitti, many of whom have been salivating over Indy for a good many seasons without having it be politically accessible. Their competition comes from IRL regulars such as Jeff Ward, Billy Boat and Airton Dare who know the equipment better and understand the prevailing way that IRL runs its races. 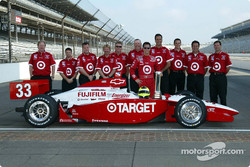 Others have old scores to settle. In a dozen attempts, Michael Andretti has finished only twice at Indianapolis, and wants keenly to win the same Borg-Warner trophy (the one with a nude man brandishing a racing flag) that his father Mario did in 1969 in one of his 29 make-or-break Indianapolis attempts. Scott Sharp, still smarting after crashing out last year on the first lap after having started on the pole, wants desperately to look sharp this time. Robbie Gordon, a West Coast firebrand who has finished in the top six in four of seven attempts, needs badly to get the Indy monkey off his back. Sam Hornish who believed he was a winner last year until he spun out, will be playing to win this time. Forty-four year old Raul Boesel who has never won an Indy car race, now has the best and brightest chance in his career that hasn't many laps left.

It is likely that, as they say, the race will be won this year in the pits, meaning not only that drivers must receive impeccably slick in-and-out pit service, but that pitside strategists must control track position and thereby control the race. A.J. Foyt, Roger Penske, and the brothers Green know how to orchestrate winners. A driver's assignment is to go fast, refrain from hitting anything, and take orders gracefully. Whatever shakes out, observers can expect the unexpected that Indianapolis unfailingly dishes out.

Where are they now? – Donnie Allison