INDIANAPOLIS, October 22, 2003 - Driver Tony Renna, 26, was so looking forward to his new slot as teammate to Scott Dixon at Target Chip Ganassi Racing. The duo had partnered at PacWest Racing Group while competing on the Indy Lights ladder circuit ...

INDIANAPOLIS, October 22, 2003 - Driver Tony Renna, 26, was so looking forward to his new slot as teammate to Scott Dixon at Target Chip Ganassi Racing. The duo had partnered at PacWest Racing Group while competing on the Indy Lights ladder circuit in the 2000 season and were good friends. That changed today. 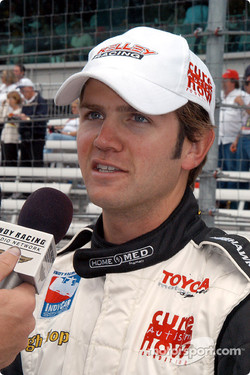 It was the Deland, FL-born pilot's first time in his ride for the 2004 Indy Racing League IndyCar Series campaign. At the IRL Texas finale, Renna had expressed his delight with the prospect of beginning the test season so early and was looking forward to his debut with the 2003 IndyCar Series championship team.

Renna's car became airborne and hit the turn 3 debris fence at approximately 9:20AM this morning on his fourth flying lap as a Team Target driver. He was transported by ground to Methodist Hospital and was pronounced dead on arrival at that facility.

Renna's death marks the 67th fatality at the Brickyard. He was, as George noted, a rising star in the League, having driven only seven races - all for Kelley Racing, where Renna served as test driver over the past two seasons - and had a superb finishing record.

Renna owned five top-10 finishes and, as a rookie this past May in a third Kelley car sponsored by Cure Autism Now, placed seventh from eighth on the 33-car grid in the 87th running of the Indianapolis 500 Mile Race.

Al Speyer, executive director of Firestone Racing spoke for the company when he remarked, "We were incredibly saddened to learn that Tony Renna lost his life today during a Firestone testing session at IMS. We extend our deepest sympathies to his family and his fianc?, to his team and to his many friends and fans.

"Times like these are always difficult," Speyer reminded, "and this loss in particular will be felt deeply by the Firestone family. Tony had spent many hours attending events and volunteering his time on our behalf. He was always willing to give of himself or lend a hand when we called upon him. His unselfish and giving nature makes this tragedy all the harder to bear. Tony was a talented driver who will be long remembered by all who knew him or had the privilege of working with him."

Tony Renna was one of those drivers who always merited a top-line open wheel drive but never seemed to garner the attention necessary to achieve the status he deserved. Chip Ganassi's decision to hire the Las Vegas resident came as a surprise to many, as Ganassi has been known to cherry- pick foreign drivers more often than looking to American-bred open wheel talent.

Ganassi told the Indianapolis Star that Renna had just turned 218 prior to his collision, which some on the scene said looked a great deal like the incident that injured Kenny Brack at Texas Motor Speedway a week and a half ago.

Renna was overjoyed when he was signed October 1st to partner his good friend and former teammate Dixon, the 2003 IndyCar Series champion. "This is a great opportunity for me," Renna declared at the time. "Team Target is a first-class organization dedicated to one thing: winning. When the opportunity came up, it was hard to keep the smile off my face."