Johnson, whose last open-wheel action was piloting a McLaren Formula 1 car in a car swap with Fernando Alonso at Bahrain, was supposed to try an Arrow McLaren SP-Chevrolet in April at Barber Motorsports Park, but all racing activity was halted by the coronavirus pandemic.

Then in late June, it was announced that he was to pilot a Ganassi-Honda on the IMS road course on July 8, but this plan was stymied by Johnson testing positive for COVID-19.

However, yesterday, July 28, the plan with Ganassi came together and Johnson tested Felix Rosenqvist’s NTT DATA #10 CGR-Honda with a limited number of team personnel that nonetheless included Chip Ganassi himself, along with Hull and Dixon.

Afterward, Johnson tweeted a one-minute video along with the message: “Today was incredible. Sign me up for more!”

Dixon said afterward, “It’s been a lot of fun. It’s been on again, off again for Jimmie for a lot of time through different reasons, backing up to Alabama with another team and then his COVID situation. So it was nice that the third time was the charm to get out here.

“Tough conditions, really low grip, and obviously very hot today [87degF ambient, up to 135degF track temperature] but it gives him a good feel of what the car’s like and through the course of the day it’s been a lot of fun just to kind of talk back and forth about what things are different for him, what are quite similar in driving style. And a lot of video to go through because what he typically does is so different from what we do.

“He’s honestly been a very good listener and very able at replicating video which is not always very easy to do. So he sees something in the data or on the video and he’s actually able to replicate it which is pretty cool. So it’s been good.” 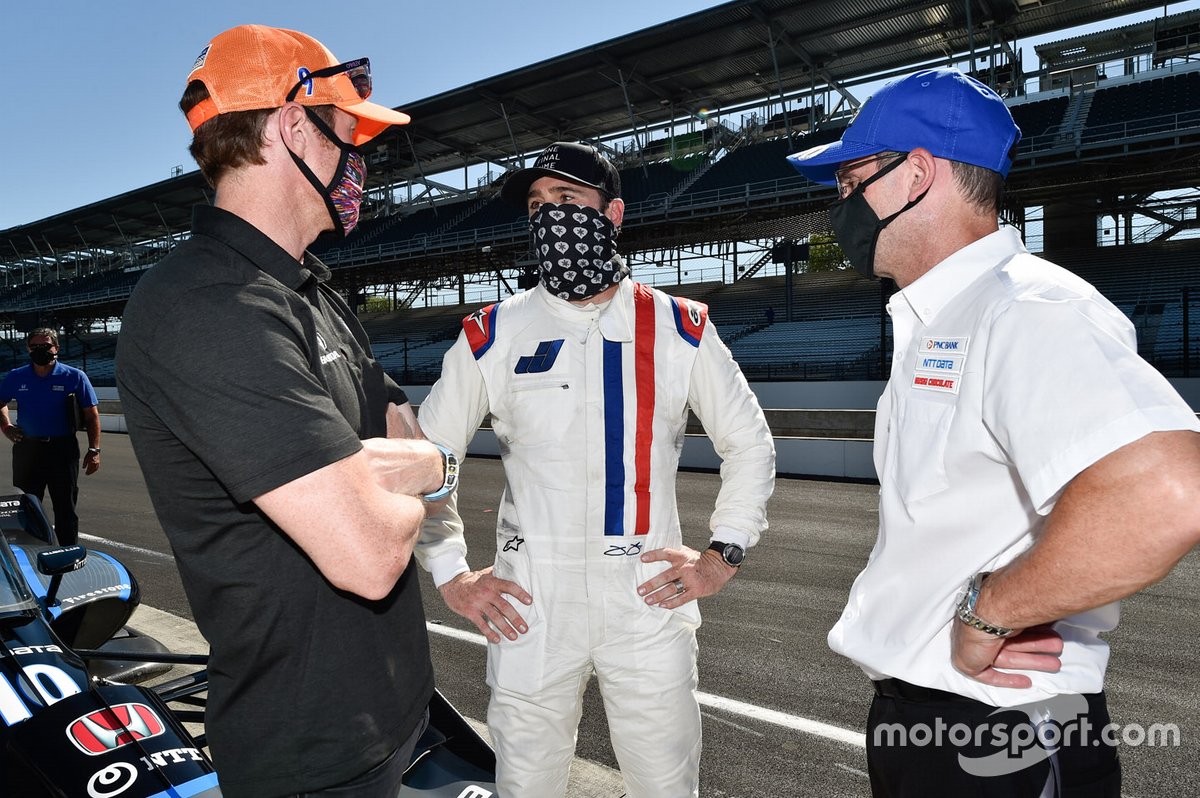 Motorsport.com late caught up with Hull, who was left suitably impressed.

DML: How much work did the Ganassi team do with Jimmie beforehand?
MH: He was on the Dallara simulator – which is very good – for half a day with two of our engineers and I think that was very productive.

So how did it go from the team’s perspective?
You always have an idea of how these things are going to roll but it actually turned out much better than even I thought it would. If we’d have scripted it, I don’t think it could have come out any better really – and a lot of that is to do with Jimmie himself. He’s such a consummate professional – he does everything right. Those guys down at Hendrick Motorsports, they see it every day and we see it with our drivers that we had or have. But Jimmie comes to the racetrack to go to work – and it was fun.

How many laps did he do?
Well we had five sets of Firestones, and a stint there is 24 laps…. We did 24-28 laps on each of those five sets, and we ran all day.

He got a little excited at the start of the day in a couple of the braking areas and stalled it after he spun back around but he didn’t hit anything – not even grass or gravel – and just stopped on the track. But once he got that out of his system, he was very good all day.

And having Scott Dixon there to talk through the differences in driving style of a Cup car and an IndyCar was of course very helpful. The power levels of the cars are probably very similar but the power-to-weight ratio is very different, and what you can do with the car and the attitude that it has mid-corner and how late you can take the braking down to the corner even with one unloaded wheel…

So for Jimmie to have someone there telling him what to expect made a big difference to him. They spoke even before we ran today and then spent a lot of time between runs going over that information. I think that was probably more helpful than people realize. 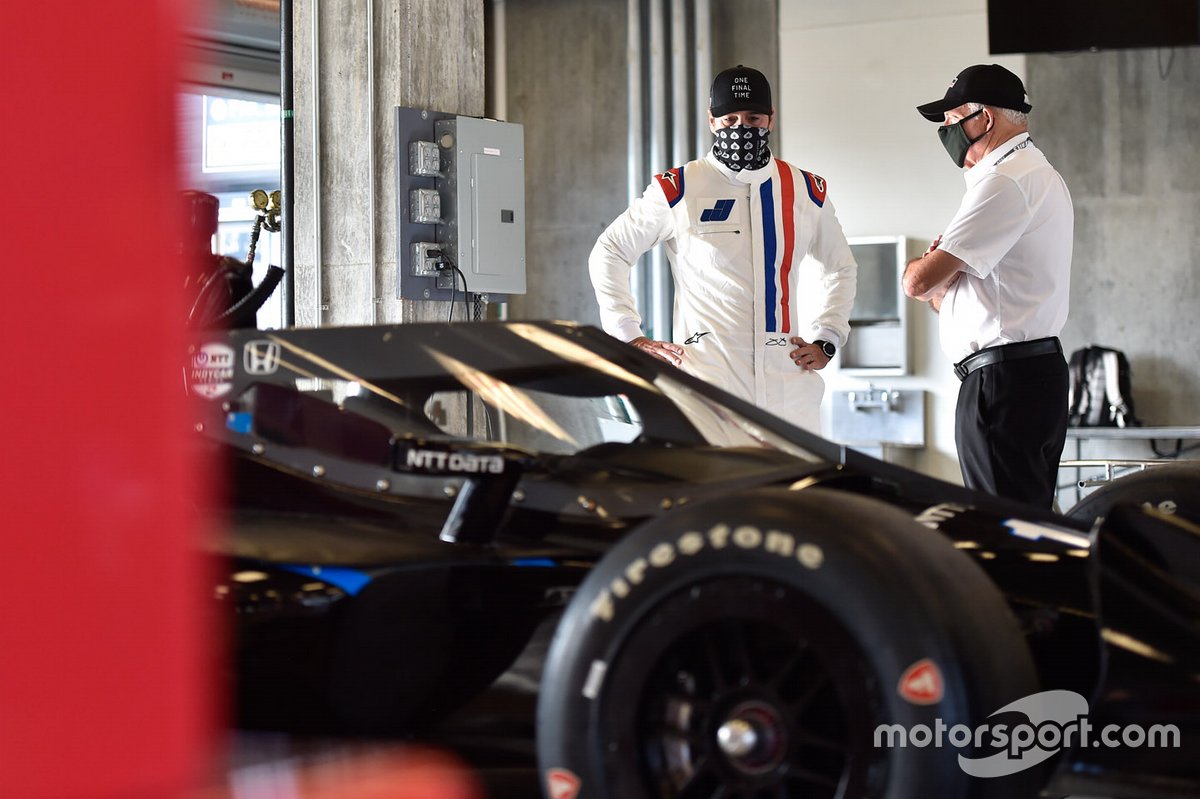 Scott said Jimmie was really good at replicating what they were seeing on the video…
Yes! And Felix is like that too – we get to see that a lot. Scott and Jimmie went over a lot of video during lunchtime and then the pair of them went out in a street car on the racetrack so Scott could give some more advice, and then Jimmie got back in the IndyCar for his first afternoon session and went out and replicated what they had discussed. It was pretty impressive!

How was his fitness?
Let me put it this way, we’ve had it happen before – not lately – but when a guy’s fitness isn’t correct, in the early afternoon, when you’re on the intercom you start to hear him heavy breathing. Well with Jimmie, we didn’t hear that all day. You know, I thought sooner or later we’re gonna hear this guy fall out of the saddle, he’s going to realize how difficult this thing is, but no. I think I need to follow him around on his mountain bike in Colorado. He’s in very good shape. Tomorrow he may be a bit sore, but in terms of getting after it all the way to the end of the day, he wasn’t affected by the physicality at all.

So I guess – and I realize it’s not our business – that either his COVID-19 test was a false positive, or being an outstanding athlete, he bounced back very quick. He only missed one NASCAR race, after all and he got two negative tests within seven days of the positive…
I didn’t ask him about that, but I’d definitely agree – he is an outstanding athlete.

Obviously he’s used to sitting behind a windshield, but what did he think of the cockpit heat with the aeroscreen?
He was fine. Actually, he was better than that. IndyCar had asked us if we could run some trial pieces – revised cockpit cooling devices, for both the helmet and for improving airflow inside the cockpit. Bill Pappas [IndyCar VP of competition] and Tino Belli [IndyCar director of aerodynamic development] arrived with a big box of parts to try. And Jimmie was really good at saying, ‘This helps, this doesn’t help, this one aids the airflow,’ and so on. But he never once voiced any negative concern about the heat; he just gave them his straight feedback.

You say he basically ran five stints. Were they getting faster toward the end of the day?
Oh yes, he did. Not significantly faster, but faster. So considering it was 130degF track temp and he was the only car out there so there wasn’t a lot of rubber going down, that did show improvement. Because of those circumstances, it wouldn’t be fair to compare his lap time with what we ran on blacks [the harder primary tires] at the Grand Prix of Indianapolis at the start of this month, but in fact he wasn’t that far off.
Our guys have got a clever program of looking at track temp and amount of rubber down and coming up with a proper analysis to give to Jimmie and let him know where he really was in comparison with the times our IndyCar drivers turned on primary tires, but I think he really held his own.
Actually, I think he surprised himself a little. He probably didn’t know what to expect, but he should be pleased that he performed well. 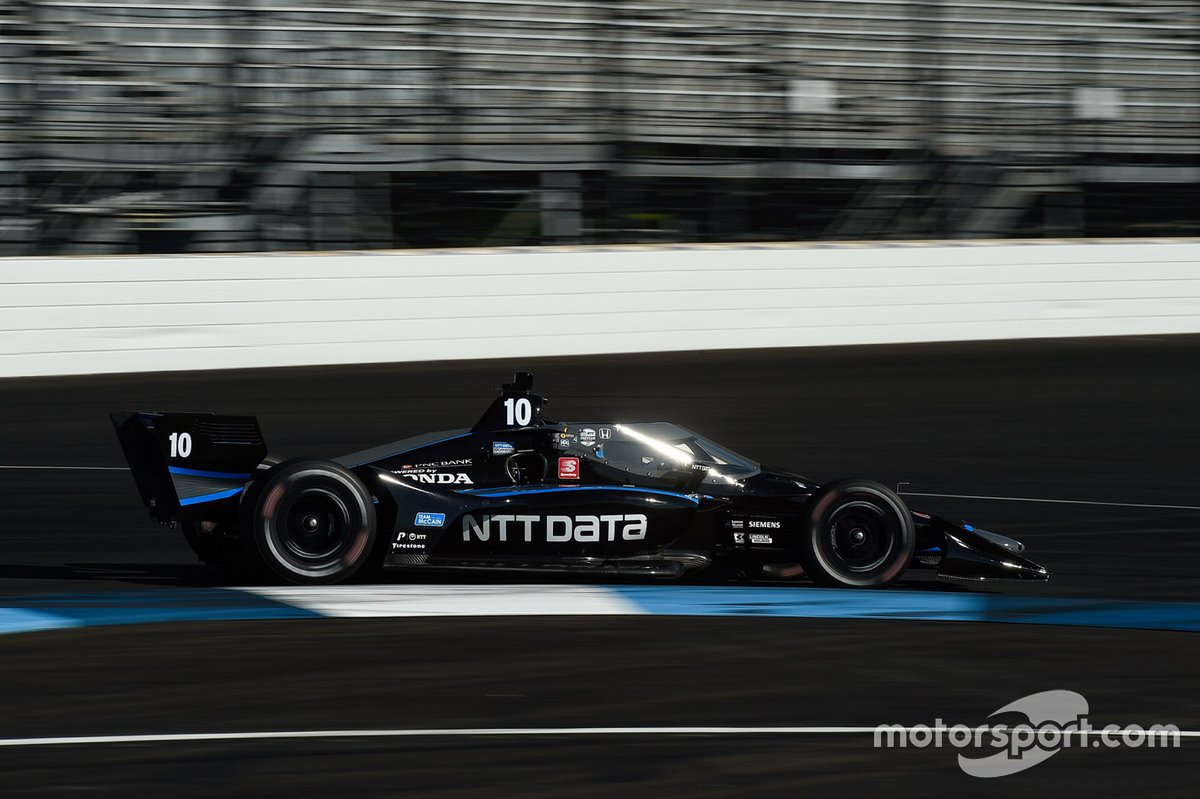 Chip’s a hard man to impress. Was he impressed?
Ha! You know, I think Chip was impressed. He said, ‘We know what champions do well – and he does all of those things right.’ And so I think he liked what he saw. He was there for a good portion of the day, and was paying close attention on the timing stand and listening on the headset. He was well into it.

If you had to pinpoint where Jimmie needed most improvement what would you suggest? Is it getting on the power earlier, braking later, putting faith in the amount of lateral load through fast turns…?
Well, here’s the difference between IndyCar drivers in my opinion. In order to be quick in an IndyCar, it needs to be on the edge of neutral, and it takes a fine art to understand what that sensation really is, and that’s the separator between good IndyCar drivers and great ones. Good IndyCar drivers understand when they don’t have those sensations, but the great ones understand how to make up for it when they don’t have it.
So any driver who wants to race IndyCars has to first learn what that sensation is, has to fully comprehend when the tires begin to degrade, what’s going on with the rear of the car. Because when it breaks loose, it’s done. And if it’s set up to go fast and it breaks loose, it’s really done! You either opposite lock the thing and get passed by 10 people or you hit the fence. So I think that’s the denominator of everything an aspiring IndyCar driver needs to acknowledge and learn.

Well, congratulations to all of you for making it happen. I still consider it surprising that Jimmie’s first IndyCar test happened with you guys, but I guess the best attract the best…
Well, Jimmie contacted us and he simply asked if we would do it. We said, ‘If we can get permission from everybody, then we’d love to do it.’ Doug Duchardt [Ganassi’s COO] used to work for Hendrick so there was a connection there and that helped.
But as you can imagine, we had to get permission from both Chevrolet and Honda as well as IndyCar. At a time when everything has been shut down because of the COVID pandemic, IndyCar has found a way to allow anyone to do what we have done with a driver evaluation test, providing it meets COVID health and safety requirements – which we did of course.
And obviously we needed permission from Rick Hendrick, his team owner, because Jimmie needs to show up at New Hampshire this weekend without any scratches on him! It was a little bit of an ordeal to get everyone signing off on it, but well worth it.

Given that NASCAR has removed the practice and qualifying sessions this year, and that IndyCar’s Harvest Grand Prix at the IMS road course is a double-header on Friday and Saturday Oct.2-3, do you think there’s a chance that Jimmie could race for you guys that weekend and then fly down to Talladega for the Cup race on Oct. 4?
Well, that’s really more of a question for Jimmie. But if you asked me ‘Do you think he could do it?’ my answer would be ‘Yes’. Can he race an IndyCar? Yes, and he would do all right. I don’t know where he would stack up, but I don’t think he’d be publicly sorry that he did it… 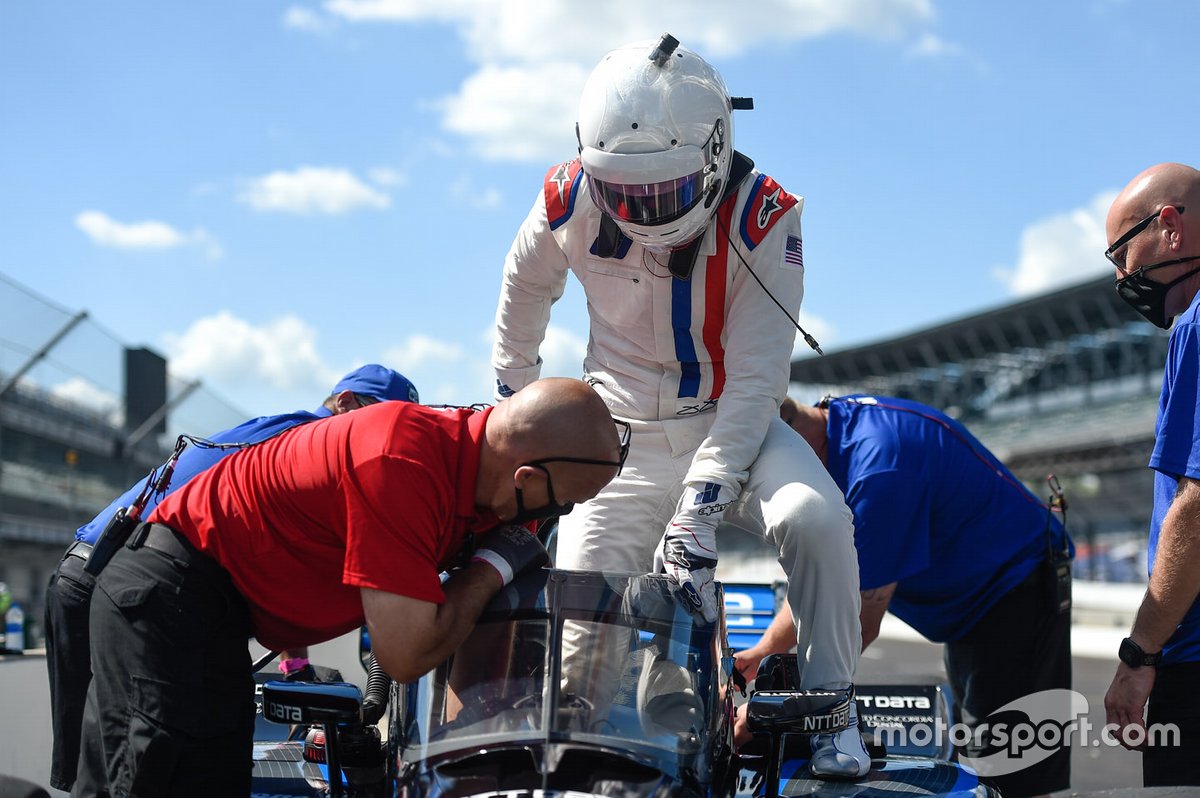 Dixon “didn’t have the pace” to fight for Laguna win