Having won the 2013 Indianapolis 500 just two weeks ago, Tony Kanaan is reasserting his prowess on ovals.

Ft. Worth, TX - Kanaan grabs his second podium finish in his second oval race of the season. The driver of the No. 11 Sunoco Turbo KV Racing SH Chevrolet Firestone car roared through the field to a third place finish in the Firestone 550 at Texas Motor Speedway. Having won the 2013 Indianapolis 500 just two weeks ago, Kanaan is reasserting his prowess on ovals, gaining ten positions from his starting spot of 13th. Tonight's finish moves the Brazilian into fourth place in the championship. 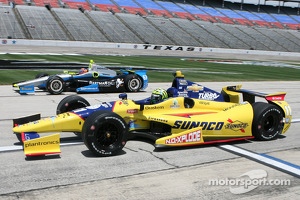 "First of all it was a great job by the team and I'm very happy to give Sunoco and Turbo this podium on their first race with us," Kanaan said. "On our strategy we were actually counting on a yellow toward the end of the race which would have put us in a very, very good position for the win, but I'll take third place here any day. The next stretch of races should be very good for us. We're fourth in the championship and we think we can keep up the momentum from the win at Indianapolis going forward."

Jimmy Vasser, team co-owner was hoping for back-to-back oval wins. "The yellows didn't really fall for us on TK's car," he said, "but we gave it a good push. If there were ten more laps I think we would have been there, or if we'd have had a yellow when he got around Helio I think that because we were so much stronger they would have been sitting ducks and we would have had a shot at it. But, we're really proud to finish third and happy for Sunoco, "Turbo", Mouser, a local sponsor, and all of our sponsors. Simona looked like she had a great drive going. It was unfortunate with her penalty. We'll get them next year.

De Silvestro, driver of the No. 78 Nuclear Clean Air Energy car had a penalty ridden weekend. Although qualifying 12th, the Swiss driver started 22nd today due to a ten-spot penalty for an engine change after Detroit and received another penalty during the race that cost her what looked to be her best finish on an oval. De Silvestro was running 13th and was making a strong push forward when she received a 30-second stop and go penalty for passing the pace car which dropped her back to 22nd. She continued to push hard the rest of the race passing several cars on her way to a disappointing 16th place finish.

"The car was awesome all night and we just kind of got unlucky out there," De Silvestro said. "First of all with the yellow; when it came out we were stuck behind the leader. We fought our way back and then we got a 30-second penalty; I don't really know why. But, at the end of the day, the car was awesome and I think we could have had an awesome finish. We learned a lot. I think for me it was a really good experience. It was just a lot of fun out there racing and passing people. Big thanks to the team; they did an awesome job the whole week. They gave me a really comfortable car out there, so big thanks to them, Chevrolet and Nuclear Clean Air Energy."

Steve Moore, team manager, was proud of the job both of his drivers did. "Simona drove a heck of a race," he said, "but unfortunately she had a blend-line infringement that cost her a stop and go penalty. We feel it was a very harsh penalty, but she came back and drove back through the field finishing 16th. What a great drive by Tony; starting 13th and finishing third. He had a strong car all day and had an excellent drive. Both drivers were outstanding."

The team looks to continue their strong performances on ovals next weekend in Milwaukee, WI for the Milwaukee IndyFest. The race will air live on ABC June 15th at 4:00 p.m. ET. You can also catch the 2013 Indianapolis 500 winner Monday night on the "The Late Late Show with Craig Ferguson".

Andretti Autosport all drivers are top-ten at Texas Motor Speedway