Kanaan finishes 12th, De Silvestro crashes on lap 8 in Race 2 of the Dual in Detroit

Simona De Silvestro wasn't exactly sure when she got out of the car as to what happened to put her in the wall, but she was certain that she was disappointed to be out of the race so early.

Detroit, MI - KV Racing Technology wrapped up the Dual in Detroit disappointed with the results as Tony Kanaan, driver of the No. 11 Hippino-KVRT-SH Racing Chevy Firestone finishes 12th and Simona De Silvestro, driver of the No. 78 Nuclear Clean Air Energy car crashes on lap 8 finishing 24th. 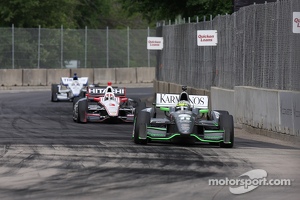 It looked like the No. 11 car was going to bring home the result the team had been looking for all weekend with Kanaan leading during one stint of the race. However, the team's strategy fell just short as the Brazilian driver had to dive into the pits late in the race for a splash of fuel.

"We gambled on the strategy to try to get upfront," Kanaan said, "but because the way that the yellow flags played out we didn't get the most of it. The timing was wrong and by the end of the race I had to pit for fuel, which dropped me back to the end of the line.

I still have to thank the guys from Hippino.com for coming on board for this race, they we're awesome. Let's turn the page and focus on Texas next week. We had a good race going last year at TMS and I believe that we'll be fast there again on Saturday night under the lights."

Jimmy Vasser, team co-owner, was disappointed as well, but thinks the team will rebound nicely in Texas. "Well it's definitely not the result we wanted to put up for Chevrolet at their home race here at the Dual in Detroit," he said. "However, we'll take our lumps and try to learn from our mistakes and go to Texas.

I feel bad for Simona. It looked like she was really driving hard at the beginning of the race; she moved up and looked a bit like TK there following him through the pack. She was looking racey and it was just unfortunate that she ran over some piece of metal and got a puncture that took her out of the race.

We were proud to represent Hippino.com, a new mobile app that will be coming out July 15th. The car was beautiful and it was fun to have the team mascot, the Hippo, on pit lane. But, other than that it was a pretty tough weekend for us. We're hoping to come out swinging with a nice new announcement for the car 11 on the sponsorship side coming up this week."

De Silvestro had a miserable day crashing on lap 8 in turn 8. The Swiss driver wasn't exactly sure when she got out of the car as to what happened to put her in the wall, but she was certain that she was disappointed to be out of the race so early.

"A puncture on the right front tire kind of ended our day pretty abruptly," she said. "I went into the braking zone and the tire was flat so it kind of locked up and at that point you can't really steer or do anything. I ended up in the wall which was definitely frustrating because it was on lap 8 and you never want to be out of the race so early.

But, I felt like we moved forward quite a bit on the restarts and I think we would have been ok during the race. The Nuclear Clean Air Energy car was ok and we were moving forward, but now we have to look forward to Texas. I think we can be pretty competitive, especially with the cars we've had on the ovals; especially at Indy. Texas is a different beast, so hopefully we'll be alright and have a really good race there."

Steve Moore, KVRT team manager, is determined to turn things around for Texas. "It was a disappointing day for Simona," he said. "She had a strong run going, but unfortunately a cut in the tire caused her to crash and be out of the race early on.

Another disappointing day for Tony; he was having a very strong drive, but unfortunately he just didn't have the car under him to move through the field and get the result we were looking for. We have a lot of work to do when we get back to the shop. We'll regroup and head to Texas."

The team heads back to Indy tonight and will begin preparations for Texas bright and early tomorrow morning. Tune in Saturday, June 8 at 8:30 p.m. ET to ABC's live coverage of the Firestone 550 at Texas Motor Speedway to see how well the KVRT drivers attack the second oval of the season.

Disappointment in Detroit for Justin Wilson