Tony Kanaan average speed of 187.433 was the fastest Indianapolis 500.

INDIANAPOLIS - Tony Kanaan realized a dream that began decades earlier that took him from Brazil to Europe to America. 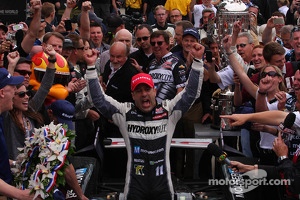 Kanaan, cruised to the checkered flag under caution when three-time champion Dario Franchitti's No. 10 Target Chip Ganassi Racing car made contract with the Turn 1 SAFER Barrier on a Lap 197 restart. He found himself in front after he and rookie Carlos Munoz overtook race leader Ryan Hunter-Reay entering Turn 1 on the restart for a Lap 194 on-track incident involving Graham Rahal.

As he circulated under caution, Kanaan wiped tears from his eyes as he guided the Chevrolet-powered No. 11 Hydroxycut KV Racing Technology/SH Racing car to the waiting Borg-Warner Trophy.

Andretti, who started third in the No. 25 RC Cola car and led 31 laps, wrestled the points lead from Takuma Sato after five of 19 races. He leads Sato, 168-157, heading into the inaugural Chevrolet Dual in Detroit presented by Quicken Loans on the Belle Isle circuit June 1-2.