Kimball Q&A on Carlin progress, that top-five finish, and prospects 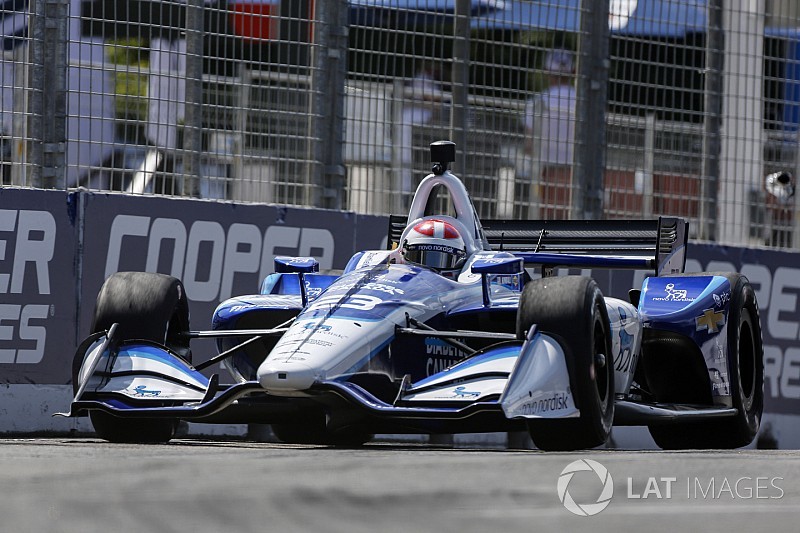 Notwithstanding Scott Dixon’s perfection and a fine result for Canadian fans, the hero of the Toronto IndyCar race last weekend was Charlie Kimball finishing fifth for Carlin. He talked to David Malsher about driving for a rookie IndyCar team.

DM: Coming into the Toronto weekend, did you feel that a top-five finish was possible?
CK: I felt we had a really solid foundation in terms of setup coming out of Detroit, our previous street course. And every weekend, whether or not we’ve tested at a track, and come in with a baseline setup, we make progress, we learn, we move the car forward in terms of competitiveness.

I think the whole team felt disappointed by qualifying [Kimball and Max Chilton lined up 20th and 18th respectively] because it didn’t showcase how competitive we felt we were. But then on Sunday we had the opportunity and when we got a clear track, we were able to do the laptimes. And then came that last pitstop, where we were under pressure – if we do a good job, we’re in with a shout of a top five, and if we don’t, we’re outside the Top 10. But we love that pressure, being able to influence the result and the crew were rock-solid.

So we leapfrogged three cars, gave one spot back to Hinch – so we went from eighth to fifth, then back to sixth. But then Marco had to make his last-minute pitstop and that elevated us to P5. And even over the last three laps of the race, we were running down James – we were just half a second behind – and had he made a mistake we’d have pounced, but he didn’t.

But we were very happy because I think it’s an indication of how far we’ve come all year.

When a drivers stats show he went from 20th to fifth on a street course, it’s easy to think ‘that was luck on a day of attrition’, but it’s not luck if the guys ahead of you screw up and you don’t.
Yeah, they say luck is when preparation meets opportunity, and we were prepared and when our opportunity came up, we made the most of it.

How tiring was it in that heat at such a physical track in terms of the bumps causing both vertical forces and constant steering kickback?
It takes a lot out of us, but you just have to be physically and mentally prepared. It wasn’t particularly hot [mid-80s], certainly not like Texas, for instance, but it was much more humid and being on a street circuit vs a 200mph oval definitely makes a difference in terms of physical demand.

But I was definitely less fatigued after 85 laps at Toronto than I was at Iowa, because of the mental challenge of holding onto a car for 300 laps around a short oval.

Do you consider that fifth place as a bigger deal, given the circumstances, than your first podium at the same track with Ganassi?
It does feel special, yeah. I remember the 2012 race fondly, and thinking, ‘OK, I’ve got my first podium, now I need to get my first win’, whereas the top five this year felt good for the guys on the Carlin team. They were part of it with their pitstops, they were part of it with the long hours they’ve put in, the work ethic they’ve shown. They’re the first in and the last out of the paddock, and they’re doing it with smiles on their faces, and without getting chippy. That’s a real indication of their character.

So last Sunday was Carlin’s banner day thus far, but I’ve also been impressed by the team’s oval pace. Aren’t ovals where rookie teams traditionally struggle most because there’s so much fine detail to find to go quick, and drivers can’t do so much to compensate for a car deficit?
Ovals are tricky, yeah. We were pleased with qualifying at Iowa [where although only 17th out of 23 cars, Kimball outqualified an Andretti car and a Carpenter car] but we still didn’t get it right. And that’s actually what’s most encouraging – we knew there was room to go, and we know more about how to find it. It’s that kind of thing that is most promising for the long term.

Phoenix was trial by fire, and by a lot. But at Indy, you get the time to build up, to get into the details, and I think we performed well and executed well with both cars [qualified 15th and 20th of the 33 starters]. And at Texas we qualified 12th! I walked into the truck and my race engineer’s eyes were as big as saucers, and he was like, ‘You go how fast around here?!’ [Matt Greasley last year worked in Carlin’s Indy Lights team, and Indy Lights don’t race at TMS.]

But yeah, in Texas we had fast cars in qualifying and the race. I felt terrible for Marco at Toronto because I could relate to it – we made the same mistake at Texas and instead of finishing between sixth and eighth, we were 10th. That was hard to swallow at the time, but we win as a team, we lose as a team, we can finish fifth as a team or we can finish 20th as a team. But when you have those learning moments, the important thing is how well you learn from them – and I can say that, as a team, we’ve kept moving forward because when we make mistakes they happen only once.

You were fast in testing at Mid-Ohio this week (P1 in the morning session, P6 in the afternoon out of 11 cars). Is that encouraging or should we not read too much into it?
Even setting aside the lap times, it’s 100 percent encouraging because it means when we show up for the race there next weekend, we won’t be a session or two behind the others while we get the basics sorted. We sorted those basics on Tuesday morning and then myself and Max worked through an extensive test plan, finding what works and what doesn’t work. We gave ourselves a good indication and direction, so we come back next week with a strong plan for practice.

What do you think have been your most appreciated qualities in a team that is hugely experienced in racing, but hugely inexperienced in IndyCar? Is it the ability to climb through the field on raceday?
I think the team appreciates the feedback I can give and that Max can give, to develop the car as much as possible. Max has outqualified me the majority of the time this year and I’m trying to learn from him how to be better with these cars. But with reference to making progress on raceday, I think that comes from experience and knowing who you’re racing and the way the races develop.

I’m pretty happy with how the year has gone. Apart from getting a puncture at Indy GP and getting taken out at Barber, we’ve had good results, we’ve learned and progressed. It was a case of jumping in at the deep end with sharks on our debut at St. Pete, but ever since then, we’ve managed to go forward.

Pocono was scene of your second ever podium finish in IndyCar. Is that another oval where you and Carlin can overdeliver on expectations, despite the team’s inexperience at that track?
I think based on how we performed at Indy and Texas, that positive reinforcement will carry forward to Pocono, yes. It is one of those places where the margin is a knife-edge, and I’ve been on both sides of it – stood on the podium but also hit the wall really hard. But yes I think with my experience and Max’s perspective, we come at problems sometimes very differently, so the way we interact in the engineering office and the way we work together means we elevate each other.

What can you achieve over the last five races of the season?
I think having gotten our first top five, the next goals are obviously our first podium and our first win. We need to qualify better, so we’ll continue to work on that and focus on that, and I’ll continue to learn from my teammate for that.

The other encouraging thing is that at the Barber test we got a morning of running in before the rain-out, and when we came back for the race we were able to qualify 13th and 14th. So hopefully we can carry our testing form at Mid-Ohio through to the race, and then we have a test before Portland, a test before Gateway and a test before Sonoma, so again we have those chances to build our database before we get to the weekend.

As far as a body of work for the whole season, we’re doing respectably with 16th in the championship, and if we can keep gaining ground on the guys ahead and get into the top 15, I think that would be a solid start, a good flag in the ground for Carlin in its first IndyCar season.

Bryan Herta: There is “real interest” in Colton within IndyCar